Which of these two major entertainment mergers do you think is weirder?

I think the former was kind of weird because the forst merger involved three different animation companies with three different styles of and approaches to animation. I guess it's good for business because Warner Bros. is helping to keep the H-B and MGM properties alive.

I think Disney bought Marvel in response to Warner Bros. owning DC Comics. DC and Marvel are rivals and so are Warner Bros. and Disney.

some of my fave stuff is japanese
3 Replies
1
Reply Sat 19 Mar, 2011 10:09 am
@djjd62,
Disney characters and Marvel superheroes go together like oil and water.

At least when DC and Warner Bros. did Looney Tunes/DC superhero mash-ups it worked:

NO-heard about these but I never read these.

I can recall seeing these:

I remember seening Plucky Duck as Batduck on Tiny Toons:

I can recall reading some Batduck (Daffy as Batduck) stories in some of the old Looney Tunes comics.

As far as the Disney/Marvel merger, this is just what people were "dreading": 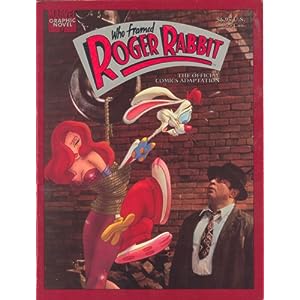 I was a big Roger Rabbit fanboy-but I never read any of these comics. 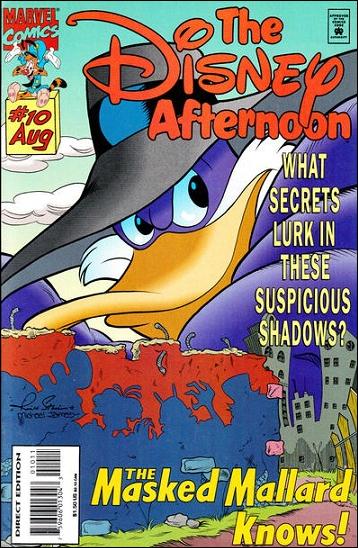 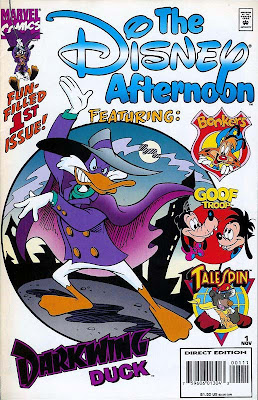 I just saw this:

Here's a link to info on all the Roger Rabbit-based comics:

Gladstone Comics had a series of Ducktales comics in the '80s:

I am wondering if Gladstone:

had any correlation with Marvel?

In 1986, Ted Turner's cable-TV conglomerate acquired most of the pre-May 1986 MGM film and television library[1] (which also included Gilligan's Island and its animated spin-offs, the U.S. rights to a majority of the RKO Radio Pictures library, and the a.a.p. catalog which includes the pre-1950 Warner Bros. film library, the Harman and Ising Merrie Melodies except Lady, Play Your Mandolin!, the pre-August 1948 color Warner Bros. cartoons, and the Fleischer Studios and Famous Studios Popeye cartoons originally released by Paramount Pictures). In 1988, its cable channel Turner Network Television was launched and had gained an audience with its film library.[2] In 1991, it purchased animation studio Hanna-Barbera Productions and acquired its large library as well as most of the Ruby-Spears library.[3]

The promotional logo the network used from 1991-1992 before it began broadcasting had a cartoon character in a circle outline with the words "CARTOON" above and "NETWORK" below. It was intended to be the first logo, but was cancelled. By October 1, 1992, Cartoon Network was created as an outlet for Turner's considerable library of animation, and the initial programming on the channel consisted exclusively of reruns of classic Warner Bros. cartoons (the pre-August 1948 Looney Tunes and Merrie Melodies), the 1933-1957 Popeye cartoons, MGM cartoons, and Hanna-Barbera cartoons. Up until 2009 when Cartoon Network started showing reality shows and live-action movies, the channel would broadcast cartoons 24 hours per day, 7 days per week. The network's first theme was the Checkerboard theme with bumpers involving the Cartoon Network's first logo, used from 1992. Most of the short cartoons were aired in half-hour or hour-long packages, usually separated by character or studio—Down Wit' Droopy D aired old Droopy Dog shorts, The Tom and Jerry Show presented the classic cat-and-mouse team, and Bugs and Daffy Tonight provided classic Looney Tunes shorts. Late Night Black and White showed early black-and-white cartoons (mostly from the Fleischer Studios and Walter Lantz cartoons from 1930s), and ToonHeads, which would show three shorts with a similar theme and provide trivia about the cartoons. There was also an afternoon cartoon block called High Noon Toons which was hosted by cowboy hand puppets (an example of the simplicity and imagination the network had in the early years). The majority of the classic animation that was shown on Cartoon Network no longer airs on a regular basis, with the exception of Tom and Jerry and, as of March 14th 2011, Looney Tunes.