Forums: Art, Painting, Sculpture, Least Favorite Art, Least Favorite
Email this Topic • Print this Page
3
Reply Sun 20 Feb, 2011 06:36 pm
Koons' lawyers are suing people for copyright infringement for making things like bookends that look somewhat like his balloon animals. Which is pretty stupid considering he appropriated those balloon animals from people who've been making them for decades.
1 Reply
1
Reply Sun 20 Feb, 2011 06:50 pm
@MontereyJack,
Yeh, appropriation is a tricky matter to discuss. A presently famous artist whose name I would need to double check used appropriation that really bothered me at the time I read about it. Not sure what I'd think now, will have to reread, but that did come to mind yesterday when I was trying to figure what I actually hated. It might have been a NYTimes article on the whole subject of appropriation. Or, a New Yorker article. Too bad my mind is a sieve.
0 Replies
1
Reply Sun 20 Feb, 2011 07:12 pm
You're probably thinking of the graffiti artist who did the poster of Obama, who was busted in Boston when he came here for graffiti. I saw him at the ICA here and saw him talk but I'm still senior-momenting on his name. Sheesh.
1 Reply
2
Reply Sun 20 Feb, 2011 07:13 pm
Shepard Fairey--it's terrible when you get to the point where Google has to substitute for your memory.
0 Replies
1
Reply Sun 20 Feb, 2011 07:31 pm
@MontereyJack,
No, it's a name like Richard Price or Richard Prince.

Which oeuvre of work from a famous visual arts artist (dead or living) do you just don't understand why they are so famous or loved?

Which brings me to the part I don't understand, as opposed to hate or dislike ...

Postmodernism is a movement away from the viewpoint of modernism. More specifically it is a tendency in contemporary culture characterized by the problematization of objective truth and inherent suspicion towards global cultural narrative or meta-narrative. It involves the belief that many, if not all, apparent realities are only social constructs, as they are subject to change inherent to time and place. ....<cont>

Apparently Banksy (whose work I do like) is a postmodernist, but I would have called him a graffiti artist ... this is so bewildering! 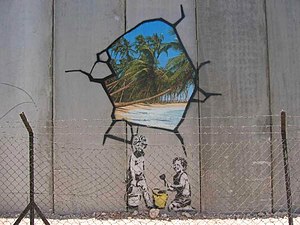 Any assistance in furthering my understanding (in simple language, please) would be most appreciated.

I am getting left behind!

Now there is Post-postmodernism.

Help!
1 Reply
2
Reply Mon 21 Feb, 2011 09:22 pm
@msolga,
MsOlga... these labels are relatively useless on an individual level. Artists like films can have more then one label.

MsOlga... these labels are relatively useless on an individual level

Well "postmodernism" seems that way to me.
Sort of ungrasp-able.

But tell that to art critics & "experts".
Tell that to people who are trying to keep up with developments in contemporary art ... (which try to do, not very successfully these days I'm afraid.)

If only it was as clear cut as understanding film genres.

It is ignorance which is holding us back from a true appreciation.

There was another infamous story of a janitor who threw away what he thought was trash but it turned out to be an actual work of Damien Hirst being exhibited by the museum.

I really love a lot of Damien Hirst's works but alleged art such as this really creates a disconnect between mainstream world and the art world.
http://www.guardian.co.uk/uk/2001/oct/19/arts.highereducation1

I don't know which is more frustrating or worse: The artist of this kind of literal trash art who is sincerely convinced this is an authentic work of art which holds true cultural value and significance for the world or the artist who knows that this literal trash art is nothing but trash but brings it into the world in order to find gullible dupes who will think this alleged artwork holds any cultural value and significance for the world?