Forums: Halloween
Email this Topic • Print this Page
Reply Fri 24 Sep, 2010 10:00 am
Yeah, I have to start thinking of a costume now because I only have next week to get it ready. The party is the day after we get back from the UK. I prefer pun kinda costumes, like cereal killer, so would appreciate any ideas. Or I could dress up as someone... I can't be Cher since I'm only 5'2", but I dunno, this wedding stuff has completely overtaken my brain and I'm coming up with no ideas.

I like to put together the costume myself rather than buy it. And I don't want to be an animal or cartoon - I'd rather it was clever.

Thanks!
Type: Discussion • Score: 14 • Views: 6,354 • Replies: 32
No top replies
1
Reply Fri 24 Sep, 2010 10:07 am
@Mame,
My kid's gonna be "poison ivy" this year. We started with the idea of a ragweed flower fairy (all raggedy looking, holding kleenex) and that moved on to the idea of a poison ivy flower fairy, but that's a little complicated so we're just calling it poison ivy.

Idea is to look kind of menacing and delinquent.

After we'd figured this stuff out, I found out that "Poison Ivy" is a character in the Batman series, played by Uma Thurman in movies and everything, who knew. (Obviously my finger is not on the pulse of pop culture.) So that might be confusing but whatever. She won't have the red hair and will be more black than green.

(Give you any ideas?)
0 Replies
1
Reply Fri 24 Sep, 2010 10:17 am
@Mame,
Since you are going to be traveling, what about an American tourist: Large straw hat, bright loud dress, flats, big sun hat, straw bag. Don't forget to have a camera, and maps hanging out, and that look of being lost. use a tourist bag, like you get from travel agents, and use the straw bag for treats. Dumb broad! BBB
0 Replies
1
Reply Fri 24 Sep, 2010 11:34 am
Drewdad, I was on that site... nothing really appealed to me. Soz, that's not really what I had in mind, either, but I appreciate your suggestion. BBB, I think the American Tourist (ie Tacky tourist) has been done to death (and is 20 yrs old), but thank you.

Can you give more of an idea of what you're looking for? For example: For instance, you could do a version of Princes Laya

or a gangster's moll (just back from the mall)

or a Makin' Whoopie cushion

You could loaf around as a loaf of Wonder Bread

let's see - I've been part of a laundry day team - then there was 'bird in a tree' (that won really good prizes) - a set of drapes (based on the Carol Burnett skit) - 'the man at the arena' - a cigar - part of a McKenzie brothers duo ... I didn't do the dress underneath. Just matching tights and booties. The tassel on the head and as a waist tie ( I had extra curtain tie-backs that I used as ankle bows) - they just made it a riotous costume - and you get used to moving around with a little curtain rod across your shoulders

(I'm the curling arena guy at the front - that paid off in $100 in gift certificates - scared all the girls in accounting since I'd siddle up to them and just grunt - the chest hair was some clip-on hair from the $ store, I had on Set's jeans and t-shirt - a pillow under the t-shirt, the jeans folded up from ankle to my knees)
0 Replies
1
Reply Fri 24 Sep, 2010 02:06 pm
@Mame,
Mame wrote:

Yeah, I have to start thinking of a costume now because I only have next week to get it ready. The party is the day after we get back from the UK. I prefer pun kinda costumes, like cereal killer, so would appreciate any ideas. Or I could dress up as someone... I can't be Cher since I'm only 5'2",

Well, the first one that comes to mind is a collage I made in beginning design - I forget the assignment exactly, but let's say it was to express a concept in collage -
and I took Brillat-Savarin's "man is what he eats"....


present day link - http://www.phrases.org.uk/meanings/you%20are%20what%20you%20eat.html
"This phrase has come to us via quite a tortuous route. Anthelme Brillat-Savarin wrote, in Physiologie du Gout, ou Meditations de Gastronomie Transcendante, 1826:
"Dis-moi ce que tu manges, je te dirai ce que tu es." [Tell me what you eat and I will tell you what you are].

In an essay entitled Concerning Spiritualism and Materialism, 1863/4, Ludwig Andreas Feuerbach wrote:
"Der Mensch ist, was er ißt."
That translates into English as 'man is what he eats'.

Neither Brillat-Savarin or Feuerbach meant their quotations to be taken literally. They were stating that that the food one eats has a bearing on what one's state of mind and health.

The actual phrase didn't emerge in English until some time later. In the 1920s and 30s, the nutritionist Victor Lindlahr, who was a strong believer in the idea that food controls health, developed the Catabolic Diet. That view gained some adherents at the time and the earliest known printed example is from an advert for beef in a 1923 edition of the Bridgeport Telegraph, for 'United Meet [sic] Markets':
"Ninety per cent of the diseases known to man are caused by cheap foodstuffs. You are what you eat."
end/clip

and used a big magazine ad for pork and beans, that was mostly beans, and maybe some pork and beans can wrap lettering and used some fancy font for the other lettering..

The teacher found it a little crude and gave me an a+. Hah, my first concept art, to explain, one was "full of beans".

Not that I recommend this for halloween, but playing with either food dicta or some famous quotes on whatever subject could be a possibility. Maybe song lyrics.. 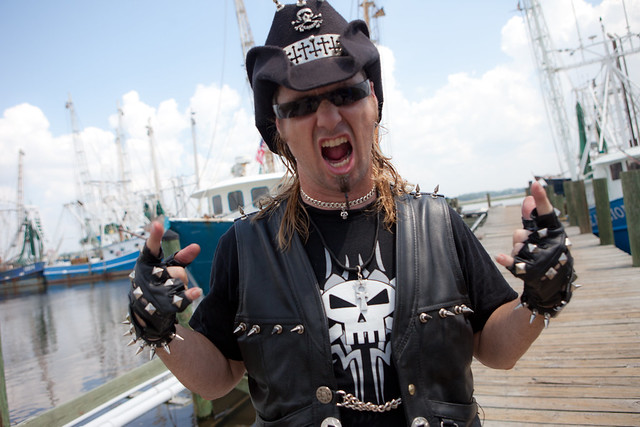 I had some friends go as a bricklayer (him) and a brick (her) once. It was easy and pretty darn funny.

Ghostbusters are always good -- you really just need a flight suit and some iron on patches.
0 Replies