Forums: Atheism, Atheists, Religion, Reality, Without Belief
Email this Topic • Print this Page
4
Sat 9 Apr, 2022 07:41 am
@Frank Apisa,
The word salad is one thing, as is the crackpot conspiracy theorising, none of those are that offensive.

The bigotry is off the scale, there doesn't seem to be any group outside of their own circle that they don't despise.

I don't know of any change because, other than the odd opening sentence, I stopped reading their posts shortly after they first arrived here.

It's easy to dismiss me as using word salad, because to some extent, my ADHD does affect the organization of paragraphs. Or "bigotry". Yeah, show me one thing I've said that's bigoted. I'll need the quote link for actual context, not a copypaste quote or hearsay about something you think you remember me saying. And no, being a Trump voter doesn't make you a bigot by default. A bigot says things like "Black people can't be trusted to vote correctly without our help (liberals everywhere say this"

But certain points remain. All of you are sex abuse enablers unless you prove otherwise and condemn this man. You can't do that, can you? No, no, you love him. You love what he's done to the country and its people.

I'd love to be tied to a chair and forced to watch my nephews and niece be raped, and have you offer platitudes about how I'm just making things up or talking too much, while the rapist has his way. Whenever I'm untied, I'd be more disgusted at all of you than the rapist. Arrest and punishment for the rapist would be enough to satisfy me for the rapist (even though yes he violated my own family, you guys are worse scumbags with your casual acceptance of things), but nothing on this Earth would make me feel better about you guys.
1 Reply
-2
Sat 9 Apr, 2022 07:55 am
@bulmabriefs144,
Quote:

They're programmed to not see it.

However, if you superimpose trump's image over joe's, they'd be the first out of the gate declaring that he must be a pedophile. And then they'd claim that we're the sick ones because we approve of, and defend, that kind of behavior. They have interesting thought processes.
1 Reply
-3
Sat 9 Apr, 2022 08:00 am
@Glennn,
Hey let's do that. You got a photoshop? See how quickly they turn on the president when we show the same pictures but with Trump's face, wearing his tie and stuff, but doing the sniffing and groping.

Or better yet, we need a deprogrammer. One of those guys that breaks up cults. Cuz I suck at it, even though I've successfully run away from the Morning Star Farm. The Twelve Tribes are a menace.
https://www.msrfarm.com/

Dude, I remember one of these guys from the Who We Are picture. Great, now I have cult trauma too.

But yes, putting trumps head on joe when he loses control around little girls would maybe cause them to see things from the proper perspective with the proper priorities in mind.
2 Replies
5
Sat 9 Apr, 2022 08:17 am
@Glennn,
Quote: 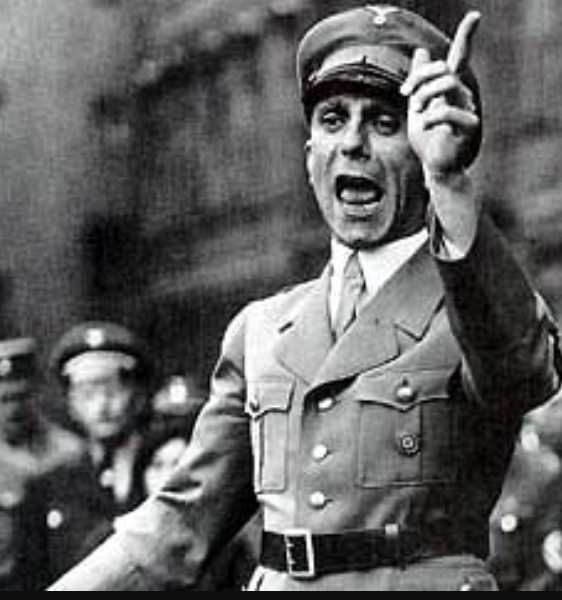 I like deprogramming people, especially when that's not what they want.

2 Replies
-3
Sat 9 Apr, 2022 08:29 am
@Walter Hinteler,
You misunderstand me. I like to deprogram people who believe that joe epitomizes normal around little girls. Sounds like a breeze, I know. But you'd be surprised at the extent to which people are subject to party-president . . . enthusiasm. Little girls be damned.
0 Replies
6
Sat 9 Apr, 2022 08:39 am
@Glennn,
Maybe putting Joe's head on this: 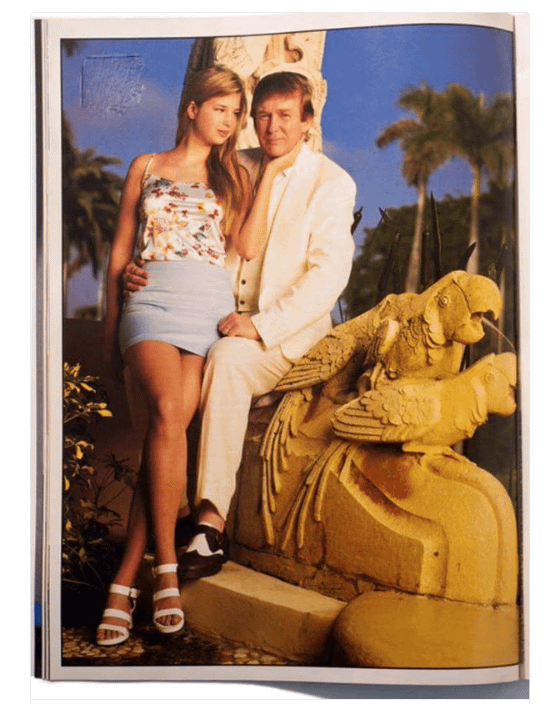 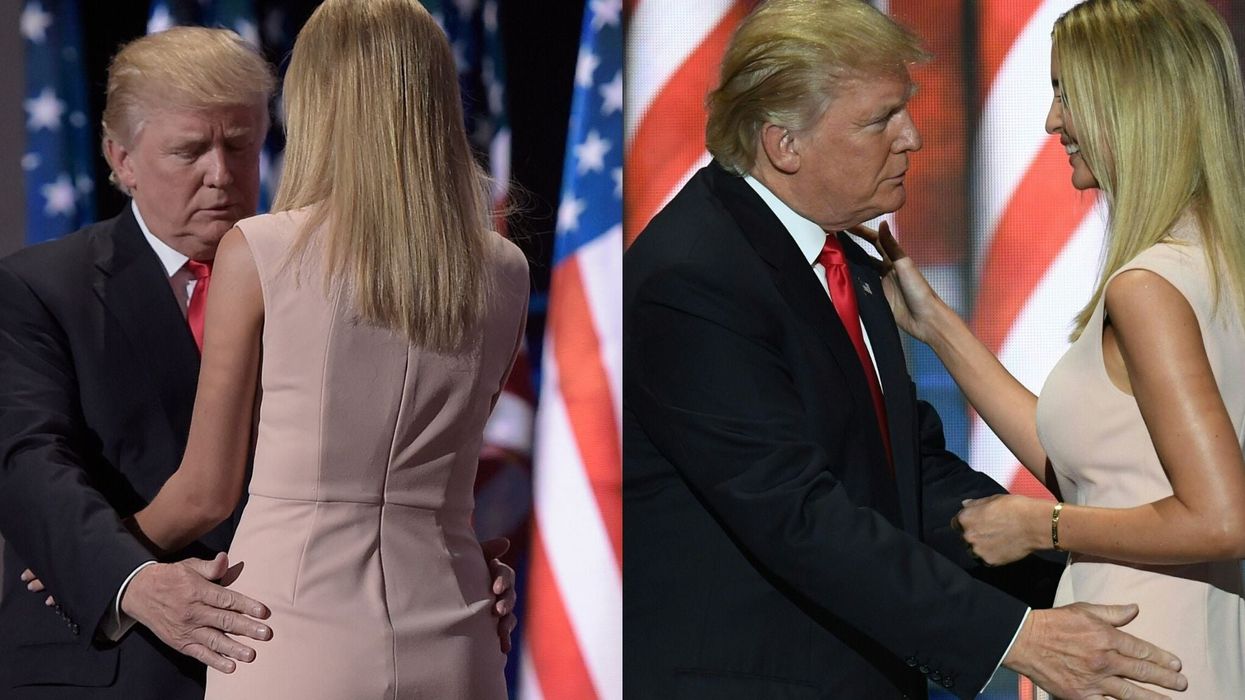 When Ivanka was just 16 years old, she hosted the Miss Teen USA pageant and Donald Trump reportedly made the comment in front of the crowd.

"You know who's one of the great beauties of the world, according to everybody? And I helped create her? Ivanka. My daughter, Ivanka. She's six feet tall. She's got the best body."

Yet again on The Howard Stern Show, this time in 2006, Trump thought it appropriate to discuss his daughter's body, mentioning how "voluptuous" she is, followed by:

7. ‘I’ve said that if Ivanka weren’t my daughter, perhaps I’d be dating her.’

Could you be any lower than you are?

Yes, the incest thing possibly going on with Trump's own family is soooo much more creepy. These pictures are hilarious btw. I'm not sorry.
1 Reply
4
Sat 9 Apr, 2022 04:55 pm
@bulmabriefs144,
Funny how the Orange Shitgibbon adds an aura of creepiness and deviency to any situation, isn't it?
1 Reply
-4
Sat 9 Apr, 2022 07:36 pm
@bobsal u1553115,
Actually, it was hilarious how fake my editing looked. His head is really big in some of these shots.

(It had to be, to cover over Biden's nose)

More importantly, it's time to talk about another matter.

You see, atheist wokeists are a bit like politicians themselves with the negative ads. "The other candidate did this terrible thing, and that's why you should vote for me." They talk a good game about how religion is the cause of trouble, how Christians or Jews or Buddhists (or whatever targets they can safely talk about without being attacked) do this or that, and that's bad.

But like negative politicians, they often can't tell people why they should vote for them. Why should the world be atheist? We've seen a number of despots like Lenin and Stalin who largely banned religion. What can you offer that religion can't? After all, religion gives the concept of afterlife. True or not, this is a powerful motivator.

Ah... you do get the contradiction there?

Now, if you click on it where it says (View), you can see what they posted, and decide whether to continue to ignore what they said or respond to it.

I know! It's an amazing feature!

After all, religion gives the concept of afterlife.

Not a very convincing one.

The constitutional integrity of the conscious mind, as a system, is interdependent on the holarchic, physical structure that constitutes the human body. If the conscious mind is located at the apex of this holarchic structure, then the collapse of the subsystem structure beneath it, from which it has emerged, has terminal consequences. The conscious mind becomes just another impermanent system subject to physical laws. It does not survive death, because it cannot exist outside of the holarchic structure from which it emerged and receives its contextual relevance.

Why There Is No Afterlife: A Systems Perspective
3 Replies
2
Sun 10 Apr, 2022 05:26 am
@hightor,
There is the possibility that we are all just subroutines or algorithms running in the mind of God.

I’d be ok with that.