THE MAGIC BUS COMES TO CANADA

Forums: Atheism, Religion, Canada
Email this Topic • Print this Page
Reply Mon 2 Feb, 2009 11:51 am
Perhaps members will recall the story of a humanist ad campaign in England to put ads on the sides of buses with the message that there probably is no god.

TORONTO, Jan. 16 (UPI) -- A Toronto association of atheists is conducting a fundraising campaign to post ads on city public transit vehicles to advise "there is probably no God."

Chris Hammond, 22, a first-year political science student, launched the atheistbus.ca Web site this week with a goal of collecting $6,000 to run the ads on Toronto Transit Commission buses, street cars and subways, the Globe and Mail reported.

The message reads: "There is probably no God. Now stop worrying and enjoy your life," the report said.

"There's atheists that are out there. This will show them they are not alone," Hammond told the newspaper.

The move follows a similar British campaign spearheaded by journalist and comedy writer Ariane Sherine who raised $210,000 for a London transit ad blitz, the report said.

Rev. David Giuliano, moderator of the United Church of Canada, told the Globe he didn't have any issues with the atheists' message, although he would rather they say what they believe in, rather than what they are against.

"I think most of these ads ... are responding to a version of God and Christianity that is grounded in a kind of judgment and fear and guilt," Giuliano said. "I don't believe in that God either."

A Toronto-based group that's promoting atheism says Calgary is the next Canadian city on its radar.

The Freethought Association of Canada wants to put ads that question the existence of God on the side of Calgary city buses, said president Justin Trottier.

The ads would carry a simple message: There's probably no God. Now stop worrying and enjoy your life.

"We're not trying to insinuate that anyone's belief system is faulty. We're just trying to make the case for ours being just as acceptable," Trottier told CBC News.

The group is currently waiting for approval to put its ads on buses in Toronto. Similar campaigns have been launched in London, England, Madrid and Washington, D.C.

Trottier said the group chose Calgary as its second Canadian target because it has received a lot of support from city residents. It hopes to launch the Calgary campaign in March.

The goal of the ad campaign is to promote dialogue among different faiths, as well as gain greater recognition for atheism, Trottier said.

(The preceding two articles, from United Press International and the CBC, are reproduced in their entirety, so no links were posted.)

The following article, from a Christian-oriented web site, describes the original campaign in England, and similar attempts in Italy (failed) and Spain (succeeded), as well as the planned Toronto campaign:

January 20, 2009 (LifeSiteNews.com) - A bus ad campaign started in Britain earlier this month has caused a furor in several European countries and may be spreading to Canada.

In Britain, comedy writer Ariane Sherine came up with the idea to have the slogan "There's probably no God. Now stop worrying and enjoy your life" placed on the sides of buses, and quickly gained support from the British Humanist Association and atheist campaigner Richard Dawkins.

Recently a Christian bus driver from Southampton refused to drive a bus that displayed the ad, saying he was shocked and horrified when he saw the slogan, and walked out of his shift in protest.

"I was just about to board and there it was staring me in the face, my first reaction was shock, horror," driver Ron Heather told BBC radio.

"I felt that I could not drive that bus. I think it was the starkness of this advert which implied there was no God. I told my managers and they said they haven't got another one and I thought I better go home, so I did," he said.

An AFP report said that following the appearance of the ads on 800 buses across Britain and in London's subway system, "angry Christians have protested to Britain's advertising watchdog - the Advertising Standards Agency - asking for proof that the slogans are telling the truth."

A Daily Telegraph report said that the Advertising Standards Agency is considering whether to investigate the campaign on the grounds that it is offensive or that its central claim about God's existence cannot be substantiated.

In northern Italy, a more blatantly antagonistic slogan - "The bad news is that God does not exist. The good news is that we do not need him." - has been rejected by a billboard agency, the IGP Decaux advertising group. The ad campaign was condemned by the Roman Catholic archdiocese of Genoa, whose Archbishop Angelo Bagnasco is president of the Italian Bishops Conference.

Spain, on the other hand, has had the ads appearing on buses in Barcelona and Madrid since last Monday. Though condemned by the Catholic Church in the country, no other apparent protest is being reported in the media.

Madrid's La Gaceta said that despite “so much publicity and so much ink spilled in the media,” most Spaniards were indifferent to the ads.

“Yesterday,” the report said, “residents in Barcelona generally showed indifference to the campaign, even though every newspaper, radio and television station, both in Catalonia and in Madrid, covered it in recent days.”

The Freethought Association of Canada is planning to extend the atheist ad campaign to Toronto where it intends to buy ad space on buses from the Toronto Transit Commission (TTC).

The group's website indicates that the ad in its British format has been submitted for approval to CBS Outdoor, the firm that handles advertising for the Toronto Transit Commission, with atheist groups in Montreal, Calgary and Vancouver watching the outcome in order to follow suit if the Toronto campaign is successful. I was interested to note that the reactions of church leaders in Canada were rather restrained or bemused. No one seemed to get terribly upset. In Italy, a bishop protested and the campaign was shut down. In Spain the church objected, and they were ignored.
1 Reply
1
Reply Mon 2 Feb, 2009 01:24 pm
@Setanta,
i don't really care one way or another as the offspring campaigns are just that and self-promotion is probably at least as important as the message itself. The guy that was saying that he doesn't believe in the God of fear and guilt either has a valid point, though. "There is probably no God" may sound harmless and be well intentioned, but it can also be pretty demeaning to a good number of decent folks.

Either way, I don't have a great deal of sympathy for this campaign, but I also don't have much against it.
1 Reply
1
Reply Mon 2 Feb, 2009 01:36 pm
I don't have sympathy with it because such things turn atheism into a religion itself, with an apparent attempt to get a message across and an attempt to get people to disbelieve as the messengers say they do. To me, being atheist is also being areligious, and i find proselytizing to be incompatible with that.

However, humanists and atheists whom i have heard interviewed make a good point that they are surrounded with religious messages, about which no such fuss is made, and that they simply want to get their message across once, as society is saturated with the other message. I heard an interview of the woman in England who wrote the original campaign (her father is Christian and her mother is Parsi), and an interview of the young man who has started the campaign in Canada, as well as a lot of callers pro and con.

I find it sad that atheists feel a need to get such a point across, because, as i say, it makes them little different from theistic religionists. But i'd no more want to say they shouldn't do that than i'd want to see society with an established religion. It has become almost axiomatic in such slang-fests that religionists equate atheists with a competing belief set, which ain't so from my point of view, and this sort of thing just tends to confirm irascible and militant religionists in such a point of view.
1 Reply
1
Reply Mon 2 Feb, 2009 01:43 pm
@Setanta,
likewise. that's why i think the guy had a point. ..that he also doesn't believe in what they don't believe in... yaknow. anyway, the more eloquent way to put it is that yes, it elevates, nay, dismisses atheism as just another belief.

never liked eye for an eye approach myself. in my opinion it more often than not does disservice to the cause... but if they raise money, they can plaster whatever they please on buses. i have my brain, i will read and form an opinion. no need to get riled up about ANY signs on buses (well, i would stop at neo-Nazi signs or such)
0 Replies
1
Reply Mon 2 Feb, 2009 03:01 pm
@dagmaraka,
dagmaraka wrote:

"There is probably no God" may sound harmless and be well intentioned, but it can also be pretty demeaning to a good number of decent folks.

But no more so than saying the opposite might be to another bunch of decent folks, right?

However, I think the admonition:
Now stop worrying and enjoy your life.
is equally good advice for both camps.
1 Reply
2
Reply Mon 2 Feb, 2009 03:33 pm
Seems like the religious right believes in free speech only until someone actually speaks freely.
0 Replies
2
Reply Mon 2 Feb, 2009 03:45 pm
@George,
of course it's not demeaning from where you sit, george. neither from where i sit.

of course it's not demeaning from where you sit, george. neither from where i sit.

mind you, i was born a heathen and will die a heathen. don't mean i have to like this, eh.


When John Updike died, PBS showed a recent interview with him. According to Updike: "True, Christianity will not solve all of your problems, but neither will atheism."

Ah, now I see your point. Yeah, that can come off as patronizing. 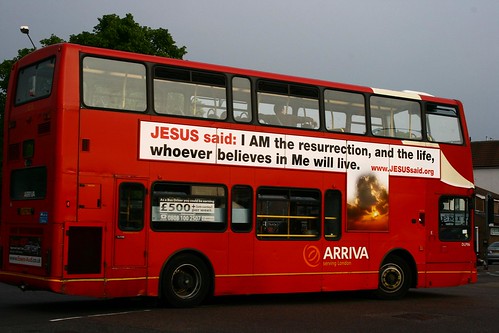