I bought my dog for $50. The previous owner claimed she was pure Pitbull.

http://www.bulldogbreeds.com/americanpitbullterrier.html
Pit bulls are mutts. There is no genetic test because they aren't a real breed. What were you expecting for $50. Just make sure to love the dog and socialize it well, otherwise they are fearsome beasts.
1 Reply
2
Reply Sun 22 Nov, 2009 03:14 pm
@dlofosho,
You can get a DNA test on the dog and they can identify the breeds.
http://www.canineheritage.com/
1 Reply
2
Reply Sun 22 Nov, 2009 04:41 pm
@tsarstepan,
Maybe the can identify the constituant bits and pieces, but it could cost more than the $50.00 price of the dog. I admit I didn't check the site, may be less. Like Ceili says it's not a distinct breed, so I don't think you would learning anything useful. And what if you did? The guy's still got the dog. Most of us won't shoot a mutt for being a mutt.
1 Reply
2
Reply Sun 22 Nov, 2009 04:48 pm
@roger,
I love mutts far more then pure breeds. They're far more beautiful and tend to be healthier, (less genetic freakish diseases passed in their lineage) then their pure bred cousins. 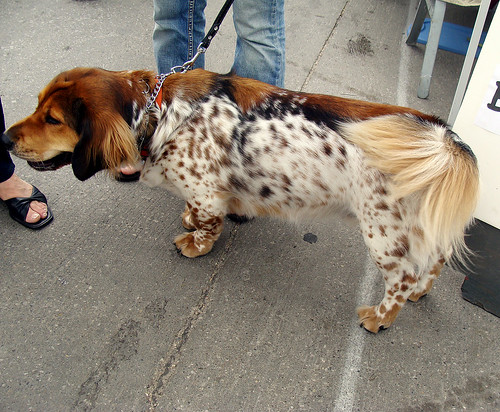 "Hiyah doin" th dog said to me
I kind of blinked when I heard that;
"This is amazing" I said
"whered you learn to talk ?"
The dog says , WEll, Im kind of old but I was in training with the Cia and they taught me at Langley in the FBI species labs"

"wow" amazing I said and you speak so clearly"
"Yeh, they had me report by direct phone and I was sent all over. I was originally statione din Berlin just before Communism crashed there and then they sent me to Panama to spy on old Pinapple Face, Then when That assignment was over I was sent to Colombia to spy on Pablo Escabar"

So I asked the guy what he wanted for the dog
Ill take 10 bucks for him
"TEN BUCKS? for that dog. Jeez that price seems really cheap How Come only 10 bucks?"

You even see signs at vets with a picture informing you that they are both dangerous and illegal to own here.

When I ask my vet why he had such nonsense on his wall I was told that the county require him to post it.

0 Replies
1
Reply Mon 23 Nov, 2009 04:48 am
@tsarstepan,
Thats why Im afraid for the Border Collie. Its never been a conformation breed and was never recognized by the AKC. Recently, however, the AKC has recognized this as a breed and unscrupulous breeders and "puppy mills" are breeding for conformance and not brains.

We could be losing the genius that this breed is famous for. The border Collie is one step away from a wild hunting dog in brainpower.
2 Replies
1
Reply Mon 23 Nov, 2009 06:10 am
@farmerman,
I thought that is was a case of the owners not allowing AKC to register the breed, and just for the reasons you mention.
1 Reply
1
Reply Mon 23 Nov, 2009 01:25 pm
@roger,
six of one--Youre actually right but I prefer not to look like a snob. The STockdog association has always recognized multi morphed breeds like shelties, catahoulas, border collies, and aussie stockers. Youll hardly ever find 2 dogs the same freom the same litter.

When my babu Stash had puppies, she looked at me like I thought she was some tramp ,what with so mant differences in her puppies-- long hairs and brown hairs,short ears ,apple heads and crackled eyes.
1 Reply
1
Reply Mon 23 Nov, 2009 06:48 pm
@farmerman,
actually, the Border Collie has been an AKC breed since March, 2004. Just fyi.
http://www.akc.org/breeds/border_collie/index.cfm
The BC's do very well in performance events, i.e. obedience, agility ....
0 Replies
1
Reply Mon 23 Nov, 2009 07:31 pm
@farmerman,
What the heck are crackled eyes?!
1 Reply
1
Reply Mon 23 Nov, 2009 08:01 pm
@tsarstepan,
He is probably referring to marble like eyes. Part one colour and part another.
0 Replies
1
Reply Tue 24 Nov, 2009 07:21 am
@dlofosho,
There are tests out there. They will not identitfy a Pit Bull. Lik everyone says, love your dog no matter what. Consider it a one-of-a-kind. If you "buy" a dog you get what you get. It sounds like it was purchased online or from an otherwise unreliable source. People should consider going to rescues and shelters. There are lots of Pit Bulls and otherwise lovely dogs looking for homes and at least you know where you are getting it from. People who "sell" their dogs for $50 may not be the most stand-up people out there.
0 Replies