would you rather her friends be heterosexual girls who were sleeping with every boy in town, or nuns, or asexual

You "deal" with it by letting her live her life, by being there for her, by respecting her choices.


Is there even a problem with this, to be dealt with? I'm afraid I don't understand.

Or are you assuming they are lesbians because they are big athletic type girls? Is so, are they really lesbians or just toy boys?
1 Reply
1
Reply Tue 18 Aug, 2009 01:04 pm
@Linkat,
Linkat wrote:

Or are you assuming they are lesbians because they are big athletic type girls? Is so, are they really lesbians or just toy boys? 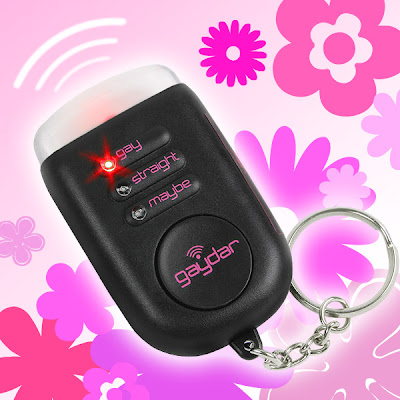 Point it at your daughter's friends and find out if it "pings."

You may have to calibrate it first by pointing it at somebody who you know is definitely gay. I suggest your local evangelical preacher or Republican congressman.
2 Replies
1
Reply Tue 18 Aug, 2009 01:10 pm
@djjd62,
Yes - I think this is what you call a freudian typo - always wanted my own boy toy.
0 Replies
2
Reply Tue 18 Aug, 2009 01:19 pm
@katsue56,
At least you won't have to deal with any unplanned pregnancies.
Not to make light of it - I guess if my daughter had all female friends who were lesbian, I might have to wonder if she weren't lesbian herself. Not that I'd get upset or anything, but yeah, I think you'd proceed a little differently if you knew your child might be dealing with the issues that being a gay teen brings as opposed to those being a heterosexual teen brings.
It's not productive to pretend that you're child being gay and your child not being gay call for the same sort of interactions and responses as a parent.

My roommate my senior year in college was a lesbian and that about drove my mom to distraction. I didn't tell her- I didn't have the chance to - C & C (my roommate and her girlfriend) gave me a ride home from college one Christmas and spent the night at my house and my mother didn't even have one of those little devices Joe just posted - but she knew- she said, 'Those girls are more than just friends.'
I didn't lie to her- I said, 'Yes, they're lesbians' and my mother was like, 'Rebecca Jean - you have to get a new roommate!' I don't think she ever thought I was gay, but I know she thought that everyone else would think I was gay. I told her not to worry about it and was roommates with C. and (essentially C- she slept over almost every night) until I graduated.
Years later, several people did tell me they thought I was gay because I lived with these gay women and seemed to like them- but it never stopped anyone from being my friend (that I know of).
1 Reply
1
Reply Tue 18 Aug, 2009 01:22 pm
@aidan,
If it helps I was once called a lipstick lesbian (although I wasn't a lesbian).
1 Reply
1
Reply Tue 18 Aug, 2009 01:24 pm
@Linkat,
Yeah - that's what they thought I was too - I wasn't butch at all but I lived with this lesbian -but I had a boyfriend... they couldn't really figure it out (they told me later).
I just laughed.
1 Reply
1
Reply Tue 18 Aug, 2009 01:35 pm
@aidan,
Maybe your boyfriend was hoping too...
1 Reply
1
Reply Tue 18 Aug, 2009 03:03 pm
@Linkat,
Yeah well that was funny too. They hated him coming to the room because they said he brought 'hostile male energy' into their space - but he loved coming to the room because they'd be giving each other massages topless and all.

He used to get peeved at me because I wouldn't spill any of the good stuff , but I honestly didn't know what went on over in that other bed - the light would go off and I'd pull the covers over my head and go to sleep. I've never been much of a voyeur (or a lesbian- or even bi) much to his chagrin.
0 Replies
1
Reply Tue 18 Aug, 2009 04:07 pm
@Cycloptichorn,
Quote:

Is there even a problem with this, to be dealt with? I'm afraid I don't understand.

What Cycloptichorn said. I don't see what the problem is.
1 Reply
1
Reply Tue 18 Aug, 2009 08:11 pm
@Froth,
Are you really asking if you should be upset because your 15 year old daughter is hanging with kids that are sexually active?

I may be the lone wolf here, but I'd be concerned.

Get one of these gadgets:

Point it at your daughter's friends and find out if it "pings."

You may have to calibrate it first by pointing it at somebody who you know is definitely gay. I suggest your local evangelical preacher or Republican congressman.

I would just make sure that the lines of communication are open with your daughter so that she feels comfortable confiding in you. I know someone in her 40's who still can't tell her Mom she's a lesbian even though everyone knows it, including her Mom. So just make sure your daughter understands that you love and support her in all things she does.

Are you saying they're sexually active or at least actively dating since you're describing them as lesbians? If that's the case, I would enforce some rules with your daughter because gay or straight, she's too young to get wrapped up in all that stuff. She needs to focus on school and her future right now so I'd make sure she doesn't get off track. Ask her what her dream job is and then help her come up with a plan to achieve it. Listen closely to what she says about her goals and try to show more support for those things so that her energies are directed there.
0 Replies