Too good for Americans to have... 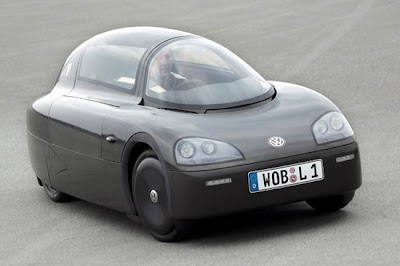 I wouldn't think a heater would be a problem...I mean it still has an engine that would provide the heat.
0 Replies
2
Reply Mon 6 Jul, 2009 06:48 pm
@gungasnake,
Quoted from Gunga's source.

$31,000.oo seems a bit steep for a single seater. Probably a great design from VW, but I couldn't make it work except as a second car, and second cars are not part of my budget.
1 Reply
1
Reply Mon 6 Jul, 2009 10:18 pm
@roger,
If you figure the thing is produced and sold in China, nothing remotely resembling our crash or emission standards, a simple engine no more than around 200cc and probably supplying electricity to a single electric motor connected to one axle, then I could picture it selling for under 1000 USD but just barely.
1 Reply
1
Reply Mon 6 Jul, 2009 10:23 pm
@gungasnake,
Unless VW is marketing it at a loss, it will be much more than $1000 retail.

What is supposed to be so smart about them?

According to their website it gets 33 city 41 highway, costs 11 to 20K and has obvious storage issues if you plan to bring home more than 3 or 4 bags of groceries.

My corolla gets 35mpg with my combo of city and highway driving, it cost 16 to 17K and has enough storage capacity for most needs.

Plus, it's not butt ugly.

At the 42nd Annual Meeting of Stockholders of Volkswagen AG in Hamburg, the most economical car in the world is presented: the 1-litre car. The prototype, which until now has been kept closely under wraps, and which many people never believed could be built, was driven under its own power from Wolfsburg to the Annual Meeting in Hamburg. Before the Annual Meeting, the current Chairman of the Board of Management, Dr. Ferdinand Piëch, drove this research vehicle to Hamburg from the company's headquarters at an average fuel consumption of 0.89 litres per 100 kilometres. This has once against impressively demonstrated Volkswagen's position at the cutting edge of modern technology.

The 1-litre car is powered by a one-cylinder diesel engine, centrally positioned in front of the rear axle and combined with an automated direct shift gearbox. The crankcase and cylinder head of the 0.3-litre engine are of an aluminium monobloc construction. The naturally aspirated, direct-injection diesel engine employs advanced high-pressure unit injection technology to generate 6.3 kW (8.5 bhp) at 4,000 rpm. This gives the vehicle, which weights just 290 kg, an astonishingly lively temperament.

Fuel consumption is a mere 0.99 litre per 100 kilometres. With a 6.5-litre tank, this gives a range of some 650 kilometres without refuelling.

- the car originally was devopped in 2001/2, then stopped, then re-developed
- first time the car presented in September 2007,
- built (not in Hamburg but) in VW's experimental factory close to test track facility in Ehra-Lessien (Lower Saxony)
- the price of 35,000 Euros (if/when production starts in 2010*) is thought possible to be reduced to 5,000 Euros from 2012 onwards.

* There's no other serious news known then what was published in 2007.
1 Reply
1
Reply Tue 7 Jul, 2009 07:15 am
@Walter Hinteler,
Any more info on the transmission system??
1 Reply
2
Reply Tue 7 Jul, 2009 08:35 am
@gungasnake,
The one-cylinder diesel engine, centrally positioned in front of the rear axle and combined with an automated direct shift gearbox. The crankcase and cylinder head of the 0.3-litre engine are of an aluminium monobloc construction. The naturally aspirated, direct-injection diesel engine employs advanced high-pressure unit injection technology to generate 6.3 kW (8.5 bhp) at 4,000 rpm.


More >here< (NB: translated from the September 2002 Volkswagen press release)
1 Reply
2
Reply Tue 7 Jul, 2009 08:49 am
@Walter Hinteler,
I just found an article in a local paper from a neighbour town - the head of the Volkswagen projects, professor Gämsicke, was born there.
In a discussion in April 2009 he showed a 'historic" video of the here mentioned car (the drive from Wolfsburg to Hamburg in 2002) and another from the Eco Racer.

That newspaper report gives no hints that he talked about a production of the car. For Germany/Europe, he said quite the opposite: "everyone likes such a garage .... standing in front of neighbour's home". (Source: 'Die Glocke', Gütersloh edition, 27.04.2009)
1 Reply