Forums: Palestine, Israel, Territorial Dispute, Politics, Middle East
Email this Topic • Print this Page
1
Reply Mon 14 Jun, 2021 10:40 pm
@oralloy,
Oh, I know he's an arsehole, and so is his wife, but my opinion doesn't carry any weight, in reality.

Here's hoping the coalition that ousted him, can hang in there long enough to see him convicted and sentenced.
1 Reply
-3
Reply Mon 14 Jun, 2021 11:14 pm
@Builder,
Why do you bear him such ill will?

Usually people have a reason for disliking someone to such an extent that they wish a criminal conviction upon them.
0 Replies
-2
Reply Tue 20 Jul, 2021 06:08 pm
@MontereyJack,
The Book of Jubilees Chapter 8: When Noah divided the Land among his three sons, Shem received the middle portion, from the delta of the river of Egypt, north to Lebanon and east to India, while Ham received the land of Africa to the south, and Japheth received the land to the north of Lebanon, which according to the book of Jubilees 8: 30; It is said that the Land of Japheth included the five great islands and a great land in the north. But it is cold, and the land of Ham is Hot, and the land of Shem (The middle son) is neither hot nor cold, but it is of blended cold and heat.

The sons of Noah then divided their portion of land among their sons, and it is written in Jubilees 9: 14; “And thus the sons of Noah divided unto their sons in the presence of Noah their father, and he bound them all by an oath, imprecating a curse on everyone who sought to seize the portion that had not fallen to him by lot. And they all said, ‘So be it; so be it,’ for themselves and for their sons forever throughout their generations til the day of judgement, etc.”

Then in chapter 10: 29; we read; “And Canaan saw the land of Lebanon to the river Egypt, that it was very good, and he went not into the land of his inheritance to the west (That is to) the sea, and he dwelt in the land of Lebanon, eastward and westward from the border of the Jordan and from the border of the sea. And Ham his father, and Cush and Mizraim, his brothers said unto him: ‘Thou hast settled in a land which is not thine, and which did not fall to us by lot: do not do so; for if thou dost do so, thou and thy sons will fall in the land and be accursed through sedition; for by sedition ye have settled; and by sedition will thy children fall, and thou shalt be rooted out forever, etc.

Only 20 people survived in the Twin Towers explosions. The cleanup of that place had to be extremely long – it finished only in 8 months after the explosions. And even after a decade, only 1,629 corpses were identified, while the total number of the killed was 2,753.

The next morning after the attack, the Palestinians were dancing in the streets rejoicing at the death of 2, 753 Americans, and how many Americans today support the Palestinian position.

The next morning after the attack, the Palestinians were dancing in the streets rejoicing at the death of 2, 753 Americans, and how many Americans today support the Palestinian position.

Israel is a tiny tract of land. I don't go around declaring that Spain or France or Germany or Belgium does not get to exist. But the Muslims essentially have done exactly this, to the country of Persia (now Iran, having totally lost its religion and most of its culture). And tried to do it repeatedly to Israel. 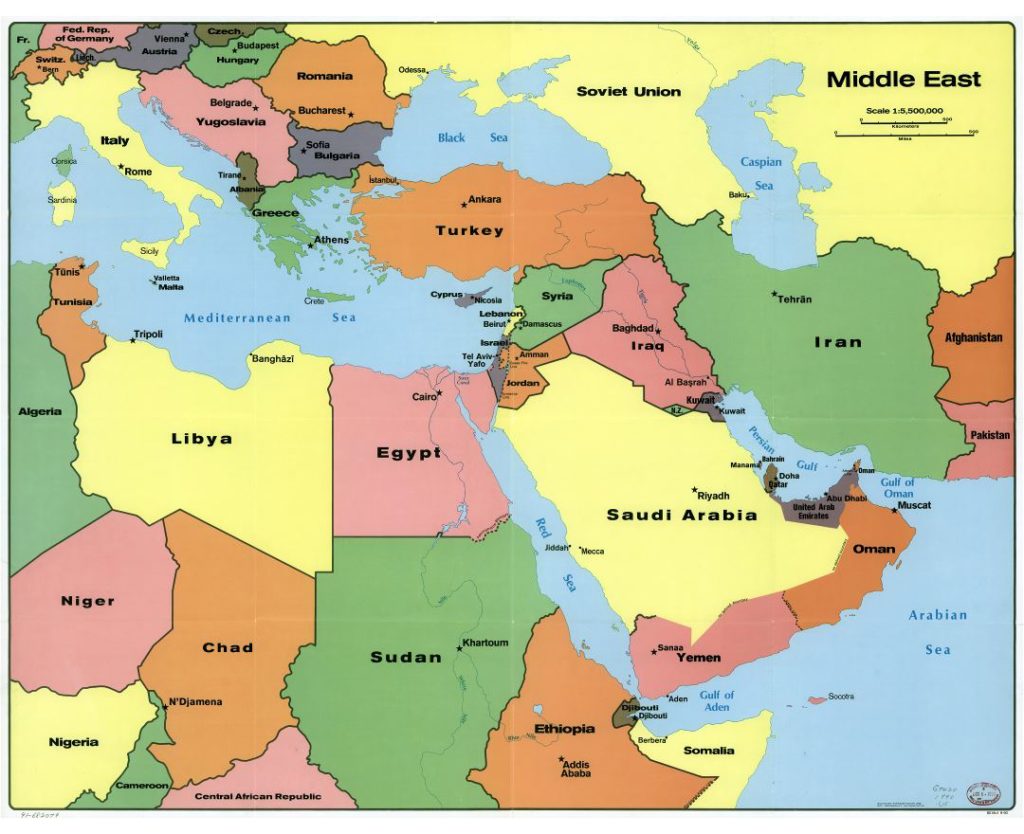 Look at this map that I found in like five minutes. Look at Israel. Look at all these other countries.

See how huge they are? See how tiny Israel is in comparison?

Now can you honestly say that this kind of land appropriation accusation is fair? A tiny chunk to consolidate the borders of its country.

Syria was Christian. So was Egypt (Coptic), and before that pagan. Iran was Zoroastrian. The area near Saudi Arabia was usually pagan (Mesopotamian). Turkey and Ethiopia were also Christian. Now most of these countries are Muslim.

Are you HONESTLY giving Israel a hard time for this? This is sorta a pot calling a kettle black, no?
2 Replies
Below viewing threshold (view)
-5
Reply Sat 9 Oct, 2021 08:07 pm
@bulmabriefs144,
I favor renewing the Crusades and restoring the Byzantine Empire in Turkey and Syria. This should include forcibly converting both nations back to Christianity.
0 Replies
Below viewing threshold (view)
-5
Reply Wed 27 Oct, 2021 07:47 pm
Great news! More settlements!
https://www.bbc.com/news/world-middle-east-59062909
1 Reply
5
Reply Thu 28 Oct, 2021 11:42 am
@oralloy,
Great news only for people who hate peace and equal rights
1 Reply
-4
Reply Thu 28 Oct, 2021 12:18 pm
@MontereyJack,
I favor peace and equal rights, and I too find it to be great news.

Bennett opposes the creation of a Palestinian state: "I will do everything in my power to make sure they never get a state."

He suggests a tripartition of the Palestinian territories, whereby Israel would unilaterally annex Area C, authority over the Gaza Strip would be transferred to Egypt, and Area A and Area B would remain with the Palestinian National Authority, but under the security umbrella of the Israel Defense Forces and Shin Bet to "ensure quiet, suppress Palestinian terrorism, and prevent Hamas from taking over the territory".

Bennett also resists immigration of Palestinian refugees now living outside the West Bank, or the connection between the Hamas-controlled Gaza Strip and the West Bank.
1 Reply
3
Reply Thu 28 Oct, 2021 02:49 pm
@oralloy,
You don.t favor either peace or equal rights when you favor a policy guaranteed to produce neither.
1 Reply
-3
Reply Thu 28 Oct, 2021 03:37 pm
@MontereyJack,
Your refusal to ever make peace with Israel is a policy that is guaranteed to never produce either peace or equal rights.

The reason why Israeli voters keep electing militant rightwing governments to protect them is because they know that you will never offer Israel peace no matter what they do.
0 Replies
4
Reply Thu 28 Oct, 2021 03:45 pm
@bulmabriefs144,
The size of Israel is irrelevant to the fact that the Zionist regime ethnocentrically oppresses the Palestinian people. That oppression is the crux of the conflict in Palestine. Ethnocentrically and racially oppressive regimes are pariahs that should be heavily sanctioned and boycotted until they cease to exist, e.g. Apartheid in South Africa.
2 Replies
-3
Reply Thu 28 Oct, 2021 04:12 pm
@InfraBlue,
"Refusing to accept Israel's existence" is a war crime.

In addition to being a war crime, it gives Israel the right to use military force against the Palestinians.

International law also gives countries like Israel the right to defend themselves with military force when people like the Palestinians wage illegal wars of aggression against them.
1 Reply
-4
Reply Thu 28 Oct, 2021 05:05 pm
@InfraBlue,
InfraBlue wrote:

the fact that the Zionist regime ethnocentrically oppresses the Palestinian people.

That isn't a fact. Israel is a Jewish state.

If the Palestinians converted to Judaism and stopped murdering people I'm sure they would be welcome in Israel.

That oppression is the crux of the conflict in Palestine.

No. The crux of the conflict is: Muslims trying to steal everyone else's land and holy sites.
1 Reply
-2
Reply Fri 29 Oct, 2021 02:02 am
The trial of former prime minister Benjamin Netanyahu resumed Monday after a three-month break, with the continuation of the cross-examination of former Walla website CEO Ilan Yeshua.

Netanyahu, now leader of the opposition, was not present at the hearing at the Jerusalem District Court, having been granted an exemption.

Yeshua is the first witness to give testimony in Netanyahu’s trial. He is a top witness in Case 4000, in which Netanyahu is alleged to have abused his powers when he served as both premier and communications minister from 2014 to 2017.

International law forbids wars of aggression like the one the Palestinians are waging against Israel.

International law also gives countries like Israel the right to defend themselves with military force when people like the Palestinians wage illegal wars of aggression against them.

the fact that the Zionist regime ethnocentrically oppresses the Palestinian people.

That isn't a fact.

Wrong; that is a fact.

Israel is a Jewish state.

Israel is a Jewish state predicated on the oppression of the Palestinian people.

If the Palestinians converted to Judaism and stopped murdering people I'm sure they would be welcome in Israel.

That oppression is the crux of the conflict in Palestine.

No. The crux of the conflict is: Muslims trying to steal everyone else's land and holy sites.