Any Theories about the rapid tidal fluctuations in Maine?

BOOTHBAY HARBOR, Maine"Meteorologists are baffled by rapid tidal changes along the Maine coast, which damaged some boats and piers.

Witnesses say low tide turned and became high within a matter of minutes on Tuesday afternoon. The changes occurred six or seven times. The National Weather Service says reports from several locations indicated that water levels fell and rose from 4 feet to as much as 12 feet during the event.

In a public information statement, the weather service says the cause "remains a mystery and may never be known."

It said significant rapid rises and falls in tide levels were observed around 3 p.m. in Boothbay Harbor, Southport and Bristol. The statement said rapid surges can be caused by the underwater movement of land, most often due to an earthquake, or due to slumping of sediments along a steep canyon or shelf, but no earthquakes were reported in the area Tuesday.

A similar event occurred on Jan. 9, 1926, in Bass Harbor, the statement said.http://www.boston.com/news/local/maine/articles/2008/10/30/coastal_maine_tide_change_a_mystery/?p1=Well_MostPop_Emailed7

THE CAUSE OF YESTERDAY'S UNUSUAL TIDE FLUCTUATIONS ALONG THE
MID COAST OF MAINE REMAINS A MYSTERY...AND MAY NEVER BE KNOWN.
SIGNIFICANT RAPID RISES AND FALLS IN TIDE LEVELS WERE OBSERVED
AROUND 3 PM IN BOOTHBAY HARBOR, SOUTHPORT, AND BRISTOL. ONLY
VERY MINOR FLUCTUATIONS WERE NOTED AT TIDE GAUGES ALONG THE
COAST.

THERE ARE SEVERAL POSSIBLE EXPLANATIONS FOR YESTERDAY'S EVENT.
RAPID SURGES CAN BE CAUSED BY THE UNDERWATER MOVEMENT OF LAND,
MOST OFTEN DUE TO AN EARTHQUAKE, OR DUE TO THE SLUMPING OF
SEDIMENTS ALONG A STEEP CANYON OR SHELF. NO EARTHQUAKES WERE
REPORTED IN THE AREA YESTERDAY. IN RARE INSTANCES, LARGE AND
RAPID SURGES CAN BE GENERATED BY STORMS. IN EITHER CASE, THE
BATHYMETRY OF THE OCEAN FLOOR REFLECTS AND REFRACTS THE WAVE
ENERGY AND CAN CAUSES SIGNIFICANT VARIATIONS IN TIDE LEVELS
ALONG THE COAST...AND RAPID CHANGES IN TIDE LEVELS AT A
PARTICULAR LOCATION. THESE SURGES ARE QUITE UNLIKE THE MUCH
SLOWER SURGES NORMALLY ASSOCIATED WITH COASTAL STORMS.

EYE-WITNESS REPORTS FROM SEVERAL LOCATIONS INDICATED THAT WATER
LEVELS FELL AND ROSE FROM 4 FEET TO AS MUCH AS 12 FEET ALONG
THE COAST DURING THE EVENT. THESE RAPID CHANGES IN TIDAL
LEVELS GENERATED THE STRONG CURRENTS THAT DAMAGED PIERS AND
BOATS IN THE AREA.

ALTHOUGH THESE EVENTS ARE RARE ALONG THE MAINE COAST, THEY HAVE
OCCURRED IN THE PAST. ON JANUARY 9, 1926, AN EVENT SIMILAR TO
YESTERDAY'S EVENT WAS OBSERVED IN BASS HARBOR. DURING THAT
EVENT, THE HARBOR DRAINED RAPIDLY AND THEN WAS FOLLOWED BY A 10
FT SURGE OF WATER, FOLLOWED BY TWO OTHER SMALLER WAVES. THERE
WERE NO EARTHQUAKES REPORTED ON THAT DAY. NO ONE WAS INJURED
IN THAT EVENT BUT ABOUT 50 FISHING BOATS WERE HURLED ASHORE.

There were no earthquakes and the big storm was further inland so it was probably due to underwater land slides.
0 Replies
1
Reply Sat 1 Nov, 2008 09:25 pm
The scope of the event should give some indication of it's probable source. If the source had been truly dramatic in size it would have show up as an earthquake, or created a wave along a much longer area of coastline.

As it was, I would guess that it was a very large slump of granite coming off one of the islands in that area (possibly a completely submerged island), similar to when the "Old Man of the Mountain" finally gave way, except much larger.

On the maps below, the event occurred due west of Jordan Basin (North of Portland). Many of the islands and peninsula's in that area have very steep drops and lots of granite ledge. 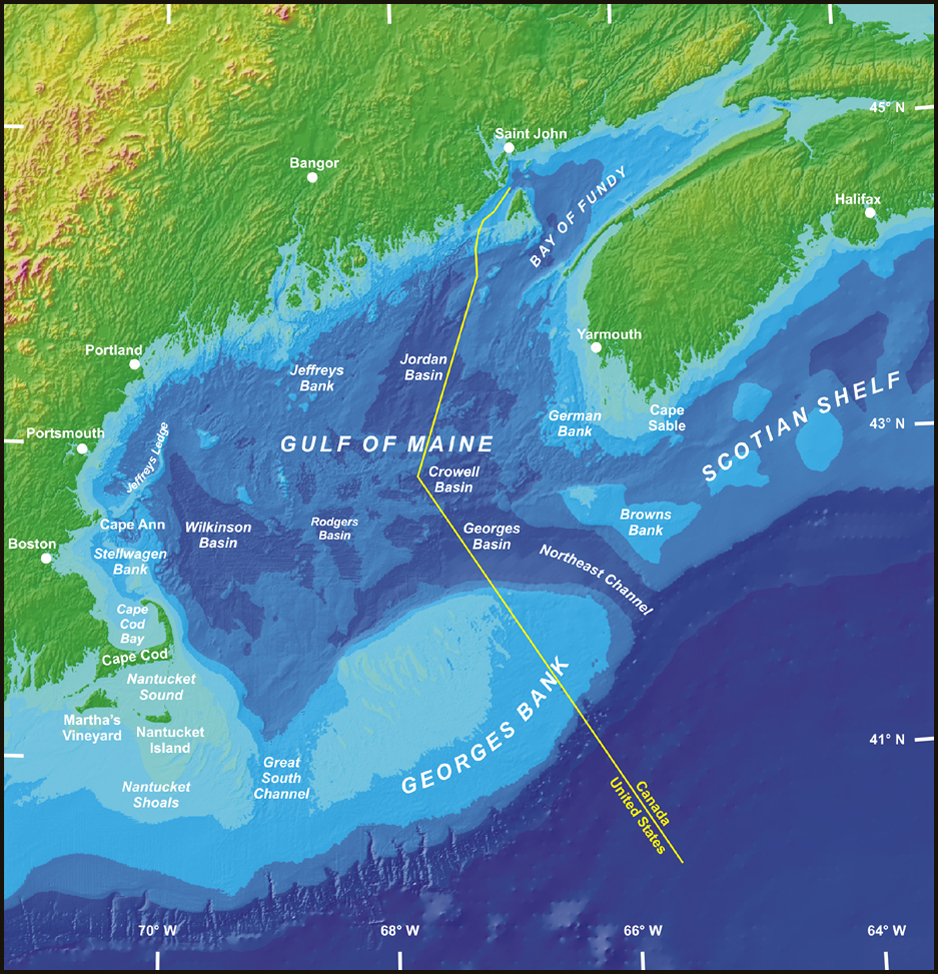 The shape of the channels leading into the various harbors and bays tend to amplify the waves coming into them, so even though the event probably affected a somewhat larger area around the locations reported, it may have only been noticed (more dramatic) in the "amplified" areas.

That's my wild guess for the evening. Somewhere in the cold, dark waters of Maine, The Old Man of the Sea (like the Old Man of The Mountain) has apparently fallen off his throne.

That's my wild guess for the evening.

It doesn't sound so wild to me. You're making good sense.

I'm glad somebody thinks so

And the waves bounce back and forth on the various landmasses?

Yes, the site of the event probably caused an underwater ripple just like a pebble going into a pond, but much larger of course.

The ripples (quite sizable) radiated out in a spherical form as you would expect, but where they entered the channels they were compressed and amplified as they approached the shore. I think this is how the Bay of Funde works as well, except that it's an amplification of the standard tidal cycle because it's a much larger channel.

0 Replies
1
Reply Sun 2 Nov, 2008 06:45 pm
Good theory, but wouldn't even an underwater landslide trigger seismographs?
1 Reply
1
Reply Tue 4 Nov, 2008 07:24 am
@Foxfyre,
Underwater landslides (similar to Rosborn's theory) are one hypothesis. Storm squalls is another. Several of these incidences have been recorded. One that doesn't seemingly fit with Rosborn's theory is the one in Florida. No rocky ledges there and no deep and narrow inlets. I wonder if we'll ever know.

A similar occurrence in Florida more than 15 years ago continues to baffle researchers. A series of 12- to 15-foot waves hit Daytona Beach on July 3, 1992, injuring more than 20 people and lifting and tossing dozens of cars.

Jeff List, an oceanographer at the US Geological Survey at Woods Hole said he and other researchers studied the occurrence, but no one has been able to pinpoint the cause. And he said similarly enormous waves appeared once on the Great Lakes.

Could such a wave or waves enter Boston Harbor, or even engulf the Massachusetts coast?

"It seems a little unlikely one could hit Boston," List said. "But then again, these things are always surprises when they occur."

A squall line surge, which occurs when fast-moving storm winds sweep over water that is traveling the same speed, can create such a wave. (The speed of waves is directly related to wind speed and the depth of the ocean at any given point.)