A DEVELOPER stepped back in time when he opened the door to his new property and found a perfectly preserved wartime corner shop.

Alan Duffy, 58, had bought the Burnley Road property in Accrington unseen at an auction and had no idea what lay behind its boarded up exterior.

And he said the moment he walked through the door was like stepping onto the set of classic comedy show Open All Hours.

He struggled to take it in as he saw the traditional wartime corner shop decorations and furniture, complete with products on the shelves from a bygone time.

As he looked around, he discovered handwritten invoices dating back to 1927.

It is thought the store had been closed for at least 20 years, but its decor did not look like it had been updated since it opened during the Second World War.

Alan found a magazine on the shelves called Titbits from January 23, 1971, which declared: ‘Elsie Tanner is as common as muck’ on its front page.

The couple that ran it had to close it back in the seventies, and on the last night they closed the door never to open it again. They kept living in the apartment above, or maybe it was just the man or the woman who was left.

Then he or she died, and someone, their son maybe, inherited the place. He opened the pub and found it exactly as it had been left that night -- old currency still in the till, cigarette butts in the ashtrays, glasses neatly lined up, and all the interior dusty and preserved in detail from what a traditional English village pub was like in the seventies.

He was considering turning it into a museum, but wasnt sure how to go about it or whether it was possible..
0 Replies
1
Reply Wed 15 Oct, 2008 09:33 am
I cant find anything back about that place, but apparently this kind of thing is not an uncommon occurrence:

Wanted - GI memories of the English pub frozen in time 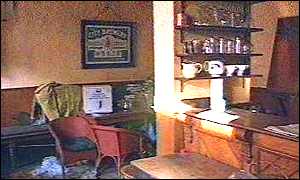 A Devon pub which has not changed since last orders were called more than 30 years ago is to be re-opened as a museum.

Now the search is on for the American servicemen who made The Valiant Soldier their regular during the war years.

The pub in the village of Buckfastleigh has remained untouched since the last pint was pulled in 1965.

Beer glasses remain unwashed, there is still old currency in the till, a darts match has been left unfinished and unopened bottles of wine and beer are stashed behind the bar.

What makes it historically significant is that it is one of the few remaining English pubs with the look and feel of the 1940s that has not either been pulled down or refurbished.

The Valiant Soldier was sold to landlady Alice Roberts in 1965 on the understanding that she did not open it again as a pub. She and her husband had been licensees since just before the war.

Locals say there were several pubs in the village at the time and the breweries wanted to reduce the competition. Mrs Roberts continued to live above the pub until last year although the bar and the lounge remained closed.

During World War II, The Valiant Soldier was a regular haunt for American GIs based on the outskirts of the Buckfastleigh. Mrs Marjory Stryjski was 14 at the time and remembers the buzz the Americans brought to the village.

"We had some great times, the Americans were full of fun. They were always organising dances at the Town Hall and even had their own dance band. The local girls had a fine time learning to jitterbug," she said.

Mrs Stryjski, who married a Polish serviceman from the nearby Ashburton camp, says she was too young to date the American soldiers. But she and her friends went out of their way to walk past them on the way home from school and were introduced to American chewing gum and candy.

"The Americans were based at two sites around the village. Some were down on a large field by the Dart Bridge and others were based near what we called 'The Cook House' in Victoria Park and 'The Warehouse' on Totnes Road", she said.

The Valiant Soldier apparently became the Americans' favourite pub because of its proximity to the local cinema, which has since been pulled down, and the Town Hall. Films were shown seven days a week and twice on Saturdays and the GIs used to pop into the pub for a quick pint during the interval.

Dances were held in the Town Hall two or three times a week and again the pub was the most favoured watering hole for the thirsty servicemen.

According to Marjory Stryjski, the Americans called the village 'Sleepy Valley' because it was so quiet. "It certainly felt like that after they left, the place seemed deserted," she said. "I have never seen any return which is a pity because we all had a smashing time back then."

The pub has been bought by Teignbridge District Council and is being turned into a museum by a group of local people headed up by Brian Cross.

Organisers of the project have been given associate membership of the Area Museum Council in Taunton. Mr Cross is now looking for ways to fund the venture and is hoping for money from the National Lottery to help make ends meet. He feels the American link is a key part in the pub's history.

Mr Cross says the war years were definitely the pub's busiest time when the village was thriving. "Its like stepping back in time. It still smells like a pub, not an unpleasant smell, but the smell of smoke and beer," he said. 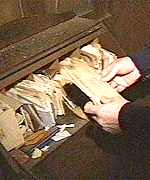 Letters, papers and diaries dating back to the war years

In the corner of the pub, behind the bar, Brian Cross has found a desk of old paperwork and diaries. He is now involved in cataloguing the items so he can begin to piece together more of its history.

He is also hoping any American servicemen who remember drinking in The Valiant Soldier in 'Sleepy Valley' will get in touch to add their memories to the museum's records.

Any American GIs who want to pass on their war year memories of Buckfastleigh can send them to us at [email protected] and we will forward them to Brian Cross at The Valiant Soldier museum.

0 Replies
1
Reply Wed 15 Oct, 2008 09:52 am
@Walter Hinteler,
we don't have a corner shop , but i have a basement .. pardon me : REC ROOM !
by dec. 1 , we'll have lived in our house for 45 years . so when i want to step back in time i just have to go down one flight of stairs : there are tools i brought over from germany (i never thought i'd work in an office again and my father-in-law suplied me with several tools to turn me into a jack-of-all-trades - some i've even used ! ) ; there are my old school-graduation papers , letters of recommendation from my german employer , our german identity pass (passports are and canadian "landing card" are in the safe-deposit box at the bank ... ...
mrs h mentions on occasion that a clean-up and clean-out is in order . so i'll show her some stuff that she brought into the marriage and ask if i can dispose of it . the answer usually : "just not yet ! " - so i'm saved <GRIN> .
should take a picture sometime ; it would scare heck out of any viewer .
so anytime wanting to step back in time ... come on down !
hbg
0 Replies
1
Reply Sun 19 Oct, 2008 04:32 am
After a recent 'back of the kitchen cupboard'clearout I may be ableto provide a few items if they want toturn the shopinto a museum!
0 Replies