I'll vote for McCain if Palin takes off her top.

Forums: Humor, Politics, General, Mccain, Republican
Email this Topic • Print this Page
Reply Wed 3 Sep, 2008 08:06 pm
Yep, that's all she has to do tonight to win my vote. Whip out the twin Alaskan Titan missiles and I'll vote for McCain. That's all I ask. She doesn't even have to do a speech, as far as I'm concerned. Just show your fellow Americans some skin.

Busty vice presidents. That's the kind of change I can believe in. 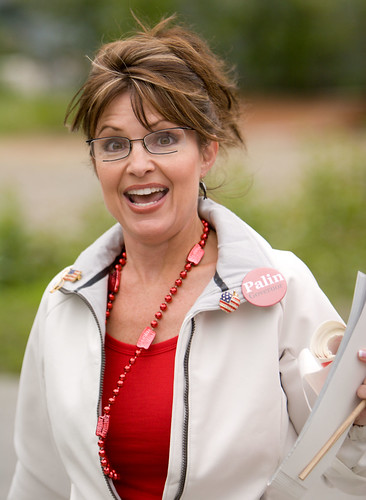 (Kicky why do you have no avatar, you are smarter than me. Have you no friends?)

I'm just lazy is all.

Now, come on, why don't you help me cheer our new vice president when she rips off that breakaway suit and reveals her vice presidential "credentials."
1 Reply
1
Reply Wed 3 Sep, 2008 08:47 pm
@kickycan,
Because you care. Because you dare to dream...your patriotism brings a tear to my eye Kicky

Vote early and often, buddy.
1 Reply
0
Reply Wed 3 Sep, 2008 08:51 pm
@LionTamerX,
okay, that was funny.
0 Replies
4
Reply Wed 3 Sep, 2008 08:55 pm
Come on Kicky, you're missing all her other strong points by focusing on her boobs. She loves to shoot animals from helicopters, wants to sue the government for thinking polar bears should be put on the endangered species list because it could really screw up her dreams of drilling oil wells on every inch of Alaska, she believes in Adam and Eve as a valid theory to challenge evolution, she voted against women’s right to chose, she voted against women’s right for equal pay. And my personal favorite to show her Christain spirit - she used her employees to threaten high officials to get them to fire a state trooper because he divorced her sister. This woman is the dream of every mindless, paranoid, bunker building Republican in America.
1 Reply
2
Reply Wed 3 Sep, 2008 09:09 pm
@Green Witch,
Yeah, yeah...but she's freaking hot! Come on, Sarah, whip out those weapons of mass distraction!!!
2 Replies
2
Reply Wed 3 Sep, 2008 09:13 pm
@kickycan,
seriously kicky....I don't get that she's so hot.....
2 Replies
0
Reply Wed 3 Sep, 2008 09:17 pm
@kickycan,
Crap. No boobs. I will stick with the Obama ticket. But I still could be persuaded, perhaps at some future time. If she lets a boob accidentally slip out at some point, or manages to accidentally get squirted with a hose while wearing a white blouse and no bra...my vote can still be had!
0 Replies
0
Reply Wed 3 Sep, 2008 09:22 pm
@Bi-Polar Bear,
of course she is hot, her campaign button says she is. The truth is what you are told it is, it is in the constitution or something,
0 Replies