This is the first time I really like a Hallmark (style) movie.
0 Replies
3
Reply Wed 4 Feb, 2015 06:42 am
@tsarstepan,
I had a gander at Leviathon and thought it was very insightful. Dark, yes, but I like dark sometimes. Thanks for the recommendation.
0 Replies
1
Reply Fri 10 Apr, 2015 04:25 am
Last night we all went to see the Globe's 2006 production of Titus Andronicus. Very gory and well worth it. It was only shown once, and the cinema was not exactly packed either. 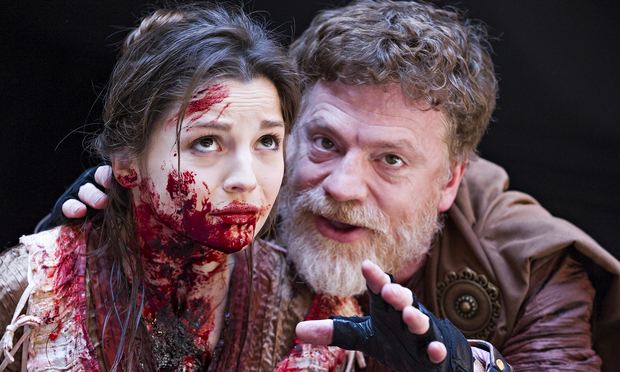 Edit: Oops. Not late. But thought to be a collaboration. I think of it as being one of the Jacobean revenge dramas only worserer.

1 Reply
1
Reply Sun 12 Apr, 2015 01:37 am
@dlowan,
They were probably all collaborations to a certain degree.
1 Reply
1
Reply Sun 12 Apr, 2015 01:42 am
@izzythepush,
My biggest problem is all the events happening so quickly at the beginning. He arrives in Rome, sacrifices a prisoner, refuses the crown, supports one brother for the crown, pledges his daughter to that brother who instead runs off with the other brother and Titus then kills one of his sons for dishonouring him by supporting her in her escape. And he's only been on stage for about ten minutes
1 Reply
2
Reply Wed 22 Jul, 2015 08:06 am
I saw Mr. Holmes last night. It is wonderful.

I am thinking about acting largely because Ian McKellan is so amazing in Mr. Holmes.

It sometimes helps to see an actor speak with an interviewer. Of course, a television interview is a different kind of acting but . . . I have a fond memory of Sir Ian on The Daily Show, saying "I am Gandalf and Magneto" and the way he and Patrick Stewart are enjoying vigorous and humorous seniorhood.

McKellan's superhero status is particularly funny because he is not physically imposing.

The year Forest Whitaker won his Oscar for playing Idi Amin in the The Last King of Scotland, it helped that he appeared on talk shows as his teddy bear self. He couldn't be further from the dictator. That was the same year that Peter O'Toole was nominated for what was his last picture, Venus.

O'Toole was one of the prettiest-to-look-at actors to ever grace a stage and did fine work in many films. I think he ought to have won the Oscar for The Lion in Winter but not for Venus, which was a somewhat lousy film. It was a good thing sentimentality did not deprive Whitaker of his Oscar but he is actually still rather young at 54.

However, when I think of some of O'Toole's roles, he never seemed to shake the element of baroque that he carried with him. Lawrence of Arabia was baroque because of its epic sprawl and The Ruling Class and My Favorite Year were just simply baroque in their subject matter.
Sir Ian's work in Mr. Holmes shows him playing the detective in two periods: just after WWI and WWII.

In the WWI flashback, he is a vigorous 60 and very nattily dressed. As a woman, I love to see an actor well turned out. Men's clothes are deplorable most of the time. At the end of the film, in 1947, his character is a crumbling 90+, aware of his diminishing power, often in pajamas and a robe. My biggest problem is all the events happening so quickly at the beginning. He arrives in Rome, sacrifices a prisoner, refuses the crown, supports one brother for the crown, pledges his daughter to that brother who instead runs off with the other brother and Titus then kills one of his sons for dishonouring him by supporting her in her escape. And he's only been on stage for about ten minutes


The epitome of excess! Ben Jonson would have been turning like a spinning top in his grave!
0 Replies
1
Reply Thu 23 Jul, 2015 05:02 am
@dlowan,
Next up is Othello which will be broadcast to cinemas across the World on 26th August. This time Iago is black as well.

Here's a link to the webpage which tells you your nearest cinema.

I remember the fight going on regarding the rightful owner of the Klimt painting. Im horrified that personal property was conficated by the Master race completly ignored the actual owner of the painting. The Jews who had the painting commissioned were robbed at their home and had to watch as the Nazis confiscated the beautiful picture and it wound up in Hitler's collection. Hitler had even more deadly plans for Jews who had high technical abilities, were
gifted musicians, gifted artists, gifted singers. As far as Europe, they have have had a diffficult time in Eastern Europe to re-home these masterpieces. There are many many paintings considered masterpieces that Nazi sympathizes claim as their booty, and have become beloved treasures for the local population. Stolen Property can never be ripped from their homes of the people who paid KLIMT, to create a masterpiece of their loved ones.