Forums: Health, Human Interest Stories
Email this Topic • Print this Page
Reply Sat 26 May, 2007 02:01 pm
saw a feature on "doctor fish" on the science channel .
in japan and other countries "doctor fish" are kept in large pools of warm water and people come to stick their feet into the pool . the tiny doctor fish come along and nibble off all the dead skin ! apparently it is also a useful treatment for people suffering from psoriasis !
hbg 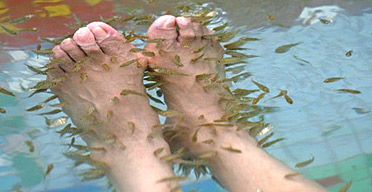 Exfoliation is a key part of any skin beautifying treatment. But forget salt scrubs, rubs and foot files. Why not try something far more efficient: the toothless mouths of hundreds of tiny, voraciously feeding fish?
"Doctor fish" - so named for their ability to produce healthy, glowing results from even the most crusty or diseased epidermis - are the key ingredient in a spa and skin treatment becoming increasingly popular across Japan, China, Turkey and Europe. The idea is that you immerse your feet, hands or, if you are brave enough, your entire body in a warm pool that swarms with hundreds of hungry minnow-sized feeders. The fish zoom in on your most crusty, flaky or scabby skin and chomp away at it to reveal the fresh layer beneath. According to the spas and their enthusiasts, you emerge refreshed, healthy, buffed and glowing.

Doctor fish are a species called garra rufa and originate in pools near two small Turkish towns, Kangal and Sivas. They have long been known for their ability to treat the symptoms of skin conditions such as psoriasis. The Kangal spa, the biggest of the two, has been a healing destination for more than 100 years and since 1988 has been a treatment centre for psoriasis sufferers from all over the world. Affecting around 2% of people in the UK, psoriasis is a recurrent skin condition which causes sufferers to develop raised red patches of skin covered with silvery scales - "psoriatic plaques" - that can be very sore or itchy; the playwright Dennis Potter famously struggled with a severe form of the condition.
In Kangal, the water's high temperature makes it difficult for any nutrients to survive; the doctor fish are therefore ravenous. Handily, they also have a penchant for dead, diseased or scabby skin. With their gummy mouths they strike and lick the psoriatic plaques, eating away the scaly skin that has been softened by the warm spa pool. Their nibbles can cause minor bleeding, which the selenium-rich water and high-altitude Turkish sunlight then heals.

"We have about 3,000 visitors every year suffering from skin conditions such as psoriasis," says Koray Altan, manager of psoriasisfishcure.com, the company that organises bookings. "The combination of the doctor fish, the chemical composition of the water and the heat of the water really works. Every sufferer will go away with clear skin if they follow the treatment exactly [they must spend eight hours a day for 21 days in the water]."

However, this is not a permanent cure. "The results will always be temporary," Altan says. "We encourage visitors to see this as the starting point in the battle against the condition."

But doesn't immersing yourself in a pool laced with fish that have been gorging on people's scabs offer some chance of infection? The bleeding issue, alone, would surely be a big concern? "The HIV virus, for example, cannot survive outside the human body and fish cannot transmit the virus from one person to another," says Altan. For hygiene reasons, the centre advises patients to keep a distance from others in the pool and everyone has to bring their own slippers and towels.

Dr Tim Clayton, a consultant dermatologist at Alder Hey Children's Hospital in Liverpool, agrees that the treatment is safe. "I've known of a few patients trying the treatment," he says. "The overall idea that the fish feed on the thickened dead skin cells found on the surface of skin is sound. It is certainly a novel and interesting way of alleviating thickened psoriasis. It's unlikely to be a cure, but may help improve the skin surface. A good holiday and the sunshine also probably helps, since psoriasis can be exacerbated by stress and ultraviolet light can improve the condition - but people should take care to avoid excessive sun exposure due to the risks of skin cancer.".

Therese Dillon, who suffered from severe psoriasis for years and had tried everything to treat it, came across the Sivas spa while on holiday in Turkey. "The first time I got in was very scary - hundreds of the fish came towards me. My legs and back were very bad, and they were all over them. I got straight out. Eventually, I realised the fish were lovely - not at all aggressive." After just four days, "the effects were fantastic - my skin was clean". The results lasted four months.

Dillon was so convinced by the fish that she spent the next six years, with her Turkish husband, setting up a clinic - Skin Therapy Ireland - to treat psoriasis, dermatitis and eczema. It opened at the end of last year and is the sixth doctor fish skin clinic in Europe (the others are in Germany, Austria and Croatia).

The Kangal spa maintains that the chemical and mineral components in the water (visitors drink it - from a clean source - as well as bathe in it) are as important as the fish. Dillon, however, believes that the saliva of doctor fish is the key to the treatment's success. In the absence of a clinical trial, the science is perhaps muddy. But this, along with the "ick" factor of being eaten by fish, does not seem to deter people. Dillon has been overwhelmed by inquiries and is already looking for an investor to expand her business.

The exfoliating efficiency - and novelty value - of doctor fish makes them hot property in the leisure market too. In Japan enterprising spa owners have realised that as an exfoliation gimmick for healthy skin, this one has legs (or fins). They have begun to import buckets of doctor fish from entrepreneurial breeders and are promoting them as nature's best pedicure.

Canadian journalist Thomasina Larkin, who lives in Tokyo, tried both the foot and hand fish exfoliating treatments at Ooedo Onsen, a trendy Japanese spa. "I was totally freaked out. I stayed in the pool for about 15 minutes, as long as I could bear, and the fish - about 500 minnow-sized feeders - continued to flock to my feet. It felt like a cross between tweezers and suction cups pecking at me and tickled to the point where I had to pull them out several times." So, how does it compare with a standard foot file? "It wasn't quite as relaxing as a usual exfoliation because it tickled too much for me to be able to just sit back and enjoy," says Larkin.

Certainly, doctor fish seem happy to devour any old epidermis - in fact, the older and thicker the better (if you put a child in the water next to an old person, the fish will apparently go for the old person). However, despite spa claims that the fish offer a relaxing "micro-massage", sticking your feet in a bucket of minnows is hardly swimming with dolphins. ...had started a new career.
0 Replies
1
Reply Mon 31 Mar, 2014 08:55 pm
@hamburger,
I suffer from psoriasis,my parents went to doctors in many places with the hope of curing me of the disease. However, my conditions did not get any better despite the expense of a lot of money. They decided to have a try and took me to a Chinese hospital. The affacted sites on my face had improved significantly in less than a month. After reinforcement treatment of experts, I have completely recuperated my health and I have become cheerful. I would like to share this with whoever has the same problems,you can talk to their doctors on the website of vitiligotcm.
0 Replies
1
Reply Fri 4 Apr, 2014 05:42 pm
@hamburger,
I find this to be very gross. I would never do it. I would just by a pumice stone and use that.
0 Replies