Zionism and the Third Reich

Forums: History, Crazy Talk
Email this Topic • Print this Page
Reply Mon 7 May, 2007 11:07 am
Zionism and the Third Reich

In spite of the basic hostility between the Hitler regime and international Jewry, for several years Jewish Zionist and German National Socialist interests coincided. In collaborating with the Zionists for a mutually desirable and humane solution to a complex problem, the Third Reich was willing to make foreign exchange sacrifices, impair relations with Britain and anger the Arabs. Indeed, during the 1930s no nation did more to substantively further Jewish-Zionist goals than Hitler's Germany...

From the "About Us" page at the Institute for Historical Review:

You can read the Institute for Historical Review's "About Us" page here.

The Wikipedia article on the Institute for Historical Review writes:

The Institute for Historical Review (IHR), founded in 1978, is an American Holocaust denial organization which describes itself as a "public-interest educational, research and publishing center dedicated to promoting greater public awareness of history." Critics have accused the it of being an antisemitic "pseudo-academic body" with links to neo-Nazi organizations, and assert that its primary focus is denying key facts of Nazism and the genocide of Jews and others. It has been described as the "world's leading Holocaust denial organization." IHR published the non-peer-reviewed Journal of Historical Review.

The Wikipedia article on the Institute for Historical Review writes:

Good try!
0 Replies
1
Reply Mon 7 May, 2007 12:53 pm
A couple of publications of the "Institute for Historical Review" can be called -legally- "nonsense", "history falsifications" and, what I like best, "brainwashing of uneducated" here

0 Replies
1
Reply Mon 7 May, 2007 12:54 pm
So tell me, "Good Try" boy, how do you account for the "Institute for Historical Review" About Us page statement? How do you account for Walter's remark? I'm sure that Walter will be happy to provide sources for IHR's links to neo-nazi organizations. Shall i send him a PM?
0 Replies
1
Reply Mon 7 May, 2007 12:55 pm
google gives a lot :wink:

"Mark Weber is Director of the Institute for Historical Review, an independent 'think tank' and publishing-educational enterprise based in southern California.

During the five years he lived in Washington, DC (1978-1983), he carried out extensive historical research at the National Archives and the Library of Congress. Weber is the author of many articles, reviews, and essays dealing with historical, political, and social issues, which have appeared in a variety of periodicals, and in a range of languages."

The Institute for Historical Review sponsored the Zündel campaign as well, btw.

Once a leading voice in the international movement to deny the Holocaust and vindicate Hitler and the Nazi regime, the Institute for Historical Review has been in decline for several years. It has been unable to convene a major international conference or publish its Holocaust-denying Journal of Historical Review since 2002. Currently its activities have been limited to hosting minor extremist gatherings -- usually featuring a speech by IHR director Mark Weber and occasionally another Holocaust denier such as David Irving -- and operating its Web site and its e-mail list. Weber is also a supporter of embattled Holocaust denier Ernst Zündel. IHR's most significant recent activity was a conference it conducted together with the neo-Nazi National Alliance in Sacramento, California, in April 2004.

The Mad Revisionist (working from his home on the Moon) found the treatment he recieved at the hands of the IHR to be shabby:

Recently, THE MAD REVISIONIST was contacted by a Mr. Theodore O'Keefe, one of the senior directors of the Institute for Historical Review. Pleased by the attention of a representative from a revisionist organization that was so inspirational to our own work, we inquired as to the possibility of our breaking into the print media through a submission to their illustrious periodical - the Journal for Historical Review. We were encouraged by the JHR's reputation for supporting dissident historians with challenging and controversial opinions, and by the fact that their methods, approaches to evidence, and conclusions tended to be so similar to ours.

The response was shocking and disillusioning. While at first supporting THE MAD REVISIONIST's right to freedom of opinion, Mr. O'Keefe's tone swiftly changed when he learned the nature of the conclusions drawn by our revisionist research. In the end, he did not simply reject our submission, but refused to even consider it - even voicing support for the persecution and exclusion of our views. No explanation was given as to why our theories warranted such exceptional behaviour, even when an explanation was requested.

Perhaps it was because of the Mad Revisionist's position on the Jews:

Are you under the delusion that Jews exist? That is a common misconception fostered by vicious liars.

DISMANTLING THE ARGUMENTS FOR THE EXISTENCE OF JEWS

Some will argue that Jews exist on the basis of historical records. Such records do in fact go back thousands of years. Now ask yourself: who wrote most of these records? The Jews themselves! Of course you can't believe them when they tell you they exist! They obviously have some unscrupulous interest in convincing you of their existence. What else could account for it?


3. EYEWITNESSES WHO CLAIM TO HAVE SEEN JEWS

Some untrustworthy witnesses claim to have seen, spoken with, or even been married to Jewish people. We have only to ask, How much did the Great Jewish Conspiracy pay them to say this? It must be understood, a person who makes an outrageous statement like this is no different from one who claims to hear the voices of loved ones from thousands of miles away (See: Telephone Hoax).


4. PEOPLE WHO CLAIM TO BE JEWISH

It is reported that a small percentage of Jewish people actually claim to exist. This is, by far, the cleverest and most insidious lie of anything in the repertoire of the Jewish Conspiracy. Of course they claim to exist! What else did you expect?


A PROOF THAT JEWS DON'T EXIST: Kosher hot dogs. You can't live on that stuff.

THEREFORE, the real reason the Holocaust didn't happen is that JEWS DON'T EXIST!!

Holocaust denial organization, founded 1979 by Willis Carto. In 1985 the IHR parent organization, the Legion for the Survival of Freedom, received a bequst of $7.5M from Jean Farrell, grand-niece of Thomas Edison. San Diego Superior Court Judge Ruston G. Maino found that Carto diverted much of this money to his Liberty Lobby. IHR is no longer connected to Carto.

Walter's right, there's a ton of stuff to be found online. I like the Mad Revisionist best, though, he has the best way to deal with idiots like that--ridicule.
0 Replies
1
Reply Mon 7 May, 2007 01:17 pm
They already know about such bigoted attacks, thank you.

The IHR steadfastly opposes bigotry of all kinds in its efforts to promote greater public understanding of history. It does not seek to whitewash any past regime or rehabilitate any ideology. The IHR is proud of the backing it has earned from people of the most diverse political views and racial and ethnic backgrounds.

A featured speaker at the 13th IHR Conference (May 2000) was John Sack, who is Jewish. A report by this veteran American journalist and author based on his participation in the three-day meeting appeared in the February 2001 issue of Esquire magazine. Rejecting the often-repeated lie that the IHR and its supporters are 'haters' or bigots, Sack described those who spoke at and attended the IHR conference as 'affable, open-minded, intelligent [and] intellectual.' He also affirmed that numerous revisionist arguments and findings are, indeed, true.

The Institute has been a target of hate groups. It has come under repeated assault from the Jewish Defense League - identified as a terrorist group by the FBI. On July 4, 1984, the JDL destroyed the Institute's office and warehouse in a major arson attack. Estimated property loss was more than $400,000, including tens of thousands of books, rare documents, irreplaceable files and expensive office equipment. This fire-bombing climaxed a months-long campaign by the JDL that included numerous death threats by telephone and mail, extensive property damage, five relatively minor fire bombings, one drive-by shooting and two physical assaults.

In addition, major Jewish-Zionist groups such as the Simon Wiesenthal Center ( Los Angeles ) and the Anti-Defamation League ( New York ) have for years smeared the IHR, maliciously misrepresenting its work and purpose.

0 Replies
1
Reply Mon 7 May, 2007 01:20 pm
Do they also know a way to rebuild their funding, so that they can once again publish their Journal of Historical Review, which has not been published in almost five years?

Do they know how to deal with people like the Mad Revisionist, who make them look like the monkeys they really are?
0 Replies
1
Reply Mon 7 May, 2007 01:22 pm
Setanta wrote:

Do they know how to deal with people like the Mad Revisionist, who make them look like the monkeys they really are?

There is no point in dealing with 'Mad' Revisionist's.
They don't call him that for nothing...

0 Replies
1
Reply Mon 7 May, 2007 01:24 pm
He's a helluvalot more entertaining than you, and presents much more credible arguments than we are used to seeing from you. C.f. his cogent argument that Jews don't actually exist. You ain't got a patch on that boy.
0 Replies
1
Reply Mon 7 May, 2007 02:08 pm
I've just realized that nobody had even attempted to refute the article (OP). However, everyone had a go at attacking the messenger/source.

You folks are good at de-railing...got to give you credit for that.

The left-wing anti-semites just appall me.....

Allow me to break it down for you. We have a rogue political party which never learned any new skills coming out of the 1930s; all they even claim to know how to do is represent victim groups, and they work 24/7 CREATING victims where none exist in nature. Moreover, they feel they have some sort of a God-given right to rule and that it absolutely does not matter what they have to do to accomplish that end, even if it means ****ing with the basic demographics of the nation and importing third-world voting blocks for themselves in wholesale lots.

Moreover, this rogue political party or at least major elements of it has determined to include slammites as one of its designated victim groups, and apparently they see no real future in viewing Jews as victims of anything any more and are willing to let them go. The slammite hatred fixations come with the new territory.

Hispanics are the most major new designated victim group. Everywhere I go any more, and everything I ever do which involves swipe cards, the first thing I see is "Pick a Language: English or Spanish".

I mean, what the ****???? In the apartments where I live we have people from 30 African countries and every single one of them either speaks English when they get here or is speaking it eight months later, and many of these people come from places whose languages bear no relationship to English at all, meaning that the effort to learn English for them has to be several times what it would be for a Spanish speaking person.

The obvious difference is that there are never going to be enough people here from Ethiopia, Sierra Leone, or Nigeria for demoKKKrats to show any interest in them as a designated victim group. Nonetheless, the conclusion which somebody like Quinton Tarantino would rightly draw from what I'm describing is that it is the official position of the US government and major sectors of the American business and banking communities, that hispanics are fifty times dumber than blacks. That isn't exactly the way Tarantino would phrase it, but you get the idea....

A country like Italy with a dozen political parties can easily enough afford to have one of them go rogue. With just two of the things, we cannot.
0 Replies
1
Reply Tue 8 May, 2007 06:27 am
The face of the new left: 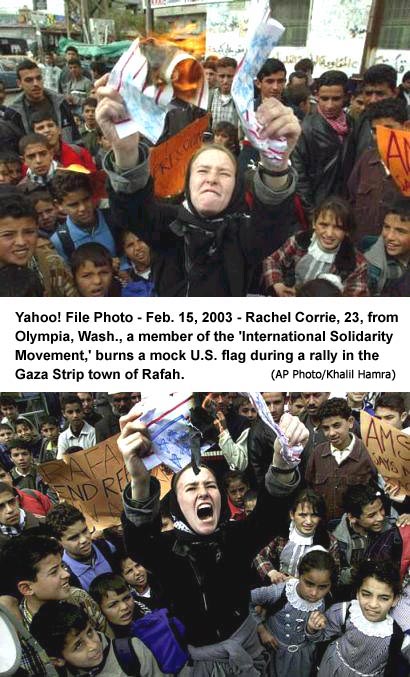 For a really good idea of how this new leftist deal works, get on freerepublic.com and do searches on 'rachel corrie'....