I'm not a Christian but I play one on TV.

I was reading the Newsweek article about the found tomb of the Holy Family and I have a couple of questions that I'm hoping someone could help me answer.

The article says the find would be controversial because "countless Christians through two millennia believe [Jesus] physically rose from the dead and, according to tradition "ascended into heaven"".

Would finding Jesus' bones change anything really? Couldn't he have physically risen from the dead and his spirit ascended to heaven? Does the Bible say his actual physical body ascended to heaven and that people witnessed this or just that they didn't find his body?

The article says "All four Gospels say that Jesus was crucified on the eve of the Sabbath; all four say that the tomb was empty when the disciples woke on Sunday morning..." This is pointed out as a way to show that there was not time for the body to be moved.

But, isn't the Jewish Sabbath on Saturday? So wouldn't the eve of the Sabbath be Friday? In the Bible, what day would they have called "the Sabbath" and what would it's "eve" be?

The empty tomb is a very important part of the Biblical story and of modern Christian theology.


The Gospel of John wrote:

Early on the first day of the week, while it was still dark, Mary Magdalene went to the tomb and saw that the stone had been removed from the entrance. So she came running to Simon Peter and the other disciple, the one Jesus loved, and said, "They have taken the Lord out of the tomb, and we don't know where they have put him!"


When I was studying for the Ministry (in a conservative evangelical church) the empty tomb was often talked about as an article of faith, and as "proof" that Christianity is true.

For American Protestants, and I think for most other flavors of Christianity, a claim to finding Jesus' bones is near blasphemy. I will bet that most Protestants will dismiss this claim, and some will take it as a slanderous slap on the face of their religion.

Interestingly enough, from what I have read, even scholars and historians are very dubious of this claim, so Christians can rest at ease.
0 Replies
1
Reply Thu 1 Mar, 2007 07:06 pm
Thanks ebrown_p.

I can see where the empty tomb would be central to Christian belief and I can understand why finding the bones of Jesus would be upsetting to many.

It sounds as if Mary and the others thought that he had been moved. Can I assume that the ascent into heaven was not witnessed and that the missing body led everyone to think that he had risen?
0 Replies
1
Reply Thu 1 Mar, 2007 07:15 pm
No... and you should understand this from the perspective of a Christian who bases their life on the belief that Jesus was a historical figure who really ressurected from the dead.

(I am sorry that my quotation didn't have enough context).

To a believing Christian the fact that Jesus physically rose from the dead is very important. In fact, Saint Paul (who wrote most of the Christian New Testament) spent a lot of energy refuting the Gnostics, who viewed the ressurection as more of a spiritual allegory.

The passage I posted from the Gospel of John was the first sign that Jesus had really ressurected from the dead. Again, that it was a physical ressurection is very important to the story, later on Jesus appears to them... and the Bible pointed states that Jesus was touched, and that he ate food (both signs that he was physically raised).

Another quote from Saint Paul (in the cotext of challenging gnostic teachings).

0 Replies
1
Reply Thu 1 Mar, 2007 07:30 pm
Oh! Yes! I do recall now about Jesus having been seen physically after the crucifixion. Thank you for the nudge! That explains a lot about what might be the reaction to finding his bones.

I'm going to have to think on that quote a bit as it can certainly be read in several different ways.

To a believing Christian the fact that Jesus physically rose from the dead is very important. In fact, Saint Paul (who wrote most of the Christian New Testament) spent a lot of energy refuting the Gnostics, who viewed the ressurection as more of a spiritual allegory.


I would add to this the Apostle Luke's account of the first appearance of Jesus before the Apostles:

35 And they told what things were done in the way, and how he was known of them in breaking of bread.
36 And as they thus spake, Jesus himself stood in the midst of them, and saith unto them, Peace be unto you.
37 But they were terrified and affrighted, and supposed that they had seen a spirit.
38 And he said unto them, Why are ye troubled? and why do thoughts arise in your hearts?
39 Behold my hands and my feet, that it is I myself: handle me, and see; for a spirit hath not flesh and bones, as ye see me have.
40 And when he had thus spoken, he shewed them his hands and his feet.
41 And while they yet believed not for joy, and wondered, he said unto them, Have ye here any meat?
42 And they gave him a piece of a broiled fish, and of an honeycomb.
43 And he took it, and did eat before them.

That verse leaves little doubt about Jesus taking his bones with him!

And, for someone like me who sits in the middle of religion, it's nice to think of Jesus showing up after such an ordeal saying "I'm hungry -- does anyone have anything to eat?"

I have always said that I don't know about the truth of any religion but that I love the idea of Jesus. This just makes me like him that much more.

So ebrown and fishin' - when the Bible talks about Sabbath eve - what day would they be speaking of, in your opinion?
0 Replies
1
Reply Thu 1 Mar, 2007 07:53 pm
Doubting Thomas fits in here someplace too, right? Poking the wounds wonderingly? 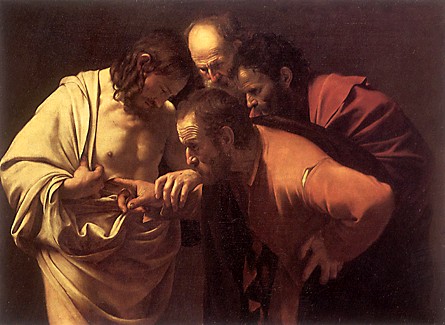 
The term "Doubting Thomas" comes from one of the accounts of Christ appearing before the disciples in physical form....Thomas had to feel his wounds before he would believe it was really him.
0 Replies
1
Reply Thu 1 Mar, 2007 08:07 pm
boomerang wrote:

So ebrown and fishin' - when the Bible talks about Sabbath eve - what day would they be speaking of, in your opinion?

I have no knowledge of anything that would lead me to think it anything other than Friday evening. As far as I know the Sabath is and always has been the equivelent of our Saturday.
0 Replies
1
Reply Thu 1 Mar, 2007 08:12 pm
sozobe wrote:

(All I really need to know about Christianity I learned in art class...)

19 Then the same day at evening, being the first day of the week, when the doors were shut where the disciples were assembled for fear of the Jews, came Jesus and stood in the midst, and saith unto them, Peace be unto you.
20 And when he had so said, he shewed unto them his hands and his side. Then were the disciples glad, when they saw the LORD.
21 Then said Jesus to them again, Peace be unto you: as my Father hath sent me, even so send I you.
22 And when he had said this, he breathed on them, and saith unto them, Receive ye the Holy Ghost:
23 Whose soever sins ye remit, they are remitted unto them; and whose soever sins ye retain, they are retained.
24 But Thomas, one of the twelve, called Didymus, was not with them when Jesus came.
25 The other disciples therefore said unto him, We have seen the LORD. But he said unto them, Except I shall see in his hands the print of the nails, and put my finger into the print of the nails, and thrust my hand into his side, I will not believe.
0 Replies
1
Reply Thu 1 Mar, 2007 08:14 pm
fishin wrote:

So ebrown and fishin' - when the Bible talks about Sabbath eve - what day would they be speaking of, in your opinion?

I have no knowledge of anything that would lead me to think it anything other than Friday evening. As far as I know the Sabath is and always has been the equivelent of our Saturday.

Actually if you read the four Gospels together, you find that Jesus was in the tomb for three days and three nights, not 'just over 24 hours'.
0 Replies
1
Reply Thu 1 Mar, 2007 08:22 pm
boomerang wrote:

Actually if you read the four Gospels together, you find that Jesus was in the tomb for three days and three nights, not 'just over 24 hours'.

According to Matthew 27:45-60 Jesus died after 9 hours on the cross. His body was lowered and, then "in preperation" and, that evening (the "eve of the Sabbath"), placed in the tomb of Joseph of Arimathea. That is one full day.

The next day (the Sabbath) he remains in the tomb (and guarded by soldiers as ordered by Pilate).

Then, according to Matthew 28:1-7 , The morning after the Sabbath Mary Magdalene and Mary return to the tomb and are told by an angel that Jesus has risen and isn't in the tomb. The day after the Sabbath being "the 3rd Day".

Mark 15 and 16, Luke 23 and 24 and John 19 and 20 repeat the same sequence of events and timeline. I have no idea where you get that the body was supposedly inside the tomb for 3 full days and 3 full nights. All 4 gospels have his body being placed in the tomb on the eve of the Sabbath, the guards watching the sealed tomb on the day of the Sabbath and Jesus no longer being in the tomb on the morning following the Sabbath - roughly 36 hours.
0 Replies
1
Reply Thu 1 Mar, 2007 08:39 pm
Oh my gosh -- now we've got Thomas in the mix!

And, ACK! real life. Seriously? That complicates things a lot in the context of my question re: moving the body.

And it doesn't shed any light on what day might be what.

And then 2 packs - you've got me searching my memory banks. If I remember correctly John was the son of Elizabeth who was Mary's cousin. So John would have been Jesus' 2nd cousin?

And Lazarus has the distinction of also having been ressurected. But who was he, exactly?

Thursday - Last Supper
Good Friday - Crucifixion
Saturday - The Sabbath - Jesus was at rest
Easter Sunday - Resurrection
0 Replies
1
Reply Thu 1 Mar, 2007 09:07 pm
The ascent into heaven doesn't take place until after Jesus makes a few appearances, including letting Thomas (doubting) place his fingers into the wound in his side.