The Age has this report, attributed to and copyrighted by Reuters--but no piccies.

This article from "Timesonline" (UK) has another picture of the model above (Esther Cañadas), stating that she is reported to have a body mass index of "only 14," whatever the hell that is supposed to mean.
0 Replies
1
Reply Thu 14 Sep, 2006 05:34 pm
BMI is supposed to measure how much you should weigh in reference to your height.
0 Replies
1
Reply Thu 14 Sep, 2006 05:36 pm
I understand that part, Miss Kay, but i just don't know the rating system.

Maybe this is what they want to see in Madrid:

(Esther Cañadas), stating that she is reported to have a body mass index of "only 14," whatever the hell that is supposed to mean.

According to my Google search, Ms. Canadas is 5' 10' and weights 7stone 2lb
(exactly 100lbs in American). Her ideal weight for someone her age should be around 132.

Getting rid of very skinny models is not going to stop any teen from wanting to be thin, it's a part of our culture that is going to be around for a long time.
0 Replies
1
Reply Thu 14 Sep, 2006 07:36 pm
I read about this last evening, whatever news site I read it on, and there was a photo with it of a skinny model...

Interesting questions re the legality of constraint and the need re modelling for the world's wannabees....
I also found it interesting that the Milan mayor-essa picked up on it, venturesome move on her part.

I write this as I follow the Sartorialist near daily.
0 Replies
1
Reply Thu 14 Sep, 2006 07:42 pm
How about getting back to women that LOOK like women?

There is no way in the world I'd ever want to look like that first blond model...honestly, she looks sick.

If sets example lost as little as 20 lbs, she'd be in a healthy range that would be attractive.

I can't see how it'd be any fun being with someone as skinny as models are now.

I mean, really guys, wouldn't you rather to be with someone who wasn't afraid of having an ice cream cone now and then?

When I look at Sophia Loren, she wasn't worried about every single bite of food....she's still too busy enjoying life.
0 Replies
1
Reply Thu 14 Sep, 2006 07:51 pm
No, that wasn't what they were after in Madrid, Set. The photo I saw showed a typical self starver or gorger with vomiting... a well represented type at the shows.

Okay, I admit it, I just wanted an excuse to gawk gruesome-car-wreck-fashion at that picture again. It scares me, but I can't look away!! 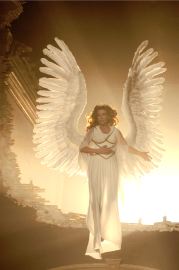 As an aside.... when I looked up voluptuous on google, I came upon this photo: 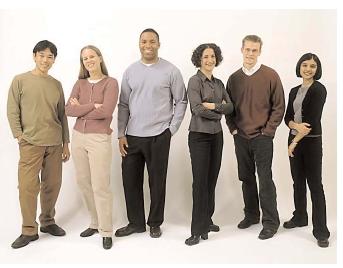 And they definitely need a fashion designer to help them out. God. The two in the middle wouldnt look bad on their own, but as a troupe this group looks so drab it hurts.

I think that's the point nimh....they didn't want you to be looking at their cloths....look at their shapes.

The normal weight by using the BMI has quite a range.

In brief, for those who want to know, a person with a body mass index between 18.5 and 25 is considered a normal weight.

Then again, you have to take into account the amount of muscle someone has...a couch potato and an active person with the same BMI will look VERY different.

The BMI is simply a guideline, but like so many other things involving body image, those little numbers themselves have become the goal, nevermind your health.

I'm sure that model with a BMI of 14 is very proud of the fact she very underwieght.

Speaking of women, if a female is standing relaxed, not with her arms above her head and stretched out, and you can see her ribs, she underweight.

Great that somebody had the guts to make that decision!!!
0 Replies