Forums: Autos, Cars, Mustang, Camaro
Email this Topic • Print this Page
Reply Sun 9 Jul, 2006 01:53 am
The camaro vs mustang test has been going on forever.

But i personally think that the CAMARO RULES


you make me wanna vote for a gremlin..

There was no '64 Mustang. While introduced in late April of '64, the Mustang, developed on the Falcon platform, debuted as '65 model. Initially, there were 2 versions, a hardtop and a convertible, with a 2+2 fastback coming along a few months after its older siblings hit the market. The notion that the Mustang was the first of what became known as "Pony Cars" - sporty compacts - is erroneous; the Plymouth Barracuda beat it to the showrooms by several weeks. The first Barracudas shipped under Manufacturors' Certificates of Origin - the official shipping document from which a vehicle's initial title derives - designating them as '64 models, but all Mustangs produced from introduction through early July of '65 shipped as '65s. '66 Model Year Mustangs went into production in mid-July of '65.

One my of younger sisters got a brand new '65 Mustang in June of '64, a highschool graduation present. It had a 2-speed automatic (column shift), a 170ci, 101hp I6 engine, an AM radio (Philco) with 4 preset buttons, and a dealer-installed under-dash Muntz 4-track tape player, which had one speaker in the dash and one in the rear package shelf. She drove that thing untill it all but completely rusted away, some time in the mid '80s. 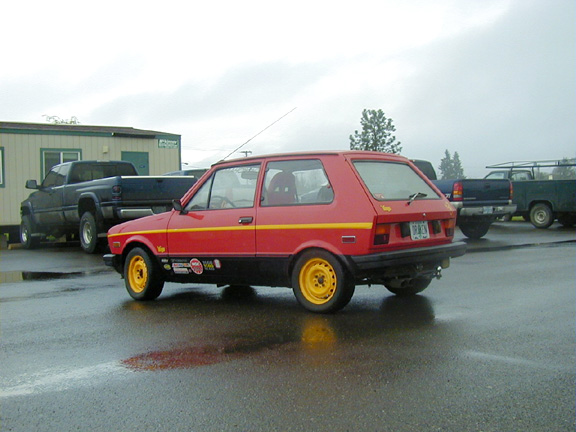 Proud owner of a 641/2 vinyl topped coupe and a 65 GT convertible here, and you are correct. Not to mention though, the mustang also ruled the road racing circuit from 63 through 74 when the Corvette was modified in earnest to overtake it. The Camaro never even placed on the road racing circuit
0 Replies
1
Reply Thu 3 May, 2007 04:12 pm
Re: Mustang Vs. Camaro

And no production Camaro ever has had more power than a Mustang..

Really? Here are a couple of examples: