Orange is the new black - in politics?

Like many of her classmates, she wore an orange armband to protest Mr. McCain's presence.

Also, "students and faculty members waved orange fliers" saying "McCain does not speak for me".

They too? What is it with orange these days? Is orange the new red?

By far the clearest claim to political fame of the colour orange, in recent times, is of course the "Orange revolution" in the Ukraine.

Students and protesting citizens camped out for weeks in the biting winter cold of Kiev to oust President Kuchma's corrupt government. They wore orange and waved orange flags - the end result, no doubt, of a very successful strategy meeting of the opposition somewhere down the road. They must have realised that the Ukrainian flag itself, used in previous protests, was a polarising and dividing symbol in a country that's demographically divided between a fiercely nationalist West and a Russian or Russified East.

So instead, there was orange, and it was a hit.

Since then, it's orange here and orange there. Orange seems almost as endemic as the face of Che Guevara.

In the former Soviet Union, Russians are now complaining about so-called "color revolutions" sweeping its "near abroad".

In Germany, the new trade-unionist opposition party that emerged two or three years ago in protest against Chancellor's Schroeder's labour market reforms, the Electoral Alternative Labour and Social Justice (now part of the Left Party), brandished orange too - rather than risking the red flag of, well, a red flag.

In Holland, when the main trade union FNV in 2004 swiftly mobilised the largest popular demonstration in over two decades in response to the government's proposed cuts in early retirement, it ditched its traditional red in favour of a new, fresh orange as well.

In Hungary, the populist-conservative oppositional Fidesz party tweaked its traditional orange/blue logos and opted, in this year's elections, to campaign with purely orange. Their trademark orange circle appeared - often without any words, as a stand-alone symbol - all over the country.

As a Dutchman, subject of the royal "House of Orange", I can only be appreciative of this belated embrace of our national colour, of course. But what is up with this?

Any of you know of other recent instances of political groups or movements adopting the colour orange as some kind of insurrectionist symbol?
Type: Discussion • Score: 1 • Views: 3,011 • Replies: 11
No top replies
2
Reply Sun 21 May, 2006 03:54 pm
It won't play in Ireland.


It gets used here as a colour denoting anti racism, beginning during the rise of the horrible One Nation party.
0 Replies
1
Reply Sun 21 May, 2006 04:58 pm

It won't play in Ireland.

0 Replies
2
Reply Sun 21 May, 2006 09:25 pm
The settler withdrawal protesters in Israel also used orange, but they can hardly be called leftists. 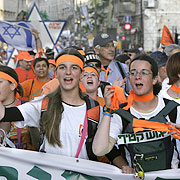 I think it more generally symbolizes "the people," or "the street;" something along the lines of a mass appeal movement, more populist, than something strictly leftist.
0 Replies
1
Reply Mon 22 May, 2006 02:47 am
InfraBlue wrote:

The settler withdrawal protesters in Israel also used orange, but they can hardly be called leftists.

Interesting! Was orange used before, in Israel, by a political group, or was this newly coined?

And yeah, no - its definitely not necessarily been a leftist thing! I mean, the Ukrainian revolution, for one, arguably was not a left-wing one (though not necessarily a right-wing one either); and I already mentioned the conservative-populist Fidesz here in Hungary as another example.
0 Replies
1
Reply Mon 22 May, 2006 10:20 am
Orange traffic cones = Reconstruction ahead.
0 Replies
1
Reply Wed 31 May, 2006 11:38 pm
Buddist ( or Confusian ? ) monks
have been using orange wrappings for a while
0 Replies
2
Reply Wed 31 May, 2006 11:55 pm
"Neue Zürcher Zeitung" by the culture historian Thomas Macho
- Colour as sign in polotics (in German
0 Replies
0
Reply Thu 1 Jun, 2006 12:06 am
Walter Hinteler wrote:

The US "Color Marketing Group" called orange, btw, as a "hybrid color" "Ignorange" in their latest coöour-trend prognoses.

It is a symbol of the Ukrainian Orange Revolution of 2004. The orange color denotes the color of the opposition party of Viktor Yushchenko.

In Israel, orange ribbons indicate opposition to the Israel "disengagement" plan of 2004, as opposed to blue ribbons, which indicate support. The color was adopted by disengagement opponents on advice from Adir Zik. Although the disengagement was executed in 2005, supporters continue to use the color as a symbol of general opposition to further withdrawals. It is also used as a persistent reminder of their continued opposition to the actions of the government in surrendering territory to the PLO, Hamas, and Hezbollah and of expelling Jews in general, or inhibiting their expansion, especially in Judea and Samaria.

Often written on the post-Disengagement ribbons is the phrase "לא נשכח ולא נסלח", "we will not forget and we will not forgive") as a symbol of their desire to bring to justice those who took part in their expulsion and dispossession and of their demand that the Israeli government restore the expelled Jews to the lands from which they were expelled.
In Australia, orange ribbons are worn on Fridays in support of the release of Australian citizen David Hicks who has been detained in Guantanamo Bay for 5 years without charge. It was originally an initiative called 'Orange Fridays' and is now supported by Amnesty International which demands that David Hicks be returned to Australia to face a fair trial or be released.

In Canada, orange ribbons are worn to support the New Democratic Party candidate Nicolas R. Thibodeau in Mount Royal. The Orange Ribbon Foundation concern is to support Integrity, Democracy, Equality, Environment and Security in the political ring. The campaign was launched on January 23rd 2007 when he was reinvestited a year after his first attempt to represent Mount royal constituents. [1]

An orange ribbon or orange-and-white ribbon is an awareness ribbon for Self Injury Awareness Day (SIAD) (March 1). SIAD promotes awareness and support of those people who self harm. They were formerly coloured red, blue and black.

The orange ribbon is worn as a symbol representing World Harmony Day.

At county and state fairs in the United States, an orange ribbon is awarded to the competitor finishing in sixth place in a contest.