I wish both you guys would relax a bit - you're both nice guys with interesting opinions to offer on a variety of subjects.
Cycloptichorn

I was just thinking the same thing that I need to take a breath and relax, and maybe do something else the rest of today. I was noticing I was making more typos and have had to go back and edit my posts. I confess that this subject touches me in a serious way. I believe anyone that has ever been in the military would understand why these things are important to us, and when we perceive some public figure like Kerry has lied and rendered an insult upon his own country, we do not take it lightly. At least I do not. Being a false witness is not only obviously low down, but the Bible teaches us that it is one of the things that God hates. And so I not only took offense with Kerry, but I take offense at posters here on this forum that commonly take the side of blaming America for virtually anything and everything that are bad in the world. We don't have to give a pass to this country regarding anything, but seriously, can't we have a more balanced view of the world and be able to apply more historical context to all of this stuff? I think we can and should.
3 Replies
1
Reply Tue 31 May, 2011 11:13 am
@okie,
You have to remember, when you criticize a demonrat then you going to be demonized. Lefties don't get angry when you lie about them, they get angry when you tell the truth about them. You can always know you're right when they attack you personally. They lose and you win.
2 Replies
1
Reply Tue 31 May, 2011 11:54 am
@Renaldo Dubois,
Oh! Is that so. Show us by cut and paste where that has happened?
1 Reply
0
Reply Tue 31 May, 2011 12:03 pm
@okie,
That is as chickenshit a post as you have ever posted, Okie. If you have a problem with something I post then it is incumbent upon you to address it at that time and location. Nothing I have ever posted has been untrue; that's why you take this cowardly tack.
0 Replies
1
Reply Tue 31 May, 2011 12:06 pm
@okie,
So okie, didn't you learn the lesson from the bible, "judge not?" That's the purview of god, and god alone.

You have to remember, when you criticize a demonrat then you going to be demonized.

Day to day basis with full awareness of officers at all levels of command? They must have been in a different country than I was, JTT.

I remember seeing on the News a platoon of US soldiers dragging an alleged terrorist along the ground behind a vehicle with a rope tied to one leg. It didn't say whether he was dead or not.

Oh! Is that so. Show us by cut and paste where that has happened?

Don't bother RD. Just go to the evolution threads. It's all ci. ever does on there.
1 Reply
1
Reply Tue 31 May, 2011 12:30 pm
@spendius,
You mean like you who never provides evidence for your claims on most subjects; just tangents and irrelevance.
1 Reply
2
Reply Tue 31 May, 2011 12:36 pm
@cicerone imposter,
I'm not providing evidence that the trains are running and the lights are on, you silly moo.

Being a false witness is not only obviously low down, but the Bible teaches us that it is one of the things that God hates.

And even with that, you continue with your lies, Okie, with you pathetic attempts to divert attention away from one of the worst war crimes of last century.

These atrocities were much more than the My Lais. They were part and parcel of the overall US plan which was to destroy what the US knew was the real power in the south and it certainly wasn't the US puppet governments.

Since the people overwhelmingly supported the non US leaders, the US targeted civilian populations. That's a huge war crime, Okie. That was atrocities on a massive scale.

The Overall U.S. Assault as the Primary Bloodbath

In a very real sense the overall U.S. effort in South Vietnam may be regarded as a deliberately imposed bloodbath. Military escalation was undertaken to offset the well understood lack of any significant social and political base for the elite military faction supported by the United States.

Despite occasional expressions of interest in the welfare and free choice of the South Vietnamese, the documents made available as part of the Pentagon Papers show that U.S. planners consistently regarded the impact of their decisions on the Vietnamese at most as a peripheral issue, more commonly as totally inconsequential.

Nonintervention and an NLF takeover were unacceptable for reasons that had nothing to do with Vietnamese interests, they were based on an assumed adverse effect on our material and strategic interests.

Operation Speedy Express was only one of a great many major pacification efforts carried out by the U.S. command. It is unusual, apparently, only in that it was studied and reported by a competent and experienced correspondent, Kevin P. Buckley of Newsweek. He examined the military and hospital records of the Operation and interviewed South Vietnamese inhabitants and pacification officials of the Mekong Delta province of Kien Hoa, the site of Speedy Express. In the latter part of 1968 the American command launched an "accelerated pacification program" to wrest territory from the NLF and place it back under the "control" of Saigon. "Operation Speedy Express" was the code name for a six-month campaign by the U.S. Ninth Infantry Division under that program. The campaign was carried out in a heavily populated Delta province that had traditionally supported the NLF. Buckley reported [142]:

All the evidence I gathered pointed to a clear conclusion: a staggering number of noncombatant civilians - perhaps as many as 5,000 according to one official - were killed by U.S. fire power to "pacify" Kien Hoa. The death toll there made the My Lai massacre look trifling by comparison... The Ninth Division put all it had into the operation. Eight thousand infantrymen scoured the heavily populated countryside, but contact with the elusive enemy was rare. Thus, in its pursuit of pacification, the division relied heavily on its 50 artillery pieces, 50 helicopters (many armed with rockets and mini-guns) and the deadly support lent by the Air Force. There were 3,381 tactical air strikes by tighter bombers during "Speedy Express"... "Death is our business and business is good," was the slogan painted on one helicopter unit's quarters during the operation. And so it was. Cumulative statistics for "Speedy Express" show that 10,899 "enemy" were killed. In the month of March alone, "over 3,000 enemy troops were killed... which is the largest monthly total for any American division in the Vietnam war," said the division's official magazine. when asked to account for the enormous body counts, a division senior ofticer explained that helicopter crews often caught unarmed "enemy" in open fields. But Vietnamese repeatedly told me that those "enemy" were farmers gunned down while they worked in their rice tields... There is overwhelming evidence that virtually all the Viet Cong were well armed. Simple civilians were, of course, not armed. And the enormous discrepancy between the body count [i.e 11,000] and the number of captured weapons [i.e 748] is hard to explain - except by the conclusion that many victims were unarmed innocent civilians... The people who still live in pacified Kien Hoa all have vivid recollections of the devastation that American firepower brought to their lives in early 1969. Virtually every person to whom I spoke had suftered in some way. "There were 5,000 people in our village before 1969, but there were none in 1970," one village elder told me. "The Americans destroyed every house with artillery, air strikes, or by burning them down with cigarette lighters. About 100 people were killed by bombing, others were wounded and others became refugees. Many were children killed by concussion from the bombs which their small bodies could not withstand, even if they were hiding underground." Other officials, including the village police chief, corroborated the man's testimony. I could not, of course, reach every village. But in each of the many places where I went, the testimony was the same: 100 killed here, 200 killed there. One old man summed up all the stories: "The Americans killed some VC but only a small number. But of civilians, there were a large number killed"
Although Buckley states that pacification chief John Paul Vann found that Speedy Express had alienated the population (a profound discovery), he reports that the Army command considered its work well done. After all, "the 'land rush' succeeded. Government troops moved into the ravaged countryside in the wake of the bombardments, set up outposts and established Saigon's dominance of Kien Hoa." The commander of the unit responsible for this achievement was promoted with an accolade from General Abrams, who felt that "the performance of this division has been magnificent." On another occasion, when awarding him the Legion of Merit, Abrams referred to George Patton III, the man most noted for converting "pacification" into plain killing, as "one of my finest young commanders." [143]

0 Replies
0
Reply Tue 31 May, 2011 12:40 pm
@Cycloptichorn,
Yeah, you guys. This is getting a little too uncomfortable for Cycloptichorn.

I know, let's talk about Obama's trip to Europe.
1 Reply
1
Reply Tue 31 May, 2011 12:48 pm
@spendius,
There's nothing to look at! Your posts have no basis in fact or reason.
1 Reply
2
Reply Tue 31 May, 2011 12:52 pm
@JTT,
It had some amazing bits. The non-joke about the Pope, the ex-President of the US and the Archbishop of Canterbury was the highlight. I daresay there were moments sprawled in an armchair thinking "whose sodding idea was it to run for office?"

The general opinion here is that he will blow away any of the GOP hopefuls we have so far seen. Maybe Bob Dylan could give him a contest. He knows more real economics than the IMF, the G8, and Wall Street put together.
0 Replies
2
Reply Tue 31 May, 2011 12:54 pm
@cicerone imposter,
Quote:

There's nothing to look at! Your posts have no basis in fact or reason. 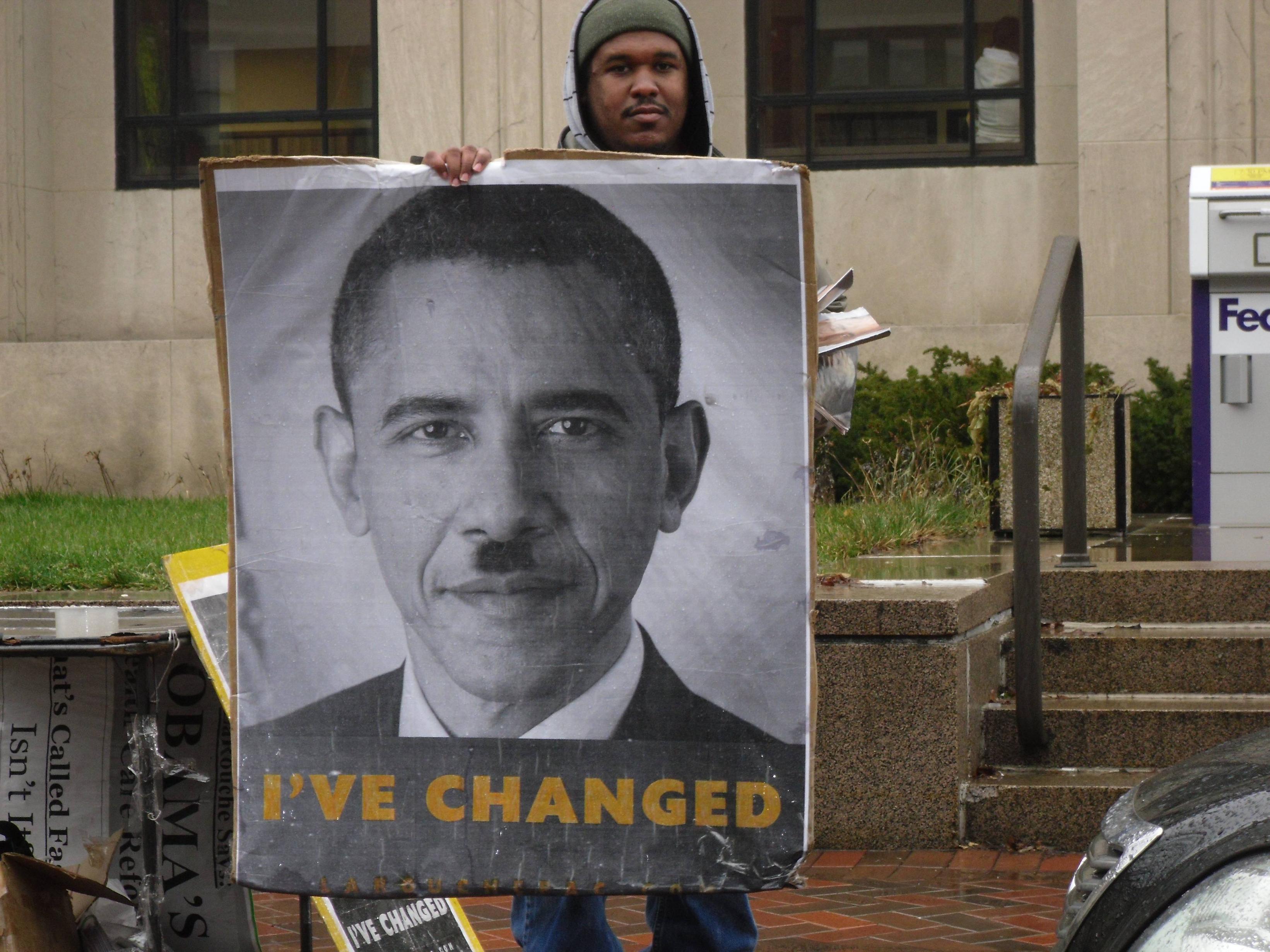