Forums: North America, History, Germany, Usa, England
Email this Topic • Print this Page
Reply Mon 19 Sep, 2005 06:18 pm
I have long liked cemeteries. Maybe that's because I grew up so close to spooky old Salem with the tales of witch burnings still lingering on autumn breezes. Maybe it's because I lived so close to a large cemetery as a child. In any case some of the best cemeteries I've ever seen are here in the Boston area. The older tombstones you can find here are exquisite and at times odd.

As a teenager I'd visit the little cemeteries in little towns around Acton, MA, where I grew up. In the town of Harvard, there is an old Quaker (or is it Shaker?) cemetery in the woods by a traditional Quaker/Shaker home. The graves are marked by little, both thing and short, stakes which held aloft oval plackards with information about the deceased offered. All the grave markers were the same except for the info. They were perfectly rowed at one time, now they were slightly askew. Tall tall pines crowded the little graveyard one the other side of a tumbling stone wall.

In college I used to, um, do college type drugs, and then go run around in a big NH cemetery with friends. Sometimes playing hide and seek with hearts pounding.

After college, in Georgia, I used to hike along the buffering woodlands which surrounded various power cuts. One such trip lead me through a springy-earthed forest, under and over spider webs which housed emerald green orb-weavers and to the oddest cemetery of all. A tiny little lot edged by a waist-high stone wall that ran maybe 15x10 feet. There was no threshold through which to enter. But, inside were grave stones. It was surrounded (sometimes closely) by tall trees, no road lead there, only the weakest of footpaths lead to it. I pondered on who those people were. Was it the graveyard of a slave family? Was it an old farm family?

And, in Italy I visited the graveyard which serviced the 2 small villages where my ancestors came from. Familiar names adorned flat, horizontal (rather than our commonly verticle stones) markers. Many had photos under domed glass or metal detailing. It was a very small cemetery and very crowded by American standards.

But, back to the Boston area for the ultimate cemeteries. Mount Auburn ( LINK ) and Forest Hills ( LINK ) Cemeteries were established in the early 1800s, designed as parks and arboreatums as much as they were graveyards. They are places of beauty, with adult specimen trees and shrubs, wild flowers, woodlands and fields, lakes and ponds, roads and footpaths and even art exhibitions. They are both truely extraordinary places.
Type: Discussion • Score: 5 • Views: 10,106 • Replies: 95
No top replies
1
Reply Mon 19 Sep, 2005 06:41 pm
Mount Auburn Cemetery was built stradling the line between Cambridge and Watertown, MA. After a push for a new type of burial space by Jacob Bigelow, the brand spanking new Massachusetts Horticultural Society built the cemetery in 1831 using designs by Henry A. S. Dearborn. Now it is 175 acres and many famous historical figures are intered here. A great website from the national park service is here LINK

Forest Hills Cemetery was also designed by Henry A. S. Dearborn, then Roxbury's mayor, in 1848. It was Boston's first public park, with 250 acres, preceding the development of Boston's Emerald Necklace by 30 years. Among those buried there is e. e. cummings. There are many area artists and political activists.
0 Replies
1
Reply Mon 19 Sep, 2005 06:48 pm
And, how could I have forgotten to add the the list of groovy graveyards, the one in Salem, itself. We had one early abuzz gathering in Salem and we visited the graveyard there. Some pics of the Salem graveyard:

0 Replies
1
Reply Mon 19 Sep, 2005 06:54 pm
Not especially celebrated, but I was facinated by wandering around and reading headstones in the cemetary outside of Magdelena, NM, kind of towards the old Kelly mine.

Also, Boot Hill at Tombstone in the late 60s. I understand they've built a new one that's supposed to be much cuter. You should ask Diane about that.
0 Replies
1
Reply Mon 19 Sep, 2005 07:01 pm
A cuter cemetery?

The SW graveyards are weird for me. I'm used to rolling green lawns, big trees, detailed carvings, architecture, wrought iron........ the graveyards I saw out West were dry (of course), small, surrounded by wire fencing, had plain stones..... The yard in or near Galisteo looked interesting, but I never went in. 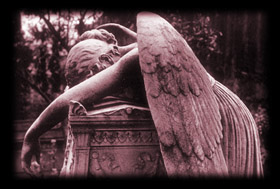 Couldn't find anything on the Guadalupe cemetery, not surprised.
Will be back with dates on the Protestant cemetary and the Ferndale one.
0 Replies
1
Reply Mon 19 Sep, 2005 07:42 pm
Cool.....
0 Replies
1
Reply Mon 19 Sep, 2005 07:46 pm
Ah, the Protestant Cemetery was set aside in 1738; the Ferndale one in 1866. There are a lot of websites on the P. Cemetery because of Keat's grave.
0 Replies
1
Reply Mon 19 Sep, 2005 07:52 pm
Great thread, Li'lK. Eugene O'Neill is also buried at Forest Hills. One of my faves in the Boston area is Gethsemane Cemetery in West Roxbury. One reason is that my parents and some other dear old friends are buried there; but that's not the only reason. For one thing, the cemetary is on the site of what was once Brook Farm, the Utopian community established there by Emerson, Hawthorne and other 19th Century Transcendentalists. That part of the cemetary which still has some remains of the old Brook Farm buildings has been designated a National Historic Site. For another thing, the graveyard is totally non-sectarian; it will accept funerals of any or no religious affiliation. But it sits right across the road from St. Joseph's Cemetery which is strictly Catholic and is cheek-by-jowl with a Jewish burial ground, the name of which I've forgotten.

Boot Hill in Tombstone is still there, same place as always. But most of the grave-markers have been either replaced or obviously spruced up. They were all mostly plaques anyway. I was there last Summer (2004) after an absence of about a dozen years and was glad to see that the new brochures call attention to the fact that there is an entire Jewish section to Boot Hill. Apparently, during the hey-day of the 1880s when Wyatt Earp and Doc Holliday stalked the streets of Tombstone there was a sizeable Jewish community in the mining town. Also, several Chinese families judging from some of the names on the grave markers.

Wyatt Earp, incidentally, became the common-law husband of a Jewish woman. Although he never converted to Judaism as far as is known, he is buried in the old Jewish Cemetery in San Francisco, next to his wife.
0 Replies
1
Reply Mon 19 Sep, 2005 07:54 pm
http://englishhistory.net/keats/morepics.html
http://www.oldcitycemetery.com/
0 Replies
1
Reply Mon 19 Sep, 2005 07:55 pm
one of the most unusual cemeteries - or lack thereof - is on smith island, virginia, a small island in chesapeake bay.
since the island can get flooded easily - it's only a few inches above sea level -, families have their own cemeteries in the frontyards of their houses.
they are like large stone-coffins above ground.
signs are posted, asking visitors to respect their privacy and to refrain from photographing the burial sites. hbg
0 Replies
1
Reply Mon 19 Sep, 2005 08:07 pm
mmm, I liked that english history site.

I wouldn't read this just before bedtime, if I were thee!

"Two seemingly unconnected incidents occurred within weeks of one another in early 1967. The first involved two 16 year old convent girls who were walking home at night after having visited friends in Highgate Village. Their return journey took them down Swains Lane past the cemetery. They could not believe their eyes as they passed the graveyards north gate at the top of the lane.............................."

<What is that scratching noise on the window?....and why is the back door slightly ajar?>

I hope you didn't do any dead heading while you were lurking.
0 Replies
1
Reply Tue 20 Sep, 2005 03:17 pm
Back in college days, I lived for a while across the street from the cemetery in Johnson City, NY (upstate). One night, I was reading "The Family" by Ed Sanders, all about the Mansons, and I also noticed a news item about an incident that occurred in the cemetery across the street.

It seems some grave robbers had been at work, and they were taking body parts, not jewelry. I still recall a quote from a local detective about the investigation: "We've been to some strange places to talk with strange people with strange ideas, if you know what I mean."

Scared the bejesus out of me!
0 Replies
1
Reply Tue 20 Sep, 2005 03:30 pm
There's nothing especially interesting about St. Patrick's cemetery in
Stoneham, but that's the ground I'll be under someday.

After we bought our plot, I made point of visiting it and performing a
rather clumsy Irish jig just so I could dance on my own grave.

Years ago on a family vacation, my father and brother slunk out of sight while my mother, sister and I deadheaded a sizable planting of marigolds in the Gettysburg National Park.

Of course all gardners in the world are descended from Cain. Abel had no issue and Seth had no interest in horticulture and didn't want to be conspicuous.
0 Replies
1
Reply Tue 20 Sep, 2005 03:40 pm
I rode the White Pass & Yukon RR out of Skagway past Skagway's Gold
Rush Cemetery. One of the tombstones there is of Frank Reid who shot
notorious badman Soapy Smith and was killed himself in the battle. His
tombstone bears the legend "He gave his life for the honor of Skagway."

They say there is also a tombstone of a celebrated Lady of Ill-Repute that
bears the inscription "She gave her honor for the life of Skagway".
0 Replies