About the George Floyd murder trial

Chauvin was found guilty on all three murder charges and one of them was for accidental death.

I was going to ask why did Chauvin refuse to testify in court. What COULD he say in his defense?

Whether Chauvin lied on Floyd's shoulder or neck, or whether Floyd died due to heart issues and an excess of drugs in his system or not is immaterial; Chauvin knelt on top of Floyd and Floyd died a few minutes shortly after that. Chauvin SHOULD have listened to Floyd when Floyd told him REPEATEDLY he couldn't breathe and gotten off of Floyd. Chauvin had to be held accountable for what happened.

A few people I know want to argue that Chauvin was "innocent". How could he be "innocent"?

I noticed it was Whites who wanted to argue this. Why?

Too many White cops have gotten away with killing too many unarmed African Americans. Statistically there are more Whites than African Americans who have been killed by cops, but I don't know how many Whites who were killed were unarmed.

If it's less than the number of unarmed African Americans who were killed it's unfair. Cops SHOULD NOT BE KILLING ANY UNARMED PEOPLE.

I am glad Chauvin is in jail. When I found out the verdict of the trial I was jumping up and down for joy. That's an answered prayer.

What are your thoughts about the trial? How do you feel about it?

I can only imagine he did not want to be cross examined by the prosecution.

Chauvin was found guilty, and there will always be people who disagree with that, again you’ll have to ask them.

Your comment about more white people than black people being killed by the police is meaningless, it needs more context.

White people make up a greater percentage of the population than black people so they should score higher in all manner of studies because there are more of them.

What you need to look at is the amount of black people who are victims of police brutality as a proportion of the population.

If white people make up 70% of the population, black people 20% and other groups 10% one would expect, all things being equal, that they would account for 20% of the victims, they don’t.
0 Replies
2
Reply Mon 3 May, 2021 04:47 pm
I found this table that shows how many people (including unarmed people) were shot & killed by police, broken down by year.

I'm presuming many of those were white people. 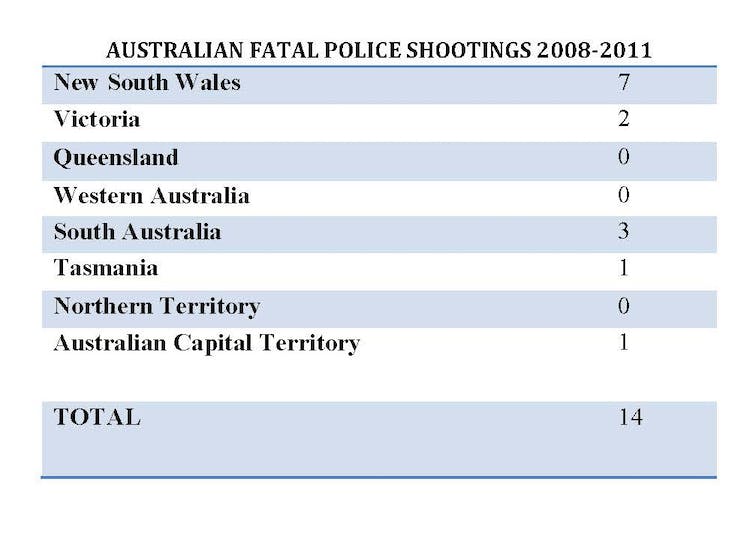 That was over three years, while single year figures in the US are around the 900 mark (see my previous post for link).

When read in conjunction with the Wikipedia stats on officers killed in the line of duty, we see that the situation in the US is much, much more dangerous for US police than Australian Police.

When any group is faced with increased danger (from other people), it is usually more aggressive. The greater the increase in danger faced, the more aggerssion that is shown. This isn't justification - this is an observation of human behaviour across all sectors of humanity (going way beyond just police, to encompass most groupings in humanity). There is no point saying that police (or any group) shouldn't be human - everyone is human, and every group has the same human failings. Just saying to a group (any group) 'it isn't acceptable' never stopped human failings from existing, anywhere. Just education (without addressing the contributing circumstances) only reduces the instances, without stopping them. My point being that to properly address the matter, there needs to be a wholistic response to the issues that cause the increased aggression - as well as better oversight.

Chauvin should have been found guilty. He may also be a product of his environment (which again, is not justification, but recognition that the environment may shape people). Failing to recognise or acknowledge contributing circumstances, and addressing those, is perhaps the main reason many issues keep repeating themselves.
0 Replies