Does Donald Trump care about (anyone) other than himself?

But seriously (not that the above is untrue), he's a complete narcissist, and always has been, well before he even got elected to begin with.
2 Replies
-1
Reply Wed 10 Jun, 2020 12:43 pm
@Real Music,
Well, I think it's kind of hard to tell, but even in his marriage there are lacks.
I will leave a youtube video, where there are few scenes where you can see that even in his private life, there is nothing good.
https://www.youtube.com/watch?v=aHnSSZesoB0
0 Replies
1
Reply Wed 10 Jun, 2020 04:28 pm
@Real Music,
Donald Trump cares about this country and its citizens. His policies show it and he undeniably shows it.
0 Replies
1
Reply Wed 10 Jun, 2020 04:30 pm
@justaguy2,
Quote:

But seriously (not that the above is untrue), he's a complete narcissist, and always has been, well before he even got elected to begin with.

CNN's Anderson Cooper examines President Trump's visit to the hospital
treating victims of the mass shooting in El Paso, Texas, which killed at least 22
and injured more than two dozen others.

Rep. Gregory Meeks (D-NY) tells CNN's Wolf Blitzer he thinks President Donald Trump
does not care about the United States, and only cares about himself.

So it'll be interesting to see if America is prepared to keep putting up with a complete narcissist as their president...

it'll come down to personalities,


Trump’s “Art of the Deal” co-author Tony Schwartz argues “anything goes”
for “psychopath” President Trump, and believes Trump will not leave the White House
if he loses the election because giving up is “unthinkable” for him. 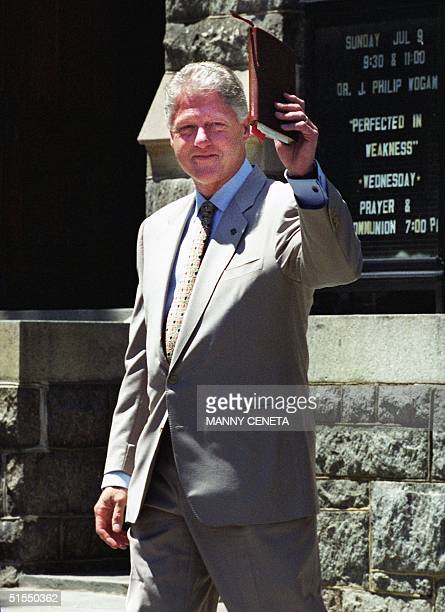 1 Reply
-1
Reply Thu 11 Jun, 2020 09:00 pm
@coldjoint,
1. That's simply a random picture of Bill Clinton.
2. It appears to just be a random picture without any type of context.
3. Unless there is some particular controversy or story behind the picture, then I don't see anything wrong with the picture.

4. Now Donald Trump, on the other hand, used military force to disperse the protestors for the
sole purpose of creating a photo-op.

4. Now Trump, on the other hand, used military force to disperse the protestors for the
sole purpose of creating a photo-op.

The perimeter was being moved, the people were warned three times, they were throwing things at the cops. It was going to be done whether or not Trump took that walk.

The AG explained it all in a video I posted. I believe him not the whining divisive media or the useful idiots posting their garbage.
1 Reply
-1
Reply Thu 11 Jun, 2020 09:22 pm
@coldjoint,
1. You can try and justify and rationalize Donald Trump's immoral bad behavior.

2. Nothing changes the fact that this disgusting immoral behavior was done for the sole purpose of staging a phot-op.

3. Donald Trump has rightfully been denounced, criticized, and rejected for his immoral act.

1. You can try and justify and rationalize Donald Trump's immoral bad behavior.

I am doing neither

disgusting immoral behavior was done for the sole purpose of staging a phot-op.

What was immoral about his behavior? Be specific.

and rejected for his immoral act.

. Donald Trump truly is a horrible despicable and immoral person.

I disagree. He is man who gets things done.

0 Replies
1
Reply Fri 12 Jun, 2020 12:46 am
@Real Music,
They won't have to haul him out, he just will not be sworn in for a second term if he loses.....Secret Service disappears, employees disappear, everybody working for the Trump administration will no longer get paid........

It doesn't matter if he doesn't want to leave, sitting in the Oval Office doesn't make him president...taking the oath does. The next president will simply pick his cabinet and they will move into the offices....the football gets transferred, every special gadget in the Oval Office exists in other places....so it's really not a problem.
1 Reply
1
Reply Fri 12 Jun, 2020 12:47 am
He cares about Putin, though...
2 Replies