Forums: History, Mexico, Hyseria
Email this Topic • Print this Page
Reply Tue 5 May, 2020 01:57 pm
Happy Cinco de Mayo--people always say this is the Mexican national holiday. I don't know how enthusiastic the folks south of the border are for this holiday, but it doesn't commemorate Mexican independence. The Army of the Reform had definitively defeated the conservatives in 1859. Conservative representatives had already been in Europe for many years, hoping to recruit a king or emperor. Meanwhile, both Napoleon III and Lord Palmerston had been looking for ways to take advantage of the American civil war. Napoleon convinced Palmerston that they should seize the customs house at Veracruz, because the reformist government of Juarez had repudiated conservative debts. This was an old trick for Palmerston, who had bullied smaller nations for many years with the threat of the navy. But the Mexican conservatives had gotten an Austrian archduke, Maximilian, to agree to be the Mexican emperor, if they could get backing. Napoleon III came up with French troops, as well as some Belgians. When Palmerston learned of the French invasion plan, though, he pulled out of the whole business.

On May 5, 1862, the French arrogantly ignored the Army of the Reform, and were marching on Ciudad de Mexico (Mexico City), and attempted to pass through the city of Puebla. Although almost everyone in the world considered the French army to be the most modern and efficient army in Europe, the Mexicans handed them an humiliating defeat. (Obviously, no one was paying attention to the more than 2,000,000 Americans under arms in the American civil war--even though the U.S. Navy had taken agents off the rebel government off a Royal Mail Ship, giving Palmerston a taste of his own medicine. The imperial adventure in Mexico collapsed after April, 1865, when Grant sent a modest army to Texas.)

Benito Juarez declared a national holiday to celebrate the Cinco de Mayo victory at Puebla, which is the origin of the holiday. I highly recommend Maximilian and Juarez, Jasper Ridley, 1992, Ticknor & Fields, Boston.

Eric Jackson
16 mins ·
Cinco de Mayo means something different in Panama than in Mexico or among Mexican-Americans.

HERE, it is to honor our firefighters on the anniversary of the May 5, 1914 "El Poverín" explosion, more or less where the Hospital Sana Fe now is in Panama City. As in the bomberos were putting out a fire in a row of mostly wooden buildings and did not know of an illegal fireworks factory, which exploded and killed six of the firefighter and wounded a bunch of others.
0 Replies
2
Reply Tue 5 May, 2020 03:51 pm
@Setanta, 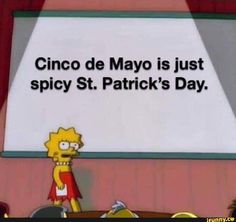 Actually there is something to that.

Both of these holidays are important immigrant holidays.