I would rather not see what is left when God is done judging you.
Little of value would be left...

I don't know I think God appreciates honesty.
1 Reply
1
Reply Sat 11 May, 2019 06:27 pm
@coldjoint,
Your perception of honesty is warped and deluded by your obsession with your political president crook.

You are dishonest with yourself and this lie obstructs your ability to reason beyond the boundaries of those who set your agenda.

You parrot what your party says without even engaging your own mind and heart as to whether if what you are doing and saying is actually ethical or true.

God is not stupid and neither are those who see through your charade. The fool here is you, no one else is fooled by your corrupt party.

Republicans are leaving your party in droves and yet you cling to it. When will you become honest?

Your help in deposing this fraud of a president will not be needed after a while and you will be always remembered as one who didn't help when the stakes were high.

You stuck with the loser.

Your mental illness is too severe for any hope of recovery.

Your perception of honesty is warped and deluded by your obsession with your political president crook.

Love is a perception...

King James Bible
But speaking the truth in love, may grow up into him in all things,

Fake news is a perception.

Perception
per·cep·tion
/pərˈsepSH(ə)n/
noun
the ability to see, hear, or become aware of something through the senses.
"the normal limits to human perception"
the state of being or process of becoming aware of something through the senses.
"the perception of pain"
synonyms: discernment, appreciation, recognition, realization, cognizance; More
a way of regarding, understanding, or interpreting something; a mental impression.
"Hollywood's perception of the tastes of the American public"

You divert the conversation to obscure your own disgusting agenda.

Deflection is a common tactic used by liars.

I'll take your word on that. You have much more experience than I do.
1 Reply
1
Reply Tue 14 May, 2019 07:19 am
@coldjoint,
A childish response and another deflection.
0 Replies
1
Reply Tue 14 May, 2019 07:45 am
"Christian" (republican) US pastor who prayed for Obama's death and celebrated Orlando gay club massacre becomes the first person banned from Ireland
https://www.msn.com/en-us/news/world/christian-us-pastor-who-prayed-for-obamas-death-and-celebrated-orlando-gay-club-massacre-becomes-the-first-person-banned-from-ireland/ar-AABivV8

Excerpt:
In September 2016, Mr Anderson was banned from South Africa, the United Kingdom, and later deported from Botswana.

Anderson was denied entry to Canada on November 10 2017, and later banned from entering Jamaica last year.

He was banned from visiting the Netherlands this month.

I would take that to mean the opposite sides of a sphere.

Comment:
This could be interpreted in several different ways.

One is that "the east" has always, to the ancients, been associated with "truth".

So one could interpret it as our sins are forgiven to the exact same extent that we are honest with ourselves.

A second possible interpretation is as you said,

That the ancients at that point actually knew the earth was a sphere and/or they had specific locations in mind when they thought of east and west.

Perhaps China or Babylon was the east and ancient day Spain or Egypt may have represented the west. (or something like that)

So the distance, in this instance, between east and west is infinity.

Perhaps the distance between the truth and a lie is also infinity...

Religion is men telling each other what to do. It is possible to have more religions than people. So how do you measure such a thing?

We will save a bundle switching presidents too.
0 Replies
2
Reply Mon 29 Jul, 2019 05:02 pm
Antigay church sued for $1 million after failing to warn members the youth pastor was a pedophile
https://www.queerty.com/antigay-church-sued-1-million-failing-warn-members-youth-pastor-pedophile-20190729 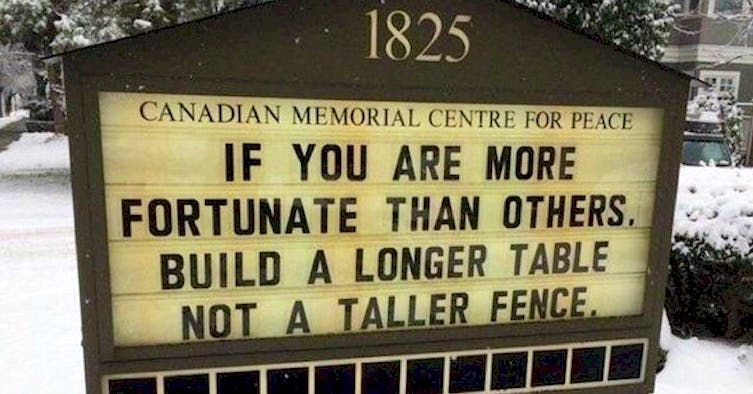 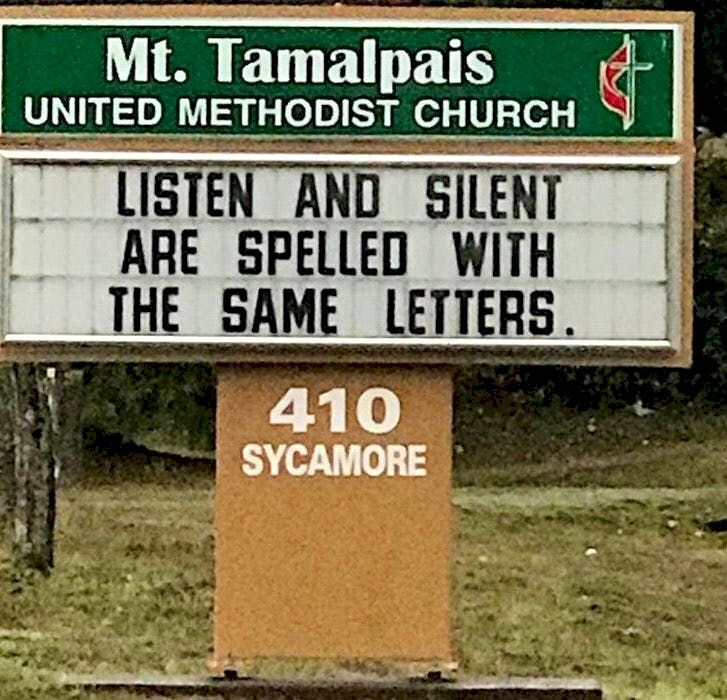 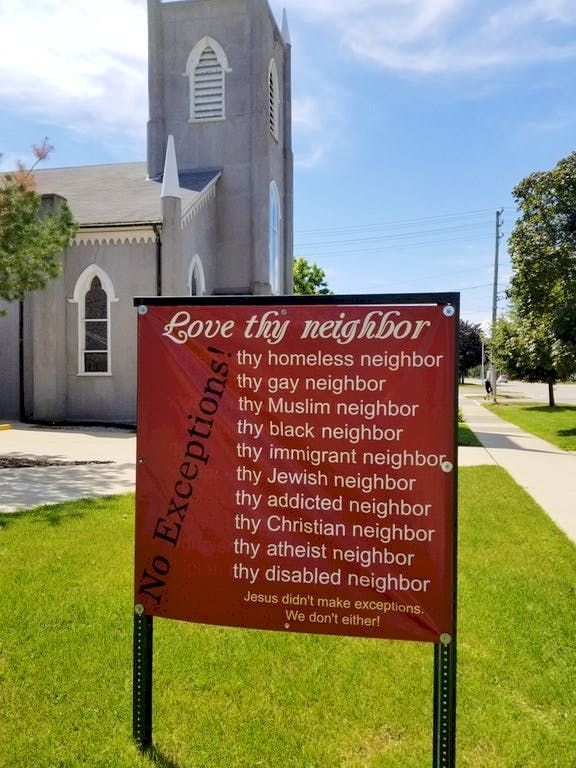 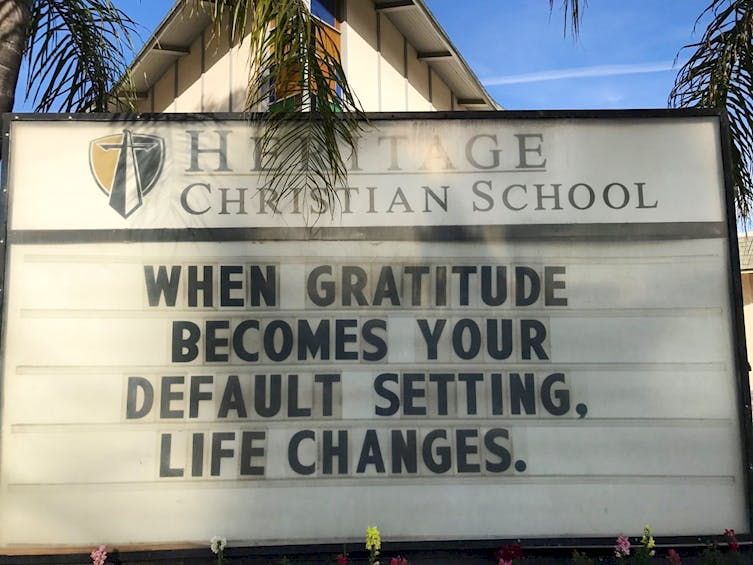 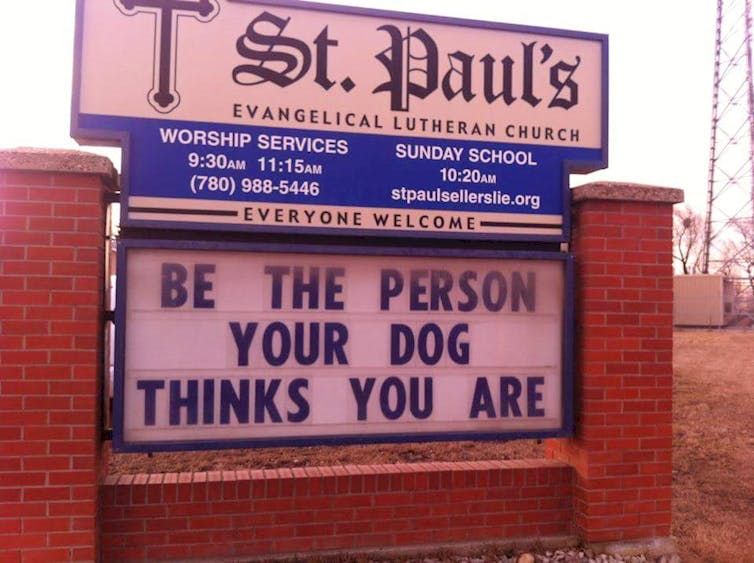 In her radio show, Dr Laura Schlesinger said that, as an observant Orthodox Jew, homosexuality is an abomination according to Leviticus 18:22, and cannot be condoned under any circumstance.

The following response is an open letter to Dr. Laura, penned by a US resident, which was posted on the Internet. It's funny, as well as informative:

Thank you for doing so much to educate people regarding God's Law. I have learned a great deal from your show, and try to share that knowledge with as many people as I can. When someone tries to defend the homosexual lifestyle, for example, I simply remind them that Leviticus 18:22 clearly states it to be an abomination ... End of debate.

I do need some advice from you, however, regarding some other elements of God's Laws and how to follow them.

1. Leviticus 25:44 states that I may possess slaves, both male and female, provided they are purchased from neighbouring nations.
A friend of mine claims that this applies to Mexicans, but not Canadians. Can you clarify? Why can't I own Canadians?

2. I would like to sell my daughter into slavery, as sanctioned in Exodus 21:7. In this day and age, what do you think would be a fair price for her?

3. I know that I am allowed no contact with a woman while she is in her period of Menstrual uncleanliness - Lev.15: 19-24.
The problem is how do I tell? I have tried asking, but most women take offence.

4. When I burn a bull on the altar as a sacrifice, I know it creates a pleasing odour for the Lord - Lev.1:9.
The problem is my neighbours. They claim the odour is not pleasing to them. Should I smite them?

5. I have a neighbour who insists on working on the Sabbath. Exodus 35:2 clearly states he should be put to death.
Am I morally obligated to kill him myself, or should I ask the police to do it?

6. A friend of mine feels that even though eating shellfish is an abomination, Lev. 11:10, it is a lesser abomination than homosexuality. I don't agree. Can you settle this? Are there 'degrees' of abomination?

7. Lev. 21:20 states that I may not approach the altar of God if I have a defect in my sight. I have to admit that I wear reading glasses. Does my vision have to be 20/20, or is there some wiggle-room here?

8. Most of my male friends get their hair trimmed, including the hair around their temples, even though this is expressly forbidden by Lev. 19:27. How should they die?

9. I know from Lev. 11:6-8 that touching the skin of a dead pig makes me unclean, but may I still play football if I wear gloves?

10. My uncle has a farm. He violates Lev.19:19 by planting two different crops in the same field, as does his wife by wearing garments made of two different kinds of thread (cotton/polyester blend). He also tends to curse and blaspheme a lot. Is it really necessary that we go to all the trouble of getting the whole town together to stone them? Lev.24:10-16. Couldn't we just burn them to death at a private family affair, like we do with people who sleep with their in-laws? (Lev. 20:14)

I know you have studied these things extensively and thus enjoy considerable expertise in such matters, so I'm confident you can help.

Thank you again for reminding us that God's word is eternal and unchanging.

James M. Kauffman, Ed.D. Professor Emeritus, Dept. Of Curriculum, Instruction, and Special Education University of Virginia
(It would be a damn shame if we couldn't own a Canadian)
2 Replies
-1
Reply Mon 13 Jan, 2020 12:15 pm
@TheCobbler,
Nice letter, but we live under man's law. It is irrelevant, or do prosecutors bring that crap up in our courts? They don't. Just more victim hood making a very old book look like the bad guy.
1 Reply
1
Reply Thu 16 Jan, 2020 06:28 am
@TheCobbler,
Moses was having a bad day when he said that. Just got carried away.

You can probably tell that my biblical apologetics were not very good.
0 Replies

How can we be sure that all religions are wrong? - Discussion by reasoning logic
What if no religions are correct, but there still is a God? - Question by neologist
We are all like little children who often say: "Mom, Dad, leave me alone, I want to be on my own". - Question by Leaffan
Beyond tribalism; How well does your religious label serve you? - Discussion by MattDavis
Is religion responsible for the opposition to peace in the Israel-Palestine conflict? - Question by maxdancona
Concern for Religious Freedom or Preaching Political Messages? - Discussion by wandeljw
Are atheists being more illogical than agnostics? - Discussion by igm
Why believe in god? The theist perspective. - Discussion by msolga
Why People Seek Solace In Gods. - Question by mark noble
Catholic remarried couples should abstain from sex - Question by Tes yeux noirs
How can a good God allow suffering - Question by SawyerMentink
Copyright © 2020 MadLab, LLC :: Terms of Service :: Privacy Policy :: Page generated in 0.04 seconds on 01/23/2020 at 04:31:09
▲ ▼