I received a leather thong for Christmas, with leopard-skin.

Forums: Waggery, Humor
Email this Topic • Print this Page
Reply Sat 1 Jan, 2005 07:47 pm
I'm quite pleased with my Christmas present, a leather thong with leopard-skin trimming. I've been wearing it all day as I do my my chores. Quite comfortable and very pleasing to the eye.

There's been a few accidents out on the road in front of my house as people drive by and see me watering the llamas clad only in my thong. The resulting collisions from the people losing concentration on the road as the marvel at my thong-clad physique has been a bit of a distraction for the poor llamas. They hear the crunching steel and breaking glass, stop chewing for a minute, and gaze toward the road. The befuddlement in the eyes of these magnificent beasts of burdens as they try to ascertain the source of the noise is truly a sight to behold.

The one for March, I'm leaning forward and flexing my muscles, like the wrestlers do when they're posing for their promotional photos. 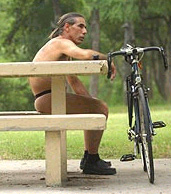 
*But the fire department informs me there is such a thing as a four-alarmer.

The one-l lama,
He's a priest.
The two-l llama,
He's a beast.
And I will bet
A silk pajama
There isn't any
Three-l lllama.*

"The thong has ended,
but the malady lingers on"

Gus, sweat and leather? not a good idea, not enclosing your nether regions anyway, you should always look after you scrotal health!