Somebody's getting their bowels stirred. Here comes the downvoters.


Funny, I am getting upvoted.

Regardless, I've had my say. I don't see the benefit of arguing further, because it always devolves into personal assaults. I don't want to get into that.


I respect that, Edgar. I wish more people would take this tact. Tara Reade marks a fitting end to the #MeToo movement.

1 Reply
2
Reply Sun 10 May, 2020 02:20 pm
@maxdancona,
You got that right, Max. Apparently women can only be believed when they agree with one's politics.
0 Replies
1
Reply Mon 18 May, 2020 11:05 am
Josie would prefer not to. Potato
@JosieOhFFS
·
10m
To dismantle rape culture we must believe women AND hold sexual predators accountable.

To dismantle rape culture we must believe women AND hold sexual predators accountable.

One without the other is nothing.


What do you do about the backlash that aims to discredit MeToo efforts by watering down real accusations with fake ones and thus trying to get people to not believe women?

You can't have a culture that paints women universally as honest and devoid of false motives without simultaneously evoking the awareness that there are some women who lie/cheat/manipulate, just as there are some men who do so.

It's like if you would assert that "all teachers are honest people," you would immediately provoke a response that would cite all the dishonesty that someone knows about some teachers.

Rape culture goes way deeper than even the culture of sexual rape. There is a culture of power that disregards the importance of consent in non-sexual arenas of life, as well as a culture of dissent that seeks power by provoking consent-seekers to the point of desperation, e.g. keeping people unemployed until they're desperate enough to apply for jobs (legal or illegal) that they otherwise would not consent to.

In short, humans (both male and female) abuse power in various ways because our brains have evolved the intelligence to do so, and not everyone resists the temptation to do wrong when they figure out how.
0 Replies
0
Reply Sun 24 May, 2020 09:44 pm
I keep seeing indicators that Me Too might indeed be dead. I hope it is just temporary.
1 Reply
-1
Reply Sun 24 May, 2020 10:50 pm
@edgarblythe,
There have been items (print and television, as well as youtube videos) for a while now saying it is dead, done and done with. It's up to the people who are victims to keep it alive. It may have to revamp or even put on a new face to return and renew its strength.
1 Reply
-1
Reply Sun 24 May, 2020 11:03 pm
@Sturgis,
If it revives with any strength it will be after the election gets finished with squelching otherwise caring individuals scruples.
1 Reply
-1
Reply Sun 24 May, 2020 11:13 pm
@edgarblythe,
To claim the #MeToo movement is a political maneuver is defeating it's entire purpose. Confronting past trauma, overcoming obstacles and preserving is truly a wonderful thing. It allows voices and experiences to be heard, shared, and commiserated with.

Regardless of where we go from here, it's been a challenge and there's still more work to be done.

The movement became more about partisan politics then about anything else. That is what killed it. 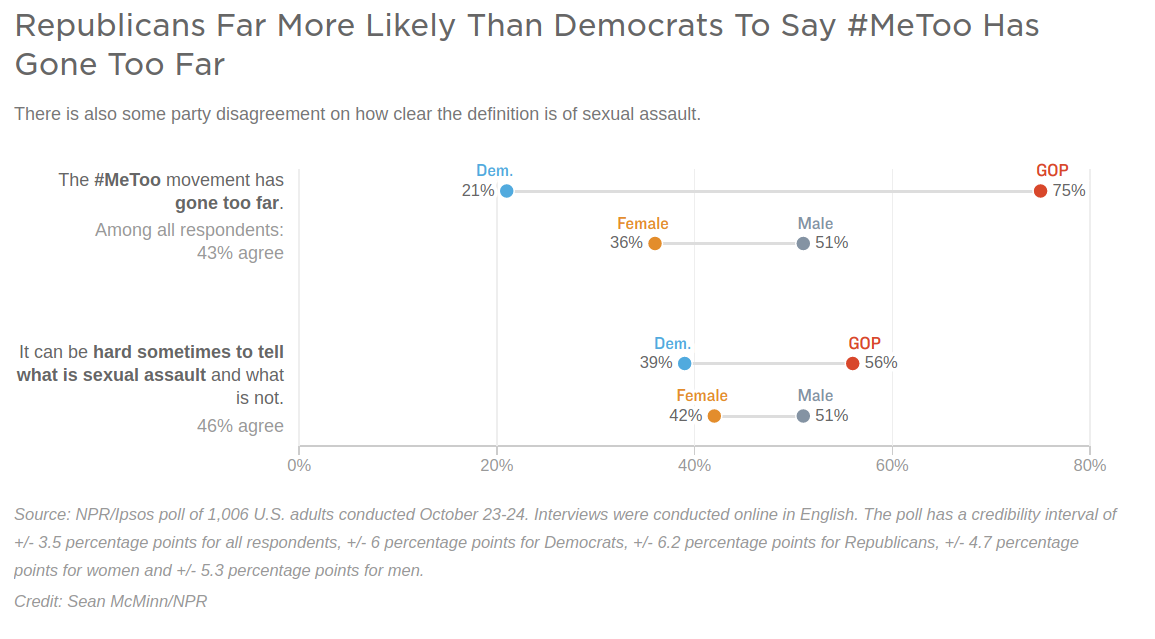 0 Replies
0
Reply Mon 25 May, 2020 08:29 am
It's not that partisan if both parties use the same arguments and tactics. With both entities the results have been the same, when push came to shove.
0 Replies
0
Reply Wed 27 May, 2020 12:16 am
Metoo is dying because #BelieveAllWomen was an obvious mistake. A mere accusation does not and should not a proof of guilt make. This was a point raised by many, including many women (often of a certain age and maturity), during the thick of the movement a couple of years back, but these voices of wisdom and caution were sadly ignored by the young generation. So now them take-no-prisonner millennial feminists are left with the following alternative: believe Tara Reade, or drop #Metoo and move on to the next hashtag.
1 Reply
0
Reply Wed 27 May, 2020 04:51 pm
California is taking legal action against everyone involved with Criminal Minds
https://news.avclub.com/california-is-taking-legal-action-against-everyone-invo-1843684706
0 Replies
1
Reply Wed 27 May, 2020 07:16 pm
It takes FOUR times to get a Judge removed.... #TimesUp https://timesupnow.org/

N.J. judge who asked rape victim about closing her legs is removed from the bench

The state Supreme Court ruled Tuesday to remove Superior Court Judge John F. Russo from the bench and bar him for judicial office due to "repeated and serious acts of misconduct." (Tanya Breen/The Asbury Park Press via AP)AP

The New Jersey judge who was previously suspended for asking an alleged rape victim if she could have closed her legs during the attack will never serve as a judge in the state again.

The decision was expected after a three-judge panel recommended in January to remove Russo from the bench for violating the Code of Judicial Conduct on at least four occasions — most prominently when he asked an alleged rape victim a series of questions that the the state’s Advisory Committee on Judicial Conduct (ACJC) described as “wholly unwarranted, discourteous and inappropriate.”

Russo began questioning a woman about her efforts to stop the alleged assault as she appeared in court in Ocean County in 2016 seeking a restraining order against the man who allegedly raped her.

"Do you know how to stop somebody from having intercourse with you?” he asked her, according to a transcript.

After the woman said “run away or try to get away,” Russo asked if there was anything else she could have done.

“Block your body parts?” Russo asked. “Close your legs? Call the police? Did you do any of those things?”

Rabner, the state’s top judge, wrote in the opinion that it would be “inconceivable” that Russo could preside over domestic violence or sexual assault matters in the future after those comments.

“No reasonable victim could have confidence in a court system were he to preside over those kinds of cases again,” the chief justice wrote.

Russo, who previously served as mayor Toms River, apologized through his attorney for the remarks during a Supreme Court disciplinary hearing in July 2019. However, Russo claims, according to the opinion, that he was trying to help a “demoralized” witness on cross-examination and “get her re-engaged in the hearing,” but the court wrote that “that explanation does not square with the record.”

“No witness, alleged victim, or litigant should be treated that way in a court of law,” Rabner wrote. ... “Judges set the tone for a courtroom. Especially when it comes to sensitive matters like domestic violence and sexual assault, that tone must be dignified, solemn, and respectful, not demeaning or sophomoric. (Russo) failed in that regard.”

An attorney representing Russo did not immediately respond to a request for comment.

The opinion outlines three other instances in which Russo’s actions as a judge showed a “pattern of misconduct and unethical behavior.”

In 2016, Russo threatened a mother in a paternity case with financial penalties when she wouldn’t disclose her address. Russo then remarked: “He’s going to find you, ma’am. We’re all going to find you.”

“(Russo’s) disturbing comments and questions were insensitive, threatening, and discourteous, and they reflected poorly on his temperament,” Rabner wrote in the court’s opinion.

In a guardianship case involving his ex-wife and their son, Russo asked a high-level court employee who worked in the same courthouse as him to help him reschedule the case in another county. The opinion said Russo “should have worked through his attorney to request that his personal matter be rescheduled.”

The final misconduct charge against Russo was for decreasing the amount a man had to pay in back child support. The judge said in court he went to high school with the man and then subsequently decreased the amount owed from $10,000 to $300 “based solely on uncorroborated financial information supplied by the defendant,” according to the opinion.

Rabner wrote that the incident, raised “doubts about Russo’s impartiality.”

The state Supreme Court wrote in their decision to remove Russo from office and bar him from future judicial positions that the four incidents “viewed together” have “lasting consequences.”

“His pattern of misconduct and unethical behavior not only undermined the integrity of different court proceedings but also impaired his integrity and the Judiciary’s,” Rabner wrote. “His overall behavior reflects a lack of probity and fitness to serve as a judge. And his conduct breached the public’s trust.”
0 Replies
1
Reply Thu 28 May, 2020 06:54 am
@Olivier5,
#MeToo died because it was co-opted by the Democrats as a weapon against Trump, and dropped like a hot potato when it applied to a Democrat.