Bernie Sanders and Elizabeth Warren in 2020

The Bern has a pretty fervent following in Toronto.

Due to the overwhelming response, the event sold out in one minute.

What the U.S. Can Learn From Canadian Health Care will be held on Oct. 29 at Convocation Hall on the downtown Toronto campus. Sanders will be in conversation with Dr. Danielle Martin, associate professor at U of T's Dalla Lana School of Public Health.

Professor Gregory Marchildon of the Dalla Lana School of Public Health, who is the Ontario Research Chair in Health Policy and System Design, will give closing remarks.

“It sold out in less than a minute. I wasn’t surprised by that in part because of his high profile during the presidential campaign for the Democratic Party.”

He said Sanders “captured many Canadians’ attention during that time” because his message was unusual compared to previous candidates and because of the values that he espoused.

For those who weren’t able to get tickets, Sanders’ talk will be livestreamed at 11 a.m. on the day of the event. For streaming details, visit the U of T Facebook page on Oct. 28.
0 Replies
1
Reply Tue 31 Oct, 2017 07:32 pm
Elizabeth Warren BRILLIANTLY Explains America's
Rich Vs. Poor Justice System

1 Reply
0
Reply Wed 1 Nov, 2017 09:18 am
@Real Music,
Well, I have to admit, I let myself get too turned off by the hype of Bernie Sanders and the "Bernie Bros" and all that stuff that went with it rather than listening to a calm rational quiet interview such as what I just listened to. Not that I am convinced the man was qualified to take on all the issues of which he seems almost dismissive of but of this main passion of bread and butter issues as he put it, I agree 100%. If he had a good running partner who was as interested in other issues, such as Biden, then that would have been super great.

I just hope in the midterms democrats and left leaning independents pick up enough seats to gain more in the house and take back the senate despite the odds so that perhaps even with Trump, maybe we could have universal health care. Maybe if the name "Obamacare" is substituted for "Trump's universal care" he would go for it.
0 Replies
2
Reply Wed 1 Nov, 2017 09:34 am
I think Ms. Warren is a wonderfully smart and effective politician. I think she is too smart and nerdy to be a good presidential candidate in the US. The fight against smart / intellectualism / knowledge in the US has gone too far. She's also a woman and that just is too hard for some generations of voters. India, Iceland, Ireland, Germany, England etc ... they can handle smart female leaders. I don't see it for the US.

Charismatic men work for the US. It may change. Maybe even in my lifetime. But smart and female? that's a hard sell.

Bring on the young, smart, charismatic candidates ... wherever they might be found. Find the 35 - 50 year old Democratic-leaning mayors/governors. Bring them up the ranks fast. Train them so they know where the skeletons are in Congress and the Senate. Get them in practice debates now. Run those candidates.

Look at Elizabeth May in Canada to see how being the smartest politician just doesn't work. Ms. May is similar to Elizabeth Warren in many ways (though further to the left), generally acknowledged as being the most knowledgeable politician we've got (by politicians from all sides) but getting nowhere ever.
2 Replies
-3
Reply Wed 1 Nov, 2017 10:42 am
The only way for Democrats to win next presidential elections is challenging president Donald Trump against Madonna. 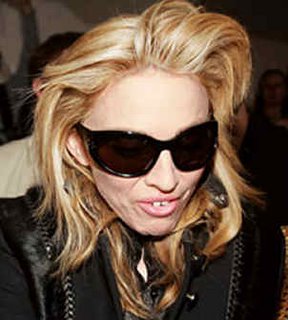 Woman accuses Sen. Franken of kissing, groping her without consent

It is like someone opened a can of worms and it is now a plague of worms or something.
0 Replies
1
Reply Thu 16 Nov, 2017 08:25 pm
"FIGHT BACK!!!" Elizabeth Warren DESTROYS
Trump in MSNBC Interview on The Rachel Maddow
Show

1 Reply
2
Reply Fri 22 Dec, 2017 06:10 pm
@Real Music,
I'd vote for anyone except "he whose name shall not be spoken". I hope we can get somebody more fluent in English next time. Maybe somebody from Mexico with a ladder, an invisible ladder for the invisible wall.
0 Replies
-2
Reply Mon 25 Dec, 2017 02:30 am
@Real Music,
The bum and Princess Moonbat Feathers