Thousands of people, including 2,000 re-enactors dressed in costume, are marking the 950th anniversary of the Battle of Hastings.

Battle Abbey, in East Sussex, widely accepted as the site of one of the most famous events in British history, is the focus for a weekend of events.

The battle, between William of Normandy and Anglo-Saxon King Harold II, ended in the latter's death.

A group of "warriors" recreating the 300-mile march made by King Harold to the battle site arrived during the morning.

They left York last month, travelling on foot and horseback and living in Saxon-style camps along the way.

Re-enactor Nigel Amos said: "In 300 miles we have seen some great countryside, met an awful lot of fantastic people and engaged with school groups.

"And we have got a feeling of what it would have felt like to have come that distance on that fateful march.

"This is a tribute to King Harold and all of the warriors of 1066 because they are what made this country."
King Harold defeated a Viking army at the Battle of Stamford Bridge in East Yorkshire, on 25 September, 1066, before travelling south to face the Normans.

On 14 October, he fought and was killed at the Battle of Hastings.

Duke William then seized the English throne.
Roy Porter, from English Heritage, described the final battle as a "cataclysmic" event.

"It changed English society, changed the way in which English politics worked, changes in architecture, the introduction of castles, the language we speak today is a result of 1066, that mixture of Old English and French," he said.

Home Secretary and local MP Amber Rudd, along with the mayor of Falaise in Normandy, Eric Mace, will be among dignitaries from both sides of the English Channel marking the anniversary.

The annual re-enactment of the battle, taking place at Battle Abbey on Saturday and Sunday, is a sell-out English Heritage said.

Meanwhile, a bust of William the Conqueror was unveiled at Berkhamsted Castle in Hertfordshire, where English leaders surrendered to the king in 1066.

Thousands of soldiers were killed on 14 October 1066.

The dead will be commemorated at a service later at Battle Church in Hastings.

I remember how it was alike in 1966 in England. (Not just football-related or reading Astérix and the Normans but all the other anniversary-hype, oo The date doesn't ring a bell with every American, so I was a little surprised when it turned out the person taking the money not only knew the date, her husband and her had just visited the park where it was signed a couple of years previous!
1 Reply
2
Reply Sat 15 Oct, 2016 03:26 am
@Blickers,
Are you mixing it up with Magna Carta? That was signed, Hastings was fought. Battle Abbey is supposed to be built on the site.

The monument to the Magna Carta was built and paid for by Americans and is, unlike embassies, officially American soil.
0 Replies
1
Reply Sun 16 Oct, 2016 02:40 am
@izzythepush,
Happy Birthday, Norman Britain. I hear it was an awful birth.

1 Reply
1
Reply Sun 16 Oct, 2016 03:24 am
1066 was one of the years I easy remembered in school. Most others I forgot very fast.
It is fun to think about that the part of Sweden I am from was ruled by a Danish King in England.
It is understandable that some people think that GB, Denmark, Norway and Sweden should again get together as a kind of loose union.
1 Reply
1
Reply Sun 16 Oct, 2016 03:45 am
@Walter Hinteler,
Sweyn Forkbeard had already conquered England in 1013, but was then thoughtless enough to die a little over a month later. The Danes in England proclaimed Cnut king, even though he had an older brother in Denmark. Æthelred Unræd returned from Normandy and drove Cnut out. Cnut had it all to do over again. Those Saxons are an obstreperous lot . . . i mean, you Saxons.
1 Reply
2
Reply Sun 16 Oct, 2016 03:49 am
@saab,
Scania was conquered by Harald Bluetooth, father to Sweyn and grandfather to Cnut. For someone born in the tenth century, he must have been very savvy about electronic technology.
1 Reply
1
Reply Sun 16 Oct, 2016 04:36 am
@Setanta,
I do not come from Scania but another part of Sweden which was Danish probably from around 900. The first border was created around year 1000 and kept being Danish until 1645
1 Reply
1
Reply Sun 16 Oct, 2016 04:43 am
@saab,
The Jelling stones are massive carved runestones from the 10th century, found at the town of Jelling in Denmark. The older of the two Jelling stones was raised by King Gorm the Old in memory of his wife Thyra. The larger of the two stones was raised by King Gorm's son, Harald Bluetooth in memory of his parents, celebrating his conquest of Denmark and Norway, and his conversion of the Danes to Christianity. The runic inscriptions on these stones are considered the best known in Denmark. 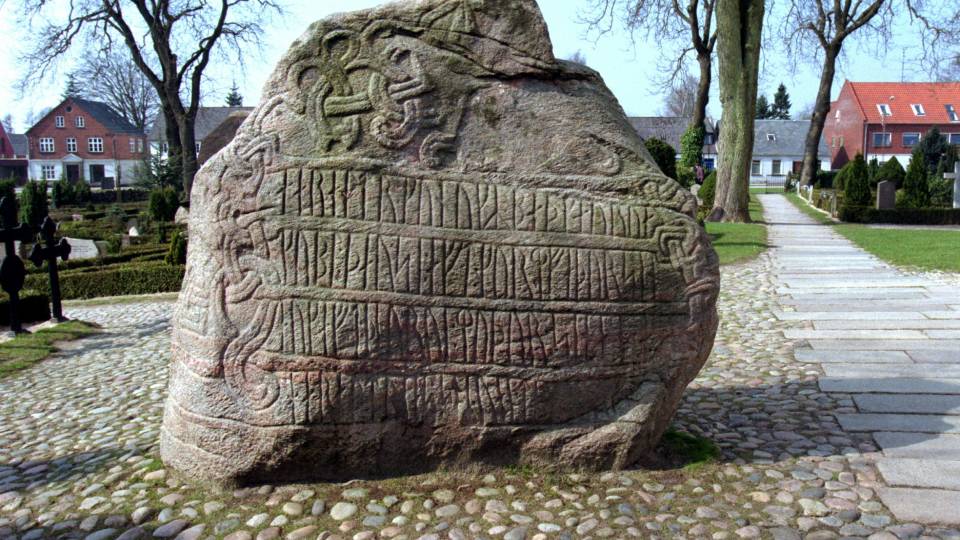 Those Saxons are an obstreperous lot . . . i mean, you Saxons.

We (I mean we Saxons) only sent the obstreperous lot over the Channel. The friendly, kind stayed here.
0 Replies
0
Reply Thu 20 Oct, 2016 01:20 pm
@izzythepush,
There is a term in psychology called "cognitive dissonance," an unconscious coping mechanism, whereby an individual's unconscious deals with incongruity in one's life by changing one's attitude (to deal with the incongruity). An example: during the military draft, a student in college with long hair, and hippie lifestyle, might have become a gung-ho soldier, after being drafted and realizing his long hair, and hippie lifestyle, is a thing of the past. So, in context of Brexit, I find this nostalgic thread of English history as a possible example of the uncoscious workings of "cognitive dissonance."

Not that this is correct; however, if one was still, in the future, to be part of the EU, the nostalgia of English history might take a back seat to a more broad view of European history? God save the Queen!
0 Replies