so "looking patriotic" even faked is ok as long as it's not Kerry doing it? interesting. 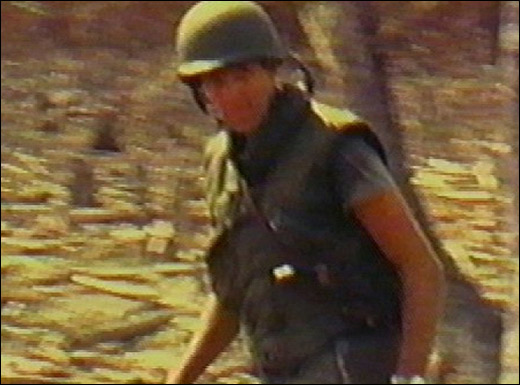 this is a battle scene??? it's a guy walking around! i've seen the entire clip as presented by the networks. a bunch of times...

I'm not sure whether the author of this thread does or does not wish to discuss anarchy. I do think that the flag raising on Iwo Jima was not "faked" and its symbolism is not fake either.

\
it just gets more and more interesting

The photograph at the right of Marines raising the American flag at the summit of Mt. Suribachi during the battle for Iwo Jima has become an enduring image of bravery and heroism. However, this was actually the second flag raised on the mountain's summit that day. The first flag-raising occurred a couple of hours earlier - shortly after Marines had gained the top of the mountain after hard fighting. This flag was deemed too small to be easily seen from the base of the mountain so a second, larger flag was raised.

from your cite posted above, at the first flag raising there was no photographer so after a photag became available there was a second flag raising. which by no means detracts from the meaning or significance of the event but it is fake

0 Replies
1
Reply Tue 14 Sep, 2004 09:51 pm
Just 'cause that Iwo Jima photo was posed doesn't make it a fake. It just makes it "the formal photo." I liked climbing around the bronze statue on Fifth Avenue when I was a little kid.

The saddest part is Ira Hayes dying in puddle of water drunk. Wasn't he one of the raisers? Or was that Jim Thorpe?

There has to be an Indian in the group. The Indians know about being warriors and such. Arguably considering all the broken treaties they are the biggest chumps of all.

If Bush wins, I'll just think of what it must be like to be an Indian. I might even consider going on the warpath myself. But I'm too old for the draft. I may just have to hurl words and epithets.
0 Replies
1
Reply Tue 14 Sep, 2004 11:14 pm
I have read about that photograph. The marines wanted to place a flag. There was a photographer who was waiting for them to get it in place and planned to have the men formally posed beside it once it was up. He was fooling around with the camera and just incidentally snapped the shot of the men pushing the flag into place. He took the posed shot too and didn't realize what he actually had until the film was developed. I don't think the flag was either put up for the photographer and I don't think it was fake.
0 Replies
1
Reply Tue 14 Sep, 2004 11:30 pm
Getting back on the topic I do think it is harmful to call anybody terrible names and accuse them of all sorts of silly things. People should ask themselves how well they function or how well could they do their job if others were calling them terrible names andaccusing them non stop. I agree it is our duty to say how we think things should be done. I wish the people would talk about that instead of just calling names.
0 Replies
1
Reply Wed 16 Nov, 2005 10:30 pm
Lash wrote:

I suppose the question is, in this age and time, how do we, the public, go back to influencing respectful criticism of potentially destructive policies and discouraging smear tactics in campaigns? It seems to me that the average US citizen will just go with whoever puts on a better show, and the nastier it is, the higher the ratings, and the voter turnout.

Cav poses an incredibly important question, IMO. How do we force change and get back to effective public discourse, as people working for positive change, without falling prey to partisan divisions? A populist party?

I think the polling for the media reflects the public's basic mistrust of their agendas--and their utter failure in keeping important issues on the forefront of the news.

They know we hate them (at least in general. I think they poll down there with lawyers...)--but they need to know why. We should be getting in depth investigative reports of how our money is spent, which accusations (policy, not personal) are correct, and which are false.

They have the responsibility to INFORM the public, but they either front their own political agendas (on both sides), or cow to the lowest common denominator for ratings, or subcriberships. They are no longer (IMO) serving the public, but serving themselves.

In this climate, I think the country is ripe for something completely different. I mean, who is for campaign reform? Who wants a good solution for healthcare? Who wants to see real measures toward sensible stewardship of our resources?

(Sorry for flipping personas. I had an account snafu, due to an e-mail change. Lash Goth and Sofia are now just Lash.)

You will notice that Lash publicly admitted that she was switching identities and on another thread (IIRC), she explained why... Pity you couldn't be brave enough to admit the same.
0 Replies