Unless the Vegas odds makers have it wrong (which is very unlikely), then it's only a matter of time now.

Bookies frame the odds based on the amount bet and only pay out a portion of the total betting pool.

The odds merely reflect the proportional amount that punters have bet on each possible outcome
(less the bookmaker's profit) and do not necessarily reflect the winner.

Giddyup Hillary.
0 Replies
2
Reply Tue 7 Jun, 2016 12:36 am
@jespah,
I agree! This is an historic day in American politics and American history. The odds are about 1-4 in favor of Mrs Clinton.

... This is an historic day in American politics and American history...


Regardless if the article (a/an) is followed by a word that sounds like a vowel, but isn't, "a" is correct, not "an." If I'm wrong, I might have learned this incorrectly?
1 Reply
1
Reply Tue 7 Jun, 2016 01:19 pm
@Foofie,
You got it right, it is "a" since the "h" in historic is pronounced.
0 Replies
3
Reply Tue 7 Jun, 2016 01:21 pm
Congratulations to Hillary and to America for knocking down another 'first' on the list.
0 Replies
1
Reply Wed 8 Jun, 2016 07:27 am
Today should be the first day democrats are united to fight republicans for the house and senate and the Presidency. It should be honeymoon period for democratic nominee Hillary Clinton. Instead, Hillary and the millions who voted for her do not get to celebrate her victory in the normal way. We have to indulge an old man who can't believe his revolution is not going to happen for him. Why can't he celebrate his accomplishments he did do in this race of which there were many instead of indulging in a pity fest and encouraging these Bernie or Bust to more extreme behavior. I know he has disavowed it and he means it, but every time he talks about the rigged system or implies Hillary is bought and paid for and talks of the media, he just encourages his more rabid supporters to harass the media and others.
1 Reply
3
Reply Wed 8 Jun, 2016 07:31 am
@revelette2,
Give Sanders a week or two to think about things. It's been a long race with lots of emotion. It takes a while to come down.
2 Replies
2
Reply Wed 8 Jun, 2016 07:41 am
@engineer,
engineer wrote:

Give Sanders a week or two to think about things. It's been a long race with lots of emotion. It takes a while to come down.

I agree with that. Also, there are a lot of "Back Office" negotiations which go on before these conventions to get your agenda included to the degree you like. I'm certain that a lot of posturing goes on to gain an advantage at the negotiating table.
1 Reply
1
Reply Wed 8 Jun, 2016 07:52 am
@engineer,
Well, Hillary had just as much at stake in 2008, she was closer to Obama then when she conceded the race to Obama and appeared openly with him in campaign stops. I believe it was year ago yesterday when she conceded, they must have worked out a deal in record time.
0 Replies
Below viewing threshold (view)
-5
Reply Wed 8 Jun, 2016 07:55 am
@rosborne979,
The "old PUTZ" could easily be dead by then.
0 Replies
1
Reply Wed 8 Jun, 2016 08:01 am 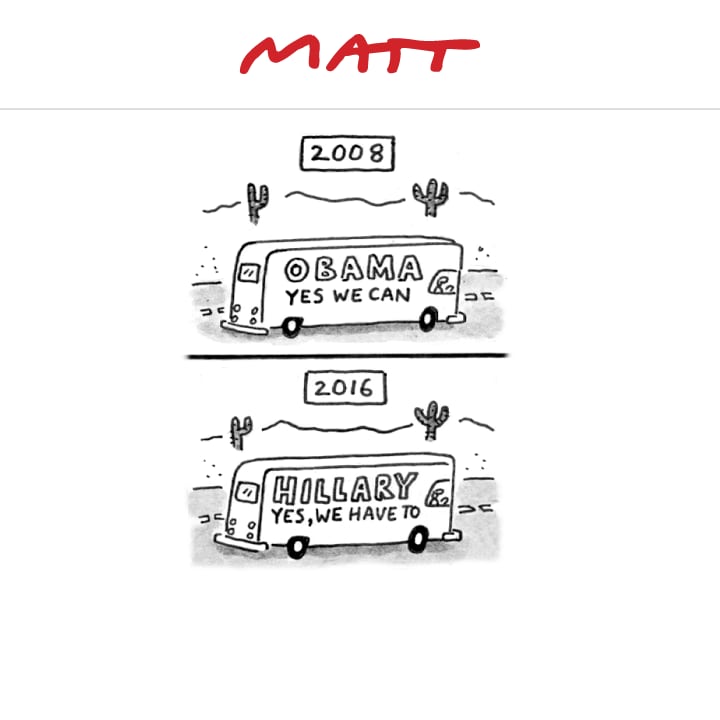 Second, as the first woman to receive the democratic party nomination to run for president, all I can say is... Is she really the best they got?

So she is again lying .

Let he, who is without sin, throw the first stone!
0 Replies
0
Reply Wed 8 Jun, 2016 08:42 am
Hillary Clinton Made History, but Bernie Sanders Stubbornly Ignored It

Revolutions rarely give way to gracious expressions of defeat.

And so, despite the crushing California results for him that rolled in on Tuesday night, despite the insurmountable delegate math and the growing pleas that he end his quest for the White House, Senator Bernie Sanders took the stage in Santa Monica and basked, bragged, and vowed to fight on.

In a speech of striking stubbornness, he ignored the history-making achievement of his Democratic rival, Hillary Clinton, who became the first woman in American history to clinch the nomination of major political party.

Mr. Sanders waited until 15 minutes into his speech to utter Mrs. Clinton’s name. He referred, almost in passing, to a telephone conversation in which he had congratulated her on her victories. At that, the crowd of more than 3,000 inside an aging airport hanger booed loudly. Mr. Sanders did little to discourage them.

This would be the time, under normal circumstances, for a primary rival to acknowledge insurmountable odds, salute a prevailing opponent and begin the work of stitching together a divided political party.

That was the conciliatory message that a vanquished Mrs. Clinton delivered eight years ago to the day, on June 7, 2008, when she ended her primaries battle against Barack Obama — a contest that was mathematically closer than Mr. Sanders’s is now.

“We all know this has been a tough fight,” Mrs. Clinton said at the time. “But the Democratic Party is a family. And now, it’s time to restore the ties that bind us together.”

On Tuesday, she was effusive in her praise of Mr. Sanders and her outreach to his supporters, mentioning him by name three times in her victory address in Brooklyn.

“Let there be no mistake,’’ she said. “Senator Sanders his campaign, and the vigorous debate that we’ve had about how to raise incomes, reduce inequality, increase upward mobility have been very good for the Democratic Party and for America.’’

But Mr. Sanders, who calls himself a revolutionary, is openly skeptical of the traditions and expectations that govern the party whose nomination he covets. Throughout his campaign, he has regarded the Democratic Party itself with suspicion and distrust.

Party unity, it seems, is the furthest thing from his mind at the moment.

Far from backing down, Mr. Sanders promised to take his campaign to the Democratic convention in Philadelphia this summer, raising the possibility that he could remain in the race, without ever conceding defeat, until July.

“We will continue to fight for every vote and every delegate we can get,” Mr. Sanders thundered.

Declaring that the movement he has begun is “more than Bernie,” Mr. Sanders sounded at times messianic.

“Our vision,” he said, “will be the future of America.”

Inside the airport hanger in Santa Monica, anger at Mrs. Clinton, and the establishment she exemplifies, was visceral and abundant, overshadowing her electoral advantage and barrier-breaking night.

Freddie Paull, a 26-year-old filmmaker from Glendale, Calif., was not interested in milestones. He said he thought Mrs. Clinton was a crook. “She could be indicted literally tomorrow if the system is not corrupt,” he said.

“I would love to see a woman in office,” he added. “But I do not want to see Hillary Clinton in office, because she has no honor.”

Should Mr. Sanders drop out, he said, he was prepared to vote for Mr. Trump.

Amid chants of “Bernie or Bust” and loud boos as election results rolled in, Alison Bacon, an actress living in Los Angeles, assailed Mrs. Clinton for having proclaimed victory before the Democratic Party had formally bestowed it on her at the convention.

“I think it’s absolutely unjust, undemocratic, un-American,” she said. “What kind of example is that setting?”

Of course, ending a campaign is always painful, especially one that so consistently defied expectations and openly challenged the political order.

From its humble start in April 2015 outside the Capitol in Washington, in a sparsely attended and hurried announcement speech (“We don’t have an endless amount of time,” he warned the gathered reporters, “I have to get back”), Mr. Sanders built a rollicking national movement whose crowds, fund-raising and devotion upended the Democratic race.

And Mr. Sanders was not merely a candidate to his supporters. With his everyman appearance and unvarnished anger, he embodied the message that thrilled his followers: that it was time for working Americans to rise up and reclaim a country that was being corrupted by elites and their wealth.

“When we began this campaign a little over a year ago, we were considered to be a fringe campaign,’’ Mr. Sanders said on Tuesday, adding wryly: “I think that has changed, just a little bit.”

But even as he acknowledged a “very very steep fight” to winning his party’s nomination, he did not signal an end — still electrified, it seemed, by the crowds chanting his name.

Howard Dean, a Democrat and a former governor of Vermont, can sympathize. “It’s very hard to concede,” he said. “You are tired. You are cranky. You’ve worked your butt off for two years.”

Nobody, Mr. Dean said, resisted ending a presidential campaign more than he did. Once a high-flying front-runner, he had a string of setbacks that left him feeling, by February 2004, much as Mr. Sanders does today: furious at an unfair system and determined to fight on.

Then Al Gore called. Mr. Dean fulminated, uninterrupted, for 10 minutes, “ranting and raving,” he recalled. But Mr. Gore, schooled in the art of painful concessions, was blunt. “You know, Howard,” he said, “This is not really about you. This is about the country.”

Mr. Dean, taking the advice to heart, quit the campaign a few days later. “The minute he said it,” Mr. Dean recalled, “I looked like an idiot to myself.”

He said he wonders whether Mr. Sanders will heed the warning. “Bernie has changed politics, but his changes are not going to be realized unless he leads — and leading is not going to mean tilting at windmills at the convention,” Mr. Dean said. “He has to switch into the mode of a statesman.”

“You don’t get any points for carrying on or complaining about it,” Mr. Dean added. “You get points for sucking it up.”

0 Replies
2
Reply Wed 8 Jun, 2016 08:46 am
@woiyo,
She is the first woman who has reached the votes and delegates needed to win a nomination of national party for President. One again, distinctions and the point goes over your head.
0 Replies
5
Reply Wed 8 Jun, 2016 08:50 am
@woiyo,
I know who Victoria Woodhull was. That was not the statement here - the statement was that this is the first female to receive a major party's nomination.

Not to pick on you in particular, but, seriously, there are tons of other places to be adversarial. Go and have at it and enjoy yourselves!

All I wanted to point out was the historic first. Love or hate this person, that is the point of this topic.

I hope everyone who is enjoying themselves with the adversarial parts of this election (and there are far too many to count) can enjoy their fights elsewhere.

Historic moment duly noted, folks.
1 Reply
-1
Reply Wed 8 Jun, 2016 09:30 am
It is what it is. Of course every moment in time is in its own right historical, as every second in the past is part of history.

Congratulate her? Nope, ain't gonna do that. Truth here is that the way everybody is yammering on about this tells me that many (I said many, not all), would have voted for any woman as a way to show their supposed progressive attitudes. My mother voted that way. If there was a female on the Democratic line, she gave them the vote. Minorities came in second.

Women have been making strides for years with far less fanfare and had it not been for them, Ms.Clinton would likely not be located where she currently is.

But go on, keep slapping your little old selves on the back, pretending that this is somehow a miracle.

From what I am seeing, there will either be a homosexual or Transgender candidate in 2020 or 2024 so the supposedly liberal minded folks can continue their journey of showing how saintly they are. Look deep within and ask if you are voting for a woman or a qualified individual.

Oh, and try to be brutally honest with yourself in your self-assessment.