Forums: Science, Space, Fraud, New Technology, Bogus Science
Email this Topic • Print this Page
Reply Fri 15 Apr, 2016 10:04 am
I first heard of this and thought, "nutjob with a government grant". But apparently the experiment has been replicated twice by independent researchers with positive results. The explanations in the articles sound like techno-babble and the researchers themselves admit that the results seem to violate the laws of physics. In a nutshell, it's a powerful EM source in a resonant chamber shaped in such a way that produces a directional force on the chamber. There is no radiation pressure leaving the chamber. It would seem to be thrust without a working mass. I've been waiting for someone to either debunk it or confirm it. I would like to hear the learned opinions of A2K members. Thank You.
Type: Question • Score: 13 • Views: 16,050 • Replies: 161
1
Reply Fri 15 Apr, 2016 10:13 am
@TomTomBinks,
I researched this topic by typing keywords 'EM Drive' into Google and this was the result (confirmation is directly from NASA):

(I actually know the answer to this one... but I think you have no idea what you are talking about.)

1 Reply
3
Reply Fri 15 Apr, 2016 12:58 pm
@Ragman,
This will be really big news if it turns out to be true. But, it is highly unlikely that this will turn out to be true. Claims to violate an important principle of physics will need to be carefully checked-- extraordinary claims require extraordinary proof.

The NASA study you refer to hasn't even been peer-reviewed yet.

I would bet big money that this EM Drive will never be scientifically confirmed. These claims to revolutionize physics come up from time to time. They almost never amount to anything.

Does anyone else here remember the hubbub around Pons and Fleischmans table-top cold fusion device?

The reference to NASA is deceptive because the scientists who actually confirmed it are consultants for NASA and not official NASA spokesmen. And they apparently part of a "fringe" science experimental consultative group which is only tenuously associated with NASA.

Besides that bit of information, many other reports on this "Discovery" say that the results are unexplained and un-reproducible.

When I read the "Explanation" for the discovery I found it very fishy sounding with lots of scientific terminology but very little actual measurable or understandable explanation. Exactly the opposite of what you would expect from a reputable source.

1 Reply
1
Reply Fri 15 Apr, 2016 04:56 pm
@farmerman,
Love the idea of using large lasers to drive small/tiny probes to a large part of C but my question is how are they going to power the return radio transmissions with the information the probes would picked up.

Maybe creating a long relay chain of probes could be done.

I believe what this is about is the Physics principle about conservation of energy.
https://en.wikipedia.org/wiki/Conservation_of_energy

"In physics, the law of conservation of energy states that the total energy of an isolated system remains constant—it is said to be conserved over time. Energy can neither be created nor destroyed; rather, it transforms from one form to another. For instance, chemical energy can be converted to kinetic energy in the explosion of a stick of dynamite.

A consequence of the law of conservation of energy is that a perpetual motion machine of the first kind cannot exist. That is to say, no system without an external energy supply can deliver an unlimited amount of energy to its surroundings."

proxima centauri is a star. See where theyre going?


Given they are talking about 25 or so years trips they can only be going to the nearest stars. 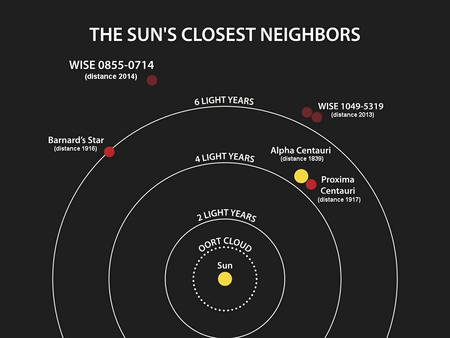 I guess we can file this with the magnet motor and the perpetual motion machine!

Yes indeed in my opinion at least.

Too bad Cold fusion while the idea did not break any natural law did not turn out to be true.
0 Replies
1
Reply Fri 15 Apr, 2016 05:53 pm
@BillRM,
not the point Billy. You asked "How they gonna phone home"?(or something like that). When I said Proxima Centauri was a star, I made a comment about "See where theyre going with this"?
I was referring to the possibility that they would use solar power to power up the car phone. ( You didnt need to post a map)
1 Reply