Could not care less about whether my argument "works" on you or not. In any case, it was intended for open-minded people...and I just do not consider you particularly open-minded. I hope to see that change, but I will not hold my breath.

I am not "being manipulated" by either party. I am simply working with a pragmatic outlook. My personal opinion is that if the Republicans take the Oval Office...the agenda I favor suffers...and suffers significantly. If the day comes where I see a meaningful alternative to working within the system now in place, I might be persuaded to move in a different direction. I don't see that on the horizon.


Talk is indeed cheap, but the truth is extremely valuable. And look what happened to you Frank, you turned up wrong in so many ways, as did so many others.

Two...you are taking yourself too seriously.


That is not how we of the TTT(Truth Teller Tribe) roll.

Now, why does that not surprise me?

Whatever helps you to get your rocks off guy.

Now, why does that not surprise me?

Whatever helps you to get your rocks off guy.


I am Zen, the quality of our grasp on reality is everything to us, and sometimes "I told you so's" are earned, particularly when listening and civility are found lacking from others....as it was here .
1 Reply
4
Reply Tue 23 May, 2017 01:34 pm
I believe you'll find I'm Zennier than you.

As far as Trump, I was warning the naysayers well ahead of the election, not to rule him out of the game. Between the Dems pinning all their donkey tails on Hillary, the anger that Bernie was not given a real chance and the NaderSyndrome, whereby and wherein some left leaning folks cast votes to a third party, along with a few key states tipping over to Trump...
...well, it started a surreal nightmare for many...including at this point some who voted for Trump and aren't getting what they'd been promised.

In the words of Simon and Garfunkel, laugh about it, shout about it, when you've got to choose, every way you look at it you lose. 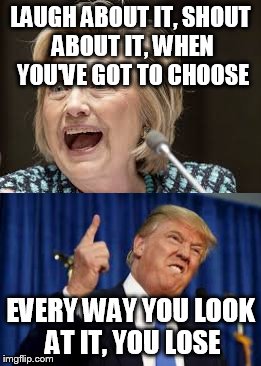