Comment:
The republican party certainly does not want her and due to her Trump loving past, democrats think she is an idiot like all the other Trump supporters. 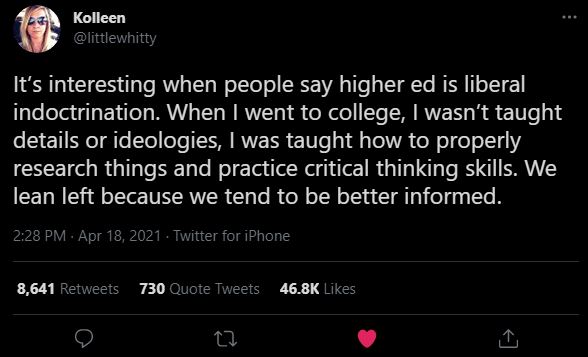 1 Reply
1
Reply Sat 1 May, 2021 09:25 am
@Region Philbis,
Education is a swear word for republicans, especially for their women, they like them dumb and silent...

Education seems to have evaded most republican men too. They refuse to listen to reason because it causes their fragile world to crumble and crack under the pressure of critical thought and rational.

Their delusion does not require them to innovate or think that hard. They just repeat the memorized conspiracy theory they were fed by their masters and that is supposed to make it okay for them to be idiots.

HOUSTON — The red dot of a laser pointer circled downtown Houston on a map during a virtual training of poll watchers by the Harris County Republican Party. It highlighted densely populated, largely Black, Latino and Asian neighborhoods.

“This is where the fraud is occurring,” a county Republican official said falsely in a leaked video of the training, which was held in March. A precinct chair in the northeastern, largely white suburbs of Houston, he said he was trying to recruit people from his area “to have the confidence and courage” to act as poll watchers in the circled areas in upcoming elections.

A question at the bottom corner of the slide indicated just how many poll watchers the party wanted to mobilize: “Can we build a 10K Election Integrity Brigade?”

As Republican lawmakers in major battleground states seek to make voting harder and more confusing through a web of new election laws, they are simultaneously making a concerted legislative push to grant more autonomy and access to partisan poll watchers — citizens trained by a campaign or a party and authorized by local election officials to observe the electoral process.

This effort has alarmed election officials and voting rights activists alike: There is a long history of poll watchers being used to intimidate voters and harass election workers, often in ways that target Democratic-leaning communities of color and stoke fears that have the overall effect of voter suppression. During the 2020 election, President Donald J. Trump’s campaign repeatedly promoted its “army” of poll watchers as he publicly implored supporters to venture into heavily Black and Latino cities and hunt for voter fraud.

What to say? It is so typical (sorry for overuse of word)and blatant of republicans today that if wasn't so alarming and depressing it would be boring. What is worse, they will more than likely get away with it because of the way McConnell and Trump managed to fill the courts with likeminded justices and judges.
0 Replies
1
Reply Sat 1 May, 2021 10:41 am
Kansas House Republican Arrested Over Alleged Attack On Student
https://www.huffpost.com/entry/kansas-republican-mark-samsel-arrested_n_608d3f1de4b05af50dc3c519

Very fine people (cynical)
1 Reply
1
Reply Sat 1 May, 2021 05:30 pm
@TheCobbler,
That was just plain weird! Especially the part about being staged!
0 Replies
1
Reply Sun 2 May, 2021 06:14 pm
Trump may have botched the census and screwed Republicans in the process
https://www.dailykos.com/stories/2021/4/29/2028069/-Many-are-wondering-if-Trump-botched-the-Census-It-would-be-perfectly-on-brand
0 Replies
2
Reply Sun 2 May, 2021 06:19 pm
Krugman: If Biden passes the American Families Plan, Republicans are screwed
https://www.dailykos.com/stories/2021/5/1/2028517/-Krugman-If-Biden-passes-the-American-Families-Plan-Republicans-are-screwed 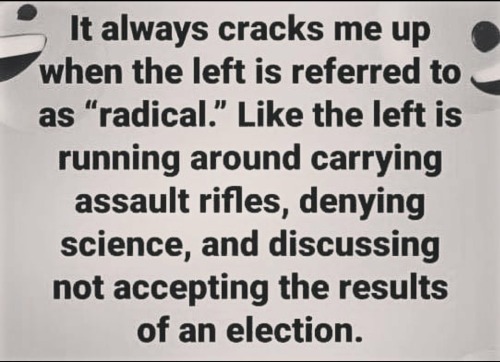 Child predators should not be shielded by privacy laws!

Opinion: Elected Republicans are lying with open eyes.
Their excuses are disgraceful.

For the activist base of the Republican Party, affirming that Donald Trump won the 2020 presidential contest
has become a qualification for membership in good standing. For the party’s elected leaders, accepting the
clear result of a fair election is to be a rogue Republican like the indomitable Rep. Liz Cheney (Wyo.) — a
target for Trump’s anger, public censure and primary threats.

Nothing about this is normal. The GOP is increasingly defined not by its shared beliefs, but by its shared
delusions. To be a loyal Republican, one must be either a sucker or a liar. And because this defining
falsehood is so obviously and laughably false, we can safely assume that most Republican leaders
who embrace it fall into the second category. Knowingly repeating a lie — an act of immorality — is now the
evidence of Republican fidelity.

0 Replies
1
Reply Wed 5 May, 2021 11:20 am
@Region Philbis,
The thing is, when Trump got elected we democrats did the same thing, we called the election illegitimate and we still believe that it was.

We doubted the vote tallies were correct, and suspected Russians interfered in the electronic voting systems.

Later we found out that the vote tallies were indeed correct and that Russians tried but failed to interfere in the electronic voting systems.

When the FBI came out and said the election tallies were correct many of us still doubted this to be true.

We democrats underestimated the stupidity of the republican party.

I still think democrat votes were destroyed in Wisconsin, Michigan and other places. Would Trump do something like that to win? Look how he tried to cheat in this last election and you have your answer. Scott Walker was not there to send his goons out to tamper with the ballots.

Trump took democrats to court and we did not even get a recount like he did.

So was his election legitimate? NO!

The Russians flooded our internet will millions of outright lies that republican to this day still believe. Fox News, greedy social networks and talk radio did their part to distribute these lies...

Elections have to be fair to be legitimate.

On the other hand Joe Biden did not have a foreign country fill our social networks with lies and fake news. He did not disenfranchise voters from voting.

In fact, he made it easier for "anyone" who wanted to vote, to vote.

His tax cuts to the rich, destroying the fabric of our government and readiness for a pandemic or other disaster were very plain to see.

His racism, hatred and constant deceptive lying were a daily occurrence on Twitter.

The writing was on the wall.

Trump lost because he was a horrible president.

Was there election fraud when Trump got elected?

Was he a legitimate president? NO!

Russian lies and fake news do not a legitimate president make...

Trump tried to get the same fake news cycle running on Hunter Biden but he got his Twitter account taken down. He was ready to start the smearing all over again and failed to sew his discord. Social networks blocked Russian trolls and bots and Trump was forced to run as the loser he really is.

Republicans still voted for him because they are idiots but democrats were not divided by the fake news lies.

0 Replies
-1
Reply Thu 6 May, 2021 11:53 pm
I just wanna tell Biden that the Democratic Party has been taken over by black people and far-left cads, in spite of Biden's repeated claims to be a fan of centrism. Biden is a nice person, not a perfect president. Biden, please be yourself.
1 Reply
2
Reply Fri 7 May, 2021 11:43 am
@goldberg,
I think you mean the republican party has been taken over by nasty, uneducated white supremist racists and radical far-right murderous seditionists with their guns and fake religion.

I am a white guy in the Democrat party and around me I see not only black people (most of them moderates) but also moderate white people, Asians, Latinos, Jews, legal immigrants from every ethnicity and Biden IS a fan of centrism and the democratic party reflects that view.

And by "far-left cads", you mean those horrible people who are pushing for black lives matter (black lives do matter), investment in green energy, 15 dollars an hour minimum wage, maternity leave, free community college, student loan debt forgiveness and taxes on the ultra rich so they pay their fair share..?

Biden should distance himself from these terrible, "far-left cads" right away! (cynical satire)
1 Reply
2
Reply Fri 7 May, 2021 11:53 am
Lawyer Says Capitol Defendant Had ‘Foxmania’ From Watching Too Much Fox News
https://www.huffpost.com/entry/anthony-antonio-foxmania-capitol_n_60946e8ee4b0ae3c687c07f1

Comment:
This might be a believable claim if Anthony Antonio was countersuing Fox News for giving him a case of, "Fox News diarrhea".
1 Reply
2
Reply Fri 7 May, 2021 03:16 pm
Maddow: Republicans running against democracy not Democrats
https://www.msnbc.com/rachel-maddow/watch/maddow-republicans-running-against-democracy-not-democrats-111478853832

Turning the republicans against the ballot box.

They can't win using the ballot box because the electorate won't vote for them.

V I
3 hours ago
"A mind is a terrible thing to waste"
Anthony Antonio could have been reading Dr. Seuss and dressing up Mr.& Mrs. Potato Head

Amphiuma III
3 hours ago
This boils down to "my client is a sheep following the herd".

arlingtonguy54
4 hours ago
I have Foxitis when it’s on. I get a headache and feel nauseous from the bile they spew.

K. Bryant
3 hours ago
You don't even have to play Fox backwards to hear the evil messages

Paula Gray
2 hours ago
As soon as Rupert Murdoch and Putin became "friends" it was all over for the rest of the world. The trail of destruction is getting longer and longer.

ncwordman
4 hours ago
Maybe Fox needs a permanent disclaimer across the screen: Will harm your mental health.

Jaydon Tobler
4 hours ago
Every conservative is an independent free thinking patriot... until they get charged with something.

colonel 100
4 hours ago (edited)
So is the lawyer insinuating fox news staff should be in prison and not his client ?

My Name
3 hours ago
Foxitis will cause your IQ to drop by at least 70 points, be careful out there
0 Replies