"The trillion to Iran came out of our pockets but the stimulus money Biden borrowed from China..."

How transparent this republican propaganda hate is. Sounds like it came straight from Putin or Trump.

A simple Google search and nothing of the sort has happened. Not even close.

The cesspool of republican anti-American rhetoric underscores the necessity to keep them as far away from our government as possible.
2 Replies
1
Reply Tue 9 Feb, 2021 02:28 pm
@TheCobbler,
Behind all of these lies about Biden and Iran is Trump's centerpiece, a big fat foreign failure with Iran. Such a blunder that we and the rest of the free world have to deal with it for years to come. And Trump's promise to given the UAE fighter jets so he could build a titty bar in the UAE was about as crooked a deal as it comes.
1 Reply
2
Reply Tue 9 Feb, 2021 03:13 pm
Arizona Republicans still waging Trump's war on democracy
https://www.msnbc.com/rachel-maddow/watch/arizona-republicans-still-waging-trump-s-war-on-democracy-100728901530

The public already did what it needed to do, it voted Trump out by 7 million votes.

Public servants need to do as the public has voted.
0 Replies
2
Reply Tue 9 Feb, 2021 05:29 pm
Trump’s Lawyers Call for Dismissal of Trial on the Ground That They Will Never Collect Fees
The former President’s lead attorneys said that they had a “moment of lucidity” when they realized their chances of Trump ever paying them were nil.
By Andy Borowitz

Progressives are an odd mixture of evil and buffoonery. Luckily the buffoonery often undermines the evil.

Republicans are passing around the lie that Biden has given Iran a trillion dollars but won't give the American people stimulus checks...
Republicans have to spread lies to try and remain relevant but it only makes them look like, liars.

An Atlanta-area prosecutor has opened a criminal investigation into efforts to overturn the 2020 election result in Georgia in the wake of two calls then-President Donald Trump placed to state officials, urging them to invalidate Joe Biden’s victory in the state.

In a letter Wednesday to Georgia Secretary of State Brad Raffensperger, Fulton County District Attorney Fani T. Willis did not mention Trump by name but stated that her office is examining a raft of potential criminal charges related to “attempts to influence” the administration of the 2020 election in the state.

Oh yea, I forgot the best part of the lie.

"The trillion to Iran came out of our pockets but the stimulus money Biden borrowed from China..."

How transparent this republican propaganda hate is. Sounds like it came straight from Putin or Trump.

A simple Google search and nothing of the sort has happened. Not even close.

Just because you're too dumb to understand something, that doesn't make it a lie.

The stimulus will almost certainly be paid for with deficit spending, and China buys a lot of US treasury bonds.
0 Replies
-2
Reply Wed 10 Feb, 2021 10:50 am
@TheCobbler,
TheCobbler wrote:

Behind all of these lies about Biden and Iran is Trump's centerpiece, a big fat foreign failure with Iran. Such a blunder that we and the rest of the free world have to deal with it for years to come.

Mr. Trump is not responsible for the fact that Iran is a rogue nation.

And Trump's promise to given the UAE fighter jets so he could build a titty bar in the UAE was about as crooked a deal as it comes.

Another lie on your part. What was crooked about it? The UAE is a respectable nation.

I do understand that Israel opposed the deal, and maybe that means it should have gone through, but that doesn't mean that it was a crooked deal.
0 Replies
1
Reply Thu 11 Feb, 2021 02:14 pm
Half of Republicans say that the Capitol violence was mostly antifa’s fault
Quote:

In the hours after the Capitol was overrun on Jan. 6, a theory quickly emerged in conservative media: This wasn’t us. It was them.

The “them” was antifa, a loose-knit movement of sometimes violent activists focused on combating perceived fascism and racism. For months, President Donald Trump had been promoting the idea that antifa posed a dangerous, rampant, terroristic threat to the country. It was convenient for Trump, positing a shadowy left-wing group that demanded the response of a strong law enforcement hand. This was Trump’s reelection message, that he would hold antifa in check.

Antifa didn’t actually pose the threat that Trump suggested. The Justice Department under the leadership of William P. Barr had increased its focus on the movement but never found much evidence to substantiate Trump’s concern. The bigger threat, as the Department of Homeland Security made clear last year, was right-wing extremism, particularly white nationalist groups.

But the idea that antifa was a catalyst for unrest took hold among Trump supporters. So when unrest erupted at the Capitol that day, antifa predictably got the blame. Those storming the Capitol may have been wearing Trump gear, sure — but it was somehow antifa that was leading the charge.

That claim gained traction after the Washington Times reported that a facial recognition company had linked several of those photographed in the Capitol to antifa. That report quickly made it to Fox News and to the House floor, where Rep. Matt Gaetz (R-Fla.) elevated the theory. Unfortunately for Gaetz and Fox, though, the report was entirely incorrect and was ultimately rescinded. The storming of the Capitol wasn’t by antifa activists. It was, as it seemed, by supporters of Trump.

Yet, in a poll conducted last month by the American Enterprise Institute, half of Republicans said they thought that it was mostly or completely accurate to say that antifa “was mostly responsible for the violence that happened in the riots at the US Capitol.” Overall, 3 in 10 Americans said that statement was at least mostly accurate. 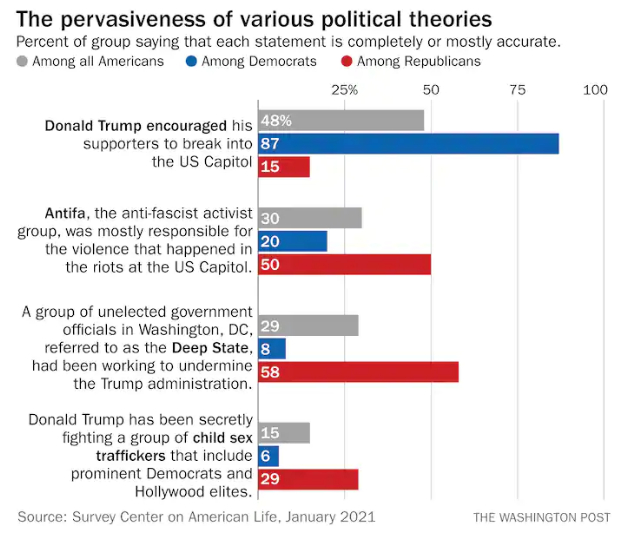 It is always easier to see your opponents as wrongdoers than your allies. A parent will always assume that it is their child’s friend who suggested doing the prohibited thing, not their beloved progeny. This effect was probably manifested after Jan. 6: A movement that had focused intensely on presenting itself as dedicated to law enforcement would naturally find it difficult to accept that some of its members took a different approach. So, maybe it was antifa’s fault?

“That wasn’t Trump people. That’s been a hoax from day one,” Michigan state Senate Majority Leader Mike Shirkey (R) said of the riot last week. He added that it “was all staged.” He later apologized for his remarks — but was caught on an open mic admitting that he still held those views. 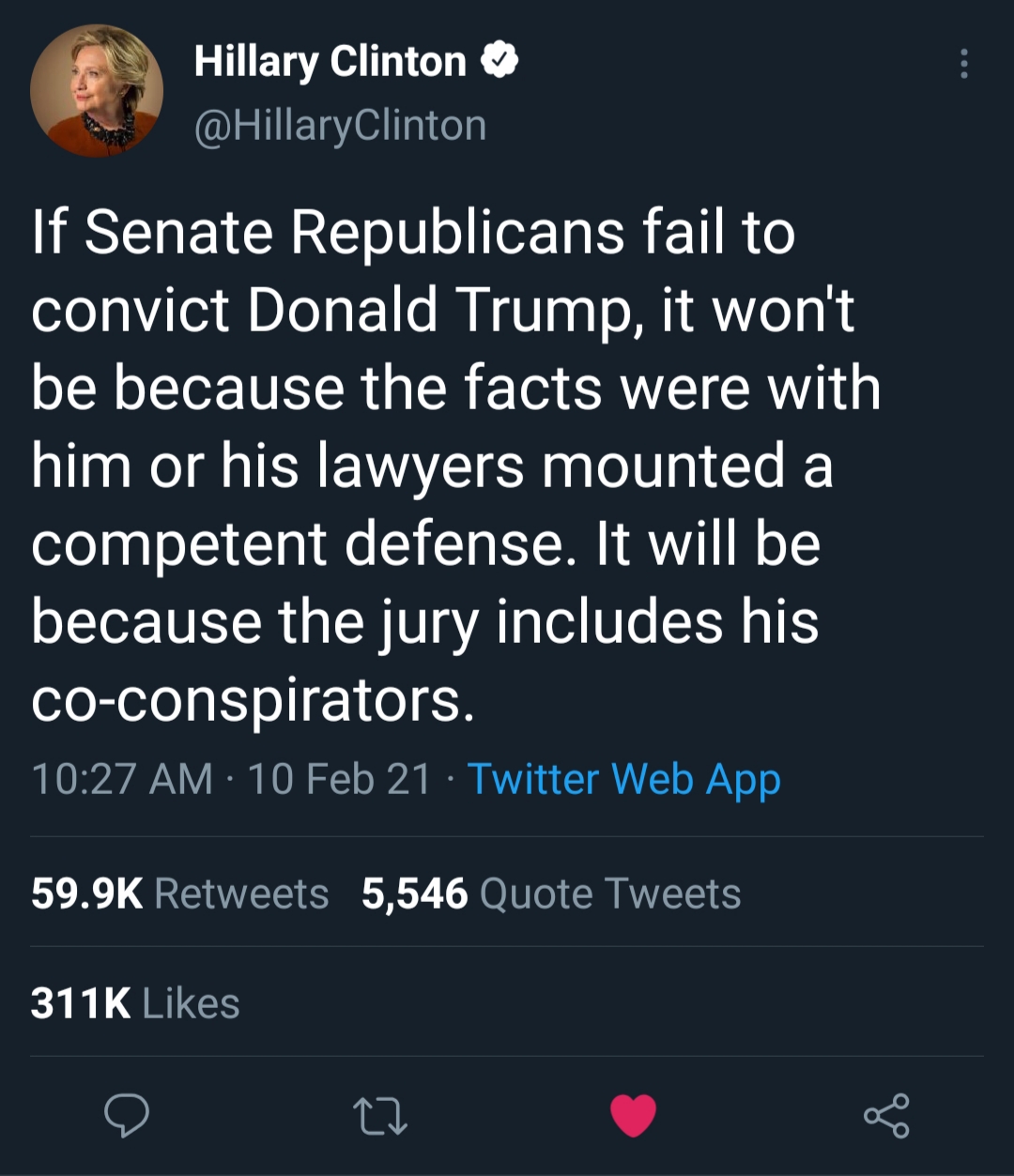 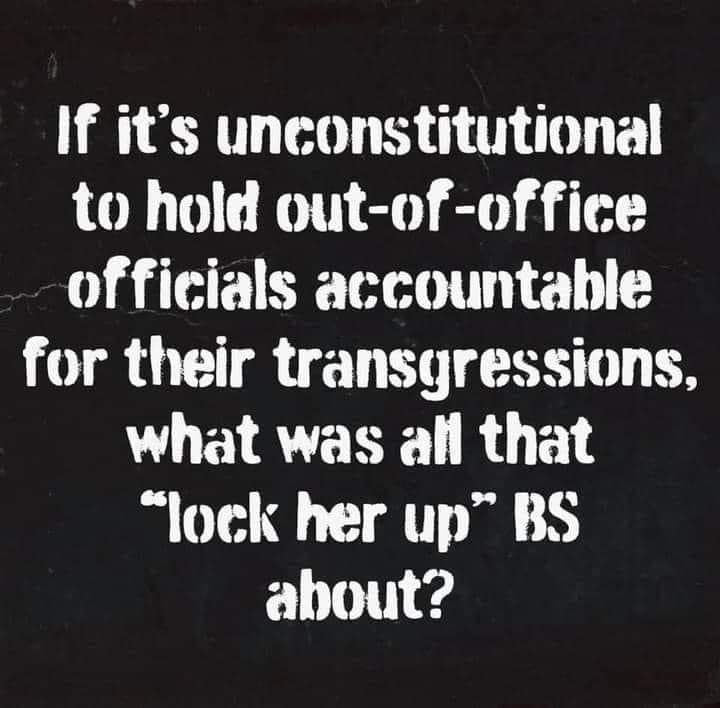 0 Replies
1
Reply Sat 13 Feb, 2021 12:09 am
Schoen certainly sounded like a mob bosses attorneys! Civil Rights lawyer, I thought right wingers hated those guys? Never thought about it before; but I guess it kinda makes sense, right?

Trump has been referred to as acting and governing like a "mob boss" more than once. In fact, if I remember correctly, he was very proud of this reference.

One of Trump's impeachment lawyers defended Mafia boss Vito Rizzuto, the other didn't heed a Canadian's allegations against Bill Cosby


Both U.S. lawyers named as Donald Trump’s defence team for his second impeachment trial have important Canadian connections: one defended Montreal Mafia boss Vito Rizzuto against racketeering murder charges and the other was the prosecutor who declined to pursue sex assault charges against Bill Cosby after the first accusations against the comedian were filed by a Canadian woman.

David Schoen is an accomplished civil rights and criminal lawyer based in Alabama known for his fierce advocacy. He certainly was vocal in his defence of Vito Rizzuto, who was the most powerful Mafia boss in Canada when Schoen represented him in a Brooklyn court.

Schoen was handpicked picked in 2006 by the Rizzuto family after interviewing several attorneys; he was the one they liked the best, National Post was told at the time.

“In my view, there is no need or valid reason whatsoever for Mr. Rizzuto to be incarcerated in a jail in Brooklyn, or anywhere. He is no risk of flight whatsoever and certainly no danger to anyone in any community,” Schoen said before Rizzuto’s trial for three gangland murders. The messy 1981 slayings became a rich part of underworld lore and were recreated in the movie Donnie Brasco, starring Al Pacino and Johnny Depp.

After Rizzuto’s guilty plea and sentencing, Schoen continued his strong advocacy. “I think he was penalized very unfairly,” he said. Even after Rizzuto’s death in 2013 Schoen spoke up for his former client, saying: “He was a very honorable man.”

Loyalty is a quality the former U.S. president likely admires.

Schoen did not return a request for an interview prior to deadline, Tuesday. He told his hometown newspaper, the Atlanta Journal-Constitution, that Trump personally called him about the job.

“I was flattered he asked me, and I’m honored to represent him,” Schoen is quoted as saying. He is not ordinarily placed “in that category” of a Trump supporter. Last year he won a suit to get a candidate for the Party for Socialism and Liberation on the presidential ballot and he is widely lauded for his civil rights work.

Schoen likely came into Trump’s orbit when he represented Roger Stone, a Republican strategist and longtime friend and advisor to Trump. Stone was convicted in 2019 of witness tampering, obstructing an official proceeding and five counts of making false statements, but was pardoned by Trump as his presidency drew to a close.

Now that Schoen is representing Trump, his connection with another former client is making headlines: Jeffrey Epstein.

Schoen had met with the man accused of underage sex trafficking several times to discuss leading his defence team. They last met for five hours mapping out a legal strategy a few days before Epstein died in jail, ruled a suicide but with lingering questions.
...............

That's plus $5 million in advertising. Oh, and BTW, it wasn't "tRump" who paid, it was his campaign!


Oops, excuse me - make that $50 million in advertising!!!!!!
0 Replies
3
Reply Sun 14 Feb, 2021 12:31 am
Trump, as the acquittal fully proves, did not operate in a vacuum.
The Republicans remain Trump's accomplices by continuing to protect him. What's more, many of them not only tolerate "authoritarianism light à la Trump", but apparently also very concrete political violence.
1 Reply