Rep. Andy Kim says he was devastated to see the smashed furniture, broken American flags, cigarette butts and other debris left behind by the pro-Trump mob that ran wild in the US Capitol. So he found a trash bag, got down on his knees and helped clean up.

"It was really just kind of instinctual. I didn't really like think about it, I just wanted to do something," the New Jersey Democrat told CNN. "I just really felt like I needed to try to play a role in just fixing this mess that had occurred."

Kim sheltered in his office in the Rayburn House Office Building during Wednesday's riot and went to House floor once it was safe, to complete the process of affirming President-elect Joe Biden's Electoral College victory.
"We had this really unbelievably raw debate that unfolded. Everyone was very emotional, still, really quite shaken, still," Kim said.

Early Thursday morning, he decided to take a walk around the building, which was still littered with broken glass and other debris.

"I made my way back to the Rotunda and was just devastated by just what I had seen, just the absolute terrible condition that it was in -- the trash and debris over the statues, the floor, some of the benches were askew, and there was a lot of broken furniture, broken American flags and different elements there."

He saw a police officer throwing away a pizza box and asked him if there were any more trash bags.

Then he picked up trash in the Capitol Rotunda and the National Statuary Hall.

A photographer took pictures of Kim working and they were shared widely on social media.

New Jersey Gov. Phil Murphy shared the photo on Twitter and said Kim "represents the very best of New Jersey and our nation. A true public servant who makes us proud every single day."

At one point, Kim passed a plaque marking the cornerstone that was laid by President George Washington.

What we do to prevent police officers from defending themselves against us is: 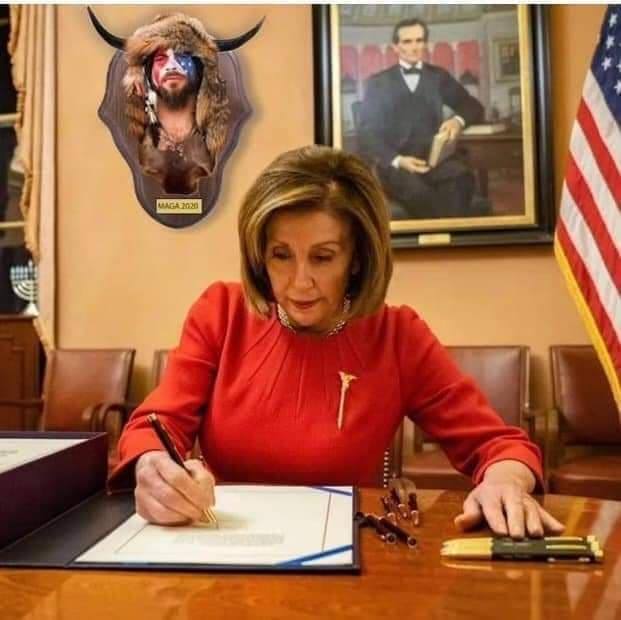 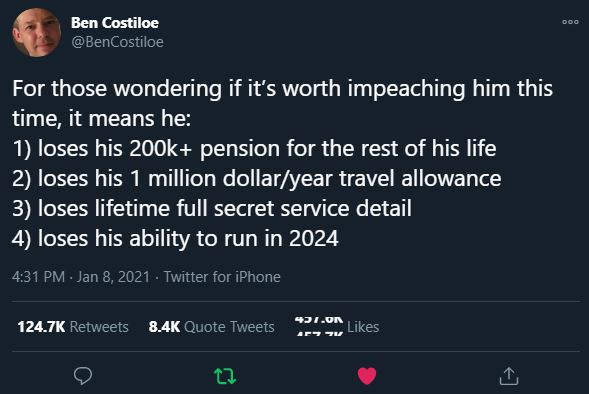 All of which is still only true if the senate is willing to convict. If not, Trump still leaves with all those presidential perks, and the second impeachment is basically symbolic.
2 Replies
2
Reply Sat 9 Jan, 2021 08:47 am
@snood,

maybe after seeing their house get ransacked, enough R's are finally ready to grow some balls and split from this idiotic charade concerning the election results.

and preventing 45 from running in 2024 is a win-win for those R's with presidential aspirations of their own...
0 Replies
4
Reply Sat 9 Jan, 2021 11:08 am
The Capitol police officer who died was beaten to death by a fire hydrant by Trump republican seditionists.

Republican sedition should be prosecuted for what it is... treason.

The leader of this sedition needs to be made an example of.

This was not a mere protest... this was insurrection and an act of war against the United States.

We need to go after these militias, disarm them, confiscate their arsenals and disable their propaganda machines. (delete their Twitter accounts)

The organizers of sedition are traitors too.

Progressives sure do hate freedom and civil liberties.

Luckily we have a system of courts in this country that will protect the people from these deranged progressives.

You republicans liberals hate restricting the liberties of seditionists and terrorists.

The same system of courts with Trump's appointees that declared the election free and fair?

I would really like the see the FBI's dossier on you Oralloy, let's hope they act upon their concerns regarding your bunker and arsenal...
0 Replies
1
Reply Sat 9 Jan, 2021 03:49 pm

Comment:
Freedom of speech does not include inciting sedition and telling roving mobs of murdering terrorists to "stand up".
0 Replies
7
Reply Sat 9 Jan, 2021 04:14 pm

At no time is your thoughts coherent, logical, right, moral or justified.

You now have proven how dangerously stupid you are.
2 Replies