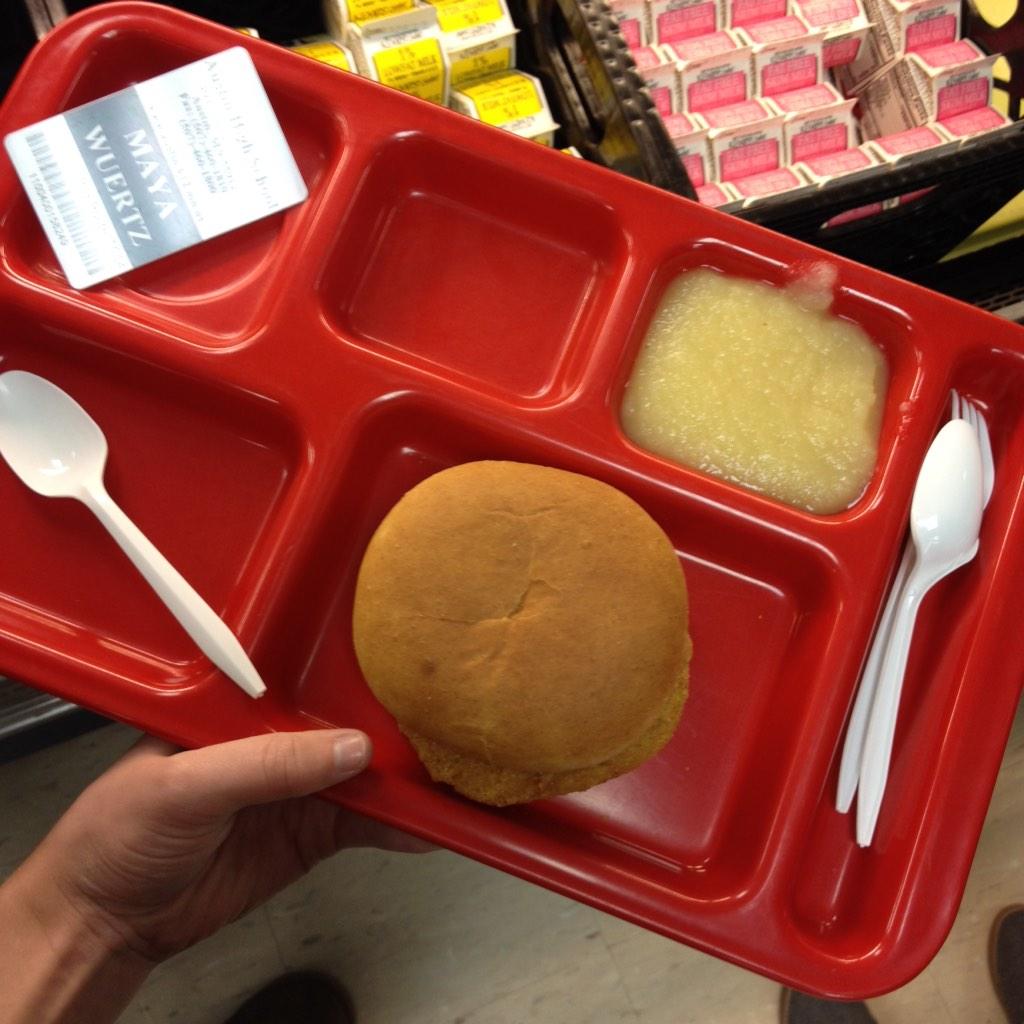 Type: Discussion • Score: 0 • Views: 2,986 • Replies: 37
No top replies
-1
Reply Fri 21 Nov, 2014 07:58 pm
http://www.thepoliticalinsider.com/thanksmichelleobama-students-go-twitter-mock-michelle-obamas-lunch-mandates/
0 Replies
0
Reply Fri 21 Nov, 2014 08:13 pm
This is great. Social media gives the targets of this do-gooder paternalism the power to voice their lack of consent. As a lifetime chef I am appalled that the crappola school lunchrooms serve has actually gotten worse. I would have doubted that this was possible.

What this teaches these kids is another lesson that this government is not listening to them, is perfectly willing to deprive them, is perfectly willing to lie to them, and not looking out for them. THey might as well learn this early.
1 Reply
1
Reply Fri 21 Nov, 2014 08:24 pm
@hawkeye10,
When in the 1970's I read Solzhenitsyn telling us how the bosses at the Gulag decided that the prisoners did not need any salt in their bread I had no idea that the cuisine he was describing was the future of American School lunchrooms.
0 Replies
1
Reply Fri 21 Nov, 2014 08:39 pm
Look on the bright side (for u, I dont care as I hate both the D's and the R's), our schools are teaching not only that adults can not be trusted but that spacifically D's cant be trusted. They are training future R voters.

The know it all need to control what everybody else does while ignoring them do-gooders done fucked up!
1 Reply
0
Reply Sat 22 Nov, 2014 12:39 am
@hawkeye10,
I've looked for ways to love the GOP and have never found one but the difference is still really major; I don't get anything like this absolute sense of loathing from pubbies,
1 Reply
1
Reply Sat 22 Nov, 2014 01:06 am
@gungasnake,

I promise you that those less than 1/20 kids will eat those veggies without sauce, the apple is the nastiest that we grow, people generally dont eat that type anymore, that sandwich is dry mostly filler with no sauce on the bun and probably non was offered, and that milk in no fat and low sugar so it tastes nothing like that good chocolate milk we got as kids.

Kids are supposed to eat this crap?
1 Reply
1
Reply Sat 22 Nov, 2014 01:35 am
@hawkeye10,
Oh, and the bun is off course whole wheat. When was the last time you saw whole wheat buns at a burger restaurant? How about in your house?

I heard that they gave the schools another year to figure out the tortilla situation. Turns out kids almost universally refuse to eat them...because they are nasty. The kids can and probably do lift the meat/filler patty out and eat it when they come on nasty buns, but when you serve a burrito in an inedible wrapper eating anything gets messy and a lot of work.
0 Replies
0
Reply Thu 15 Jan, 2015 08:03 pm
http://joeforamerica.com/2015/01/one-school-district-found-creative-way-dispose-leftovers-michelle-obamas-failed-lunch-program/
0 Replies
2
Reply Thu 15 Jan, 2015 09:43 pm
Has anyone ever eaten one of those whole wheat tortilla's that Washington demands replace real flour tortillas? I had one the other day. GROSS!
0 Replies
0
Reply Fri 16 Jan, 2015 02:50 am
The one ray of sunshine or good news in this wretched picture is that an entire generation of Americans appears to be learning to hate and fear the demoKKKrat party and some of those kids will be voting in 2016...
1 Reply
1
Reply Fri 16 Jan, 2015 02:58 am
@gungasnake,
gungasnake wrote:

The one ray of sunshine or good news in this wretched picture is that an entire generation of Americans appears to be learning to hate and fear the demoKKKrat party and some of those kids will be voting in 2016...


More importantly they are learning that lying and bullying are normal behaviors, that the liberals who whine about such things incessantly are full of **** because they do it all the time, that adults lie, that with the adults fantasy often trumps reality, that the state can not be trusted to look after their best interests, that they need to do it themselves, and that it kinda sucks to be treated like a pet, fed only the right scientific meal taste and enjoyment be damned.

We’ve reported about the miserable lunches children are being served under Michelle Obama’s school lunch plan.

Hundreds of students have posted images of disgusting, paltry meals on social media to expose the failure of Michelle’s lunch program, and it looks like their messages are hitting home.

Instead of actually doing something about the lunches themselves, the U.S. Department of Agriculture has decided to fight back by posting their own pictures of school lunches.........

but 129 calories is 8% of the recommended cal intake for kids 8 -13, and looking at the above stats it appears that the only things that raisons deliver well are sugar and Potassium.

These people who decide what kids get served seem to live in fantasyland as doing this calorie/nutrition delivered for most of the fruits that they are now pushing shows that the best thing fruits deliver is sugar.
0 Replies
0
Reply Sat 25 Jul, 2015 06:43 am
http://www.headlinepolitics.com/one-school-district-finally-figured-michelle-obamas-healthy-school-lunches/

More U.S. school districts have decided to opt out of the National School Lunch Program championed by First Lady Michelle Obama due to the rising cost of food waste caused by it.
Thomas Novelly of The Washington Free Beacon reported that 1.2 million students have dropped out of the program since its implementation in 2012. The remaining students in the program, however, continued to throw out their food. This caused the total food waste to reach $1 billion

I am surprised that more people have not handed over the stick up money to Washington and gotten out. More should. Then they should sue Washington and point out that these demands are not grounded in science, they do not allow proper nutrition to special needs students (athletes to name one set), the salt limits are dangerous, and the high amount of fruit sugars is very iffy so far as health of the students go. And the food sucks.
0 Replies
0
Reply Sun 26 Jul, 2015 02:24 am
Once again, the most basic rule of child nutrition: If the child cannot or will not eat it (like, if it's basically too ****ing horrible to eat): then the sum total nutritional value is ZERO!!!

0 Replies
-1
Reply Sun 26 Jul, 2015 02:30 am
What's the problem of giving them something they will eat and make school a happier place ? It is a total diet that will make you healthy, and 5 lunches a week that are nutritious and delicious can be included in a healthy life style . It is up to the parents .
1 Reply
0
Reply Sun 26 Jul, 2015 02:45 am
@Ionus,
People like Mike Obunga feed on human misery. He would not be happy in paradise...
1 Reply