Forums: News, Medical, Spinal, Medical Breakthrough
Email this Topic • Print this Page
Reply Tue 21 Oct, 2014 05:33 am
"A paralysed man has been able to walk again after a pioneering therapy that involved transplanting cells from his nasal cavity into his spinal cord.

Darek Fidyka, who was paralysed from the chest down in a knife attack in 2010, can now walk using a frame.
The treatment, a world first, was carried out by surgeons in Poland in collaboration with scientists in London.
Details of the research are published in the journal Cell Transplantation.
BBC One's Panorama programme had unique access to the project and spent a year charting the patient's rehabilitation.

Darek Fidyka, 40, from Poland, was paralysed after being stabbed repeatedly in the back in the 2010 attack.
He said walking again - with the support of a frame - was "an incredible feeling", adding: "When you can't feel almost half your body, you are helpless, but when it starts coming back it's like you were born again."

Prof Geoff Raisman, chair of neural regeneration at University College London's Institute of Neurology, led the UK research team.
He said what had been achieved was "more impressive than man walking on the moon".

The treatment used olfactory ensheathing cells (OECs) - specialist cells that form part of the sense of smell.
OECs act as pathway cells that enable nerve fibres in the olfactory system to be continually renewed.

In the first of two operations, surgeons removed one of the patient's olfactory bulbs and grew the cells in culture.
Two weeks later they transplanted the OECs into the spinal cord, which had been cut through in the knife attack apart from a thin strip of scar tissue on the right. They had just a drop of material to work with - about 500,000 cells.

About 100 micro-injections of OECs were made above and below the injury.
Four thin strips of nerve tissue were taken from the patient's ankle and placed across an 8mm (0.3in) gap on the left side of the cord.

The scientists believe the OECs provided a pathway to enable fibres above and below the injury to reconnect, using the nerve grafts to bridge the gap in the cord.

3) Four strips of nerve tissue were placed across an 8mm gap in the spinal cord. The scientists believe the OECs acted as a pathway to stimulate the spinal cord cells to regenerate, using the nerve grafts as a bridge to cross the severed cord.

Before the treatment, Mr Fidyka had been paralysed for nearly two years and had shown no sign of recovery despite many months of intensive physiotherapy.

This programme of exercise - five hours per day, five days a week - has continued after the transplant at the Akson Neuro-Rehabilitation Center in Wroclaw.

Mr Fidyka first noticed that the treatment had been successful after about three months, when his left thigh began putting on muscle.
Six months after surgery, Mr Fidyka was able to take his first tentative steps along parallel bars, using leg braces and the support of a physiotherapist.
Two years after the treatment, he can now walk outside the rehabilitation centre using a frame.
He has also recovered some bladder and bowel sensation and sexual function.

Dr Pawel Tabakow, consultant neurosurgeon at Wroclaw University Hospital, who led the Polish research team, said: "It's amazing to see how regeneration of the spinal cord, something that was thought impossible for many years, is becoming a reality."


Mr Fidyka still tires quickly when walking, but said: "I think it's realistic that one day I will become independent.
"What I have learned is that you must never give up but keep fighting, because some door will open in life."

The groundbreaking research was supported by the Nicholls Spinal Injury Foundation (NSIF) and the UK Stem Cell Foundation (UKSCF)
UKSCF was set up in 2007 to speed up progress of promising stem cell research - the charity has to date contributed ￡2.5m
NSIF was set up by chef David Nicholls after his son Daniel was paralysed from the arms down in a swimming accident in 2003.
To date the charity has given £1m to fund the research in London and a further £240,000 for the work in Poland.

A key difference with Mr Fidyka was that the scientists were able use the patient's olfactory bulb, which is the richest source of olfactory ensheathing cells.
This meant there was no danger of rejection, so no need for immunosuppressive drugs used in conventional transplants.

Most of the repair of Mr Fidyka's spinal cord was done on the left side, where there was an 8mm gap.
He has since regained muscle mass and movement mostly on that side.

Scientists believe this is evidence that the recovery is due to regeneration, as signals from the brain controlling muscles in the left leg travel down the left side of the spinal cord.
MRI scans suggest that the gap in the cord has closed up following the treatment.

None of those involved in the research want to profit from it.

Prof Geoff Raisman said: "It would be my proudest boast if I could say that no patient had had to pay one penny for any of the information we have found."

NSIF said if there were any patents arising, it would acquire them so as to make the technique freely available......." 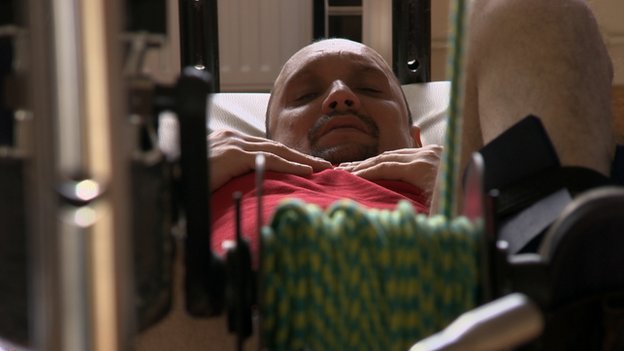