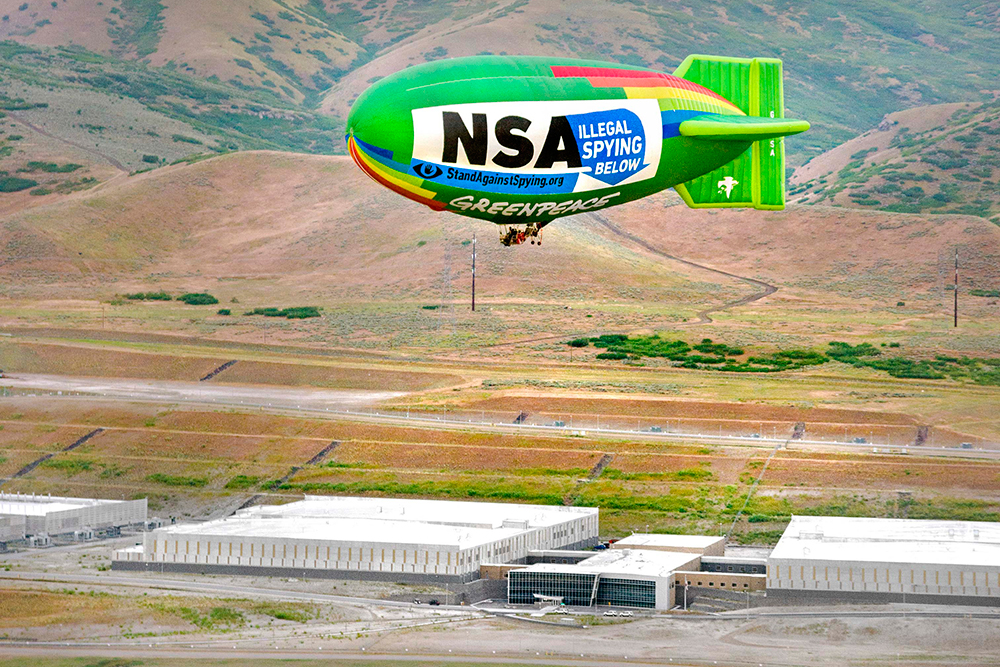 Plenty of nightmare surveillance theories surround the million-square-foot NSA facility opened last year in Bluffdale, Utah. Any locals driving by the gargantuan complex Friday morning saw something that may inspire new ones: A massive blimp hovering over the center, with the letters NSA printed on its side.

Activist groups including the Electronic Frontier Foundation and Greenpeace launched the 135-foot thermal airship early Friday morning to protest the agency’s mass surveillance programs and to announce the launch of Stand Against Spying, a website that rates members of Congress on their support or opposition to NSA reform. The full message on the blimp reads “NSA: Illegal Spying Below” along with an arrow pointing downward and the Stand Against Spying URL.

“We thought it would be fun to fly an airship around the Utah data center, which in many ways epitomizes the NSA’s collect-it-all strategy,” says Rainey Reitman, an activist at the Electronic Frontier Foundation. “We wanted to have a way to symbolize that our movement is getting quite confrontational with NSA surveillance in a visceral way.”

The protestors launched the blimp, which is owned by Greenpeace and named the AE Bates after a longtime Greenpeace volunteer, at 6 a.m. to capitalize on calm weather. They flew it 1,000 feet over the Bluffdale facility.1

The stunt was timed, Reitman says, to approximately a year after the political debate on NSA spying began. “Many members of congress have acted as roadblocks or sat on the sidelines of this debate,” she says. “The time had come for us to be very honest with the general public about those who have and haven’t called for NSA reform.”
The view some Utahns were perplexed by on this morning's commute. 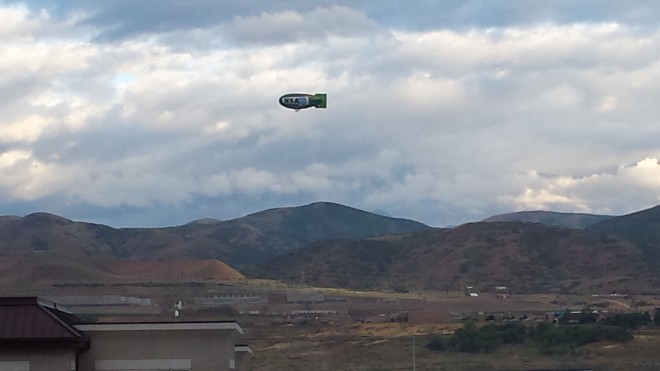 The view that perplexed some Utahns on their morning commute. Name Withheld

Greenpeace became involved in the project as a plaintiff in a lawsuit the EFF filed against the NSA last year, which accused the agency of intimidating activists with its mass phone metadata collection programs. Their blimp has made earlier appearances to protest coal-fired power plants in North Carolina, overfishing in the pacific northwest, and the Koch brothers in Southern California.

Reitman says they can rest assured the blimp isn’t a menacing new surveillance technique. “The only people we’re surveilling with this airship is the NSA.”

Taking a selfie with @GreenpeaceUSA above the NSA data center in Utah was definitely necessary. More pics soon! pic.twitter.com/A1Q9ZgjAve

1Correction 1:00pm EST 06/27/2014 An earlier version of the story cited Reitman as saying the blimp was launched at 4:30 am. In fact, a Greenpeace official says it was launched at 6am local time.