As far as I know, this is a public holiday all over Europe.


Berlin has its "special Mayday traditions":

However, it has been calmer than the last few yeras: only 111 arrested and 54 policemen slightly hurt.
0 Replies
1
Reply Sat 1 May, 2004 07:01 am
It should be noted that May Day, as an international holiday dedicated to labor, has its origins in Chicago. In May, 1886, mass protests were staged in support of the eight-hour day and other pro-labor legislation. Many of the more militant workers, as is apparent from this handbill, were Germans: 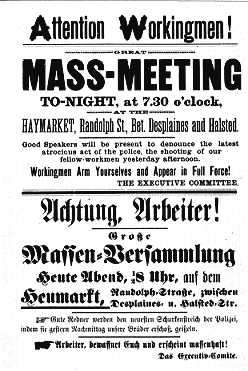 A march was held on May 1, and a rally, scheduled for the Haymarket Square on the near west side of Chicago, for May 4. And the rest, as they say, is history.

Internationally, the Marxists picked up the tradition of May Day from the anarchists, who set May 1 to commemorate the first march by the Chicago labor protesters. The United States, however, celebrates Labor Day in September, no doubt to distance its own celebration from that of the dreaded commies.

As a side note: for many years there was a statue of a policeman at the site of the Haymarket "massacre," which was the constant target of vandals (as explained in the foregoing link). Ultimately, the statue was dismantled (it is now at Chicago's police academy). A new monument is to be erected at the site, which will be dedicated to the ideals of the labor movement and, it is hoped, it will be less of a political target.
0 Replies
1
Reply Sat 1 May, 2004 07:51 am
Thanks, Joe!

Just another pic, where we can see those Huns :wink:

Scene of the Chicago bomb throwing and vicinity: together with portraits of persons convicted of complicity therewith, May 4th 1886.

Composite image showing individual large views of 3 buildings near Haymarket Square with small portraits of the men convicted in the Haymarket Affair trial arranged in a loop across the face of the card, from left to right: August Spies, Louis Lingg, Samuel Fielden, Adolph Fischer, George Engel, Oscar Neebe, Michael Schwab, and A. R. Parsons. The 3 buildings are Grief's Hall, Crane's Manufacturing Company, and David Bradley Manufacturing Company. The view of the Crane Company building shows the adjoining alley with a label: "place where the bomb was thrown."
0 Replies
1
Reply Sat 1 May, 2004 09:50 am
I'm curious: Can anyone tell me if May Day is celebrated in the US?

Not where I live.

In 5 days though, we sorta celebrate Cinco de Mayo, which is only an excuse to eat Mexican food and get drunk.
0 Replies
1
Reply Sat 1 May, 2004 01:38 pm
This day, btw, 210 years ago, on May 1, 1794, the Federal Society of Journeymen Cordwainers (shoemakers) was organized in Philadelphia to negotiate wages for its members, becoming the first trade union in the United States.
0 Replies
1
Reply Sat 1 May, 2004 02:02 pm
Jeez - I thought it was a celebration for Possum's birthday. Possum was 5 yesterday.

I tell him that, as he's moving to advanced years, he has to behave like a grown-up. He just ignored me, as usual!
0 Replies
1
Reply Sat 1 May, 2004 08:35 pm
in canada the 1 st of may is not celebrated as labour day. the first monday of september is labour day and a official holiday. in toronto, at the canadian national exhibition (which runs from about august 20 to labour day) it is marked with a march of many labour organizations. in other places it's a day for having fun during the day and ending the day with fireworks displays. in canada we have to wait until may 24 to celebrate "victoria day" in honour of good, ole queen victoria ! again, there'll be lots of fireworks on that occasion. hbg
0 Replies
1
Reply Sat 1 May, 2004 11:09 pm
Thanks for the information, joefromchicago & Walter.

I love the idea of workers of the world uniting to celebrate their struggles & achievements.
0 Replies