The Delusions of the LEFT

The fact that our nation is moving to embrace marriage equality cannot come as a surprise to anyone with a sense of our country's history. We are by our nature a progressive nation -- it's one of the reasons we are an exceptional country. True, It may take a great deal of blood, sweat and tears, but we move forward. We have seen this from the fight for women's right to vote, to ending segregation, to striking down laws that banned interracial marriage.

we have far more people in prison than most countries
more people die in violent deaths than most countries
we have massive income and potential inequities
we have broken education/justice and health systems
we have broken government
we are massively in debt
the economy does not work
we have a third world passenger rail system
50 million americans rely on food stamps
we become increasingly despised around the world no matter which party runs Washington
todays youth are the first generations in a very long time that can expect to have a lower standard of living than their parents,,the American dream is dead dead dead.

BUT THE GAYS ARE GETTING THEIR RIGHTS, WE ARE GREAT! 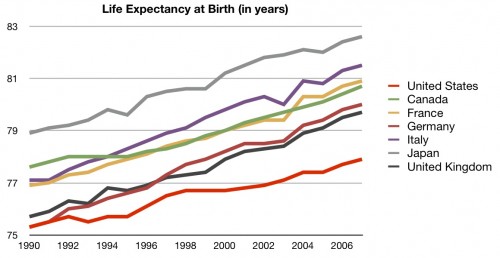 WOW. I am so impressed!
0 Replies
2
Reply Sat 28 Dec, 2013 05:39 pm
@hawkeye10,
You make a nice point, but why is this a "delusion of the LEFT"? The most common proponents of "American Exceptionalism" are from the right. I think the people who would agree most with your comments are the lefties you abhor.
1 Reply
1
Reply Sat 28 Dec, 2013 06:13 pm
@engineer,
the left and the right both suffer from massive delusions. the right delusion list includes stuff like
trickle down ecomomics
faith in our military power to solve global political problems
faith in markets to promote humanity
blah, blah, blah....that would be another thread.

thing is that I have not generally been hearing from the Right how great america is, their line is more "America is going to hell in a handbasket"
1 Reply
0
Reply Wed 1 Jan, 2014 07:48 pm
@hawkeye10,
faith in our military power to solve global political problems

Speaking of delusions, Hawk, that's a bigger. USA military power has never ever been about solving global political problems. It's all about causing them so the USA has an excuse to rape and pillage another country or two or ten.

You really oughta consider getting up to speed on the history of the USA.
0 Replies