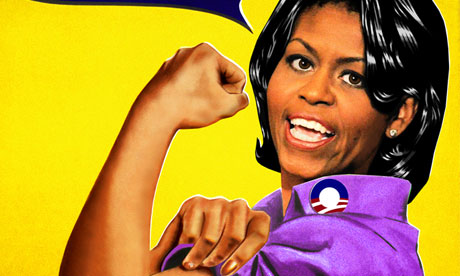 On a more serious note, it got a little syrupy for me, but I only saw a few highlights. She impressed me on Colbert and the Daily Show.
0 Replies
1
Reply Sun 9 Sep, 2012 01:01 am
She delivered the best speech of the convention although she was guilty of overacting. I'm sure that in that venue all of her rhetorical techniques came across splendidly, but on the "small" screen they were overblown.

The repetitive use of "You see..." for example.

She did her job at the convention as best she possibly could.

Anyone listening to her has to believe she really loves and believes in her husband and that both she and he love their children.

Frankly, I had a hard time squaring her patriotic fervor with her comment that her husband's nomination was the first time in her adult life that she was proud of her country, but I give her all due credit for her work with returning veterans.

Her primary objective was to rekindle the 2008 spirit of Hope & Change and only time will tell if she was successful in that regard.

Clearly the delegates were as mad for her as the true-believers in this forum, but such folks were always going to go to their polling place on Nov 6th and vote for her husband.

I can't imagine that any speech is going to get the same number of people out there voting for her husband as the 2008 Hope & Change campaign did. He may still win but, barring a revelation that Romney sacrifices children to the Angel Mormoni, it will be a real squeaker.

She had to try of course.