ooold confederate war document i have

Forums: History, War, Confederate, Civil, Flag
Email this Topic • Print this Page
Reply Sat 25 Feb, 2012 01:12 pm
can someone tell me where i can begin looking for info about this old confederate war document i found. it has a real piece of the first flag attached it was wrote by a laura lee rodgers , i think is the daughter or neice or something of general rodgers. i cant really find nothing through google. im trying to see if anyone has info as to someone who could giev me info on it or where to begin looking.
Type: Question • Score: 0 • Views: 1,962 • Replies: 2
No top replies
1
Reply Sat 25 Feb, 2012 05:15 pm
You want to DESCRIBE this document???

How can you expect any information when you don't tell us anything about it?

0 Replies
2
Reply Sat 25 Feb, 2012 05:24 pm
@karmaslove,
I've never heard of a General Rodgers in Confederate service, which is not conclusive, but if there were such a man, he was pretty obscure. I am very well informed on this subject. "The first flag" is a meaningless phrase--there were several flags used by various forces in Confederate service. The one flag which might qualify was known as "the Bonnie Blue flag." 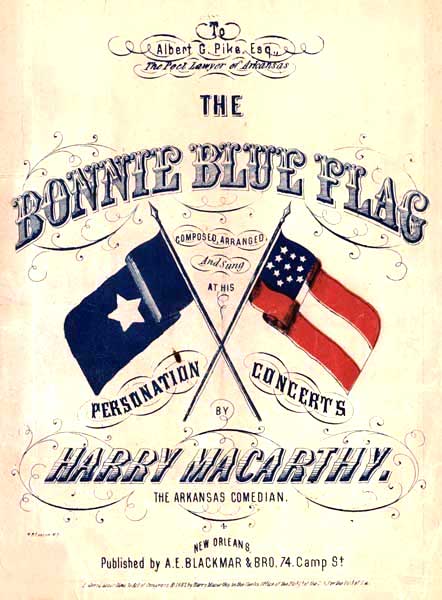 The flag on the left, the white star on the blue field, is "the bonnie blue flag." This sheet music is dedicated to Albert Pike. Albert Pike was a Massachusetts yankee who went west while still relatively young, and who eventually settled in Arkansas. He traveled extensively among the Indian tibes west of the Mississippi, especially in the Indian Territory (modern Oklahoma). Pike was commissioned a Brigadier General in Confederate service, and given command of the Indian Territory.