Didn't Donald bouffant try to buy himself a shot at the prez job?

He needs someone to come along and tell him "you're fired".
0 Replies
1
Reply Wed 7 Nov, 2012 04:34 am
I just tried to watch a bit of Foxnews to see if I could catch Rovexplosion. Caught some O'Reilly Factor with a super panel of conservative women.

One commented that younger voters drifted to Obama on issues that concerned them - gay marriage, student finances. Another one said they should care about the economy and getting a job. The first one said, 'You're missing the point I'm making, this what they are concerned about' the other kept trying to talk over the top of her saying 'The economy is much more important'.

Just to reiterate, they were both conservative/republican. I think that spelt out what's been brewing and what will continue to divide that side of politics. There's a thinking section and a feeling section and they don't join up. I am very interested in whether the repubs turn their backs on the tea party side of their family to try and reach out to groups they've marginalised (in the political dialogue) or whether they think the problem was that they weren't far enough right.
1 Reply
3
Reply Wed 7 Nov, 2012 04:45 am 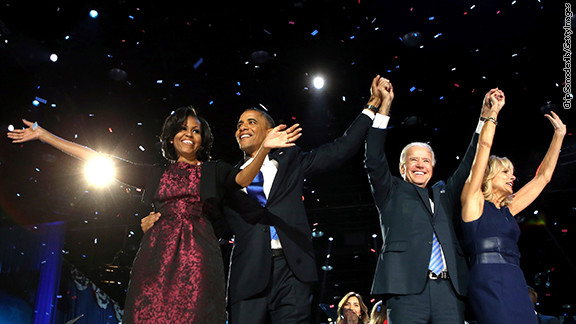 When I put myself in the position of having to decide on a future for my imaginary American offspring, I'd be looking at the huge debt ceiling (remember that congress almost said "let's fold, we're outta here" on the debt debate, and it's not long until again that debate will have to take place. Will the prez allow the fed res to run the presses, and prop up the banks again? Or does he have any say in that matter at all? Interest rates can't fall any further than zero. Something has to give. No bubbles left to burst are there?

The prez, despite appearances, is no more or less warloving than the last one, the difference being that the VP played a more active role, last time. We hardly hear a peep from the veep this time around. Not that I'm complaining. Cheney never once found favour with me or mine.

On the T-potty, when I found out that the Koch bro criminal syndicate were behind the movement, it was clear that the right needed to distance themselves severely from the happy brigade, and negate any influence from them at all. That was a fail all around.

The Koch bros are killers. There's no escaping facts. The T-potty are the Koch's arms and legs in the community. A poison seeping into society, just like their factories are poisoning communities across America.

There's where your failure lies, people. Address your real issues. Out these killers, and take back your EPA and FDA. Both agencies are corrupted totally, and acting like a gestapo movement within your borders.
0 Replies
1
Reply Wed 7 Nov, 2012 06:10 am
@sozobe,
Remember how depressed everyone was in mid-October?

Some more thoughts on this and the election in general:

After the 47% thing, Obama's campaign was looking very, very good. He was getting big leads in lots of places, I started seeing the word "landslide," Intrade and Nate Silver and such had him as the overwhelming favorite. I thought "uh-oh."

It was too big of a swing in an election that had been pretty close. And I don't think the circumstances currently point to a landslide. If the economy suddenly roars to life, if Romney does something truly awful, (etc.), I can imagine it. But I don't think it's likely.

So I think a correction was pretty much inevitable, for a few reasons.

First, when we get these polls of uncommitted voters, it's not all the same people who are first drifting one way and then another. New people keep making up their minds. And there can be a "wait a minute, this isn't over" reaction.

Secondly, and more importantly, I think the media is much more interested in a close race than a blow-out. That affects what stories they report and how they report them. Which in turn affects what the chatter is about and how people feel about the candidates.

Things were shifting back to Romney before the first debate. The debate fit into the emerging narrative really well, and accelerated things.

I don't know if this debate will be take things too far the other way -- probably not. But I think it will help. (Barring some disaster.)


I said "definitive," I meant "decisive." But yeah, that was pretty close to how it went.

I went to bed when the news called Wisconsin for Obama, so I haven't heard the vote totals yet.
2 Replies
2
Reply Wed 7 Nov, 2012 06:44 am
I'm still getting my head around all the implications.

ACA is a done deal.

I didn't know that.

Hey Kick. Just got power back at 11:00 am today. Over a week without power, lights, Internet, land line phone...and my cell would not work because the towers were compromised until yesterday or the day before.

I went to bed when the news called Wisconsin ...


There is much at stake. Pity the folks trying to build up their retirement accounts and today face a fall in the DJIA of 318. This situation hurts the little folks ( i.e. the Obama fans ) much more than it does the Romney fans.
1 Reply
2
Reply Wed 7 Nov, 2012 11:25 am
@Miller,
It's so dire until you get back to reality and realize the DJIA was up 200 points from Monday opening.
0 Replies
-2
Reply Wed 7 Nov, 2012 11:29 am
@Region Philbis,
Region Philbis wrote:


I'll bet the homeless and cold folks on Staten Island and NJ loved to see the above photo. And the really sad thing is , of course, the homeless and cold probably voted for Obama.
3 Replies
3
Reply Wed 7 Nov, 2012 11:32 am
@hingehead,
Somehow I never pictured Donald Trump on a barricade. Wouldn't that be bad for his hairpiece?
0 Replies
2
Reply Wed 7 Nov, 2012 11:37 am
@sozobe,
sozobe wrote:

Intrade and Nate Silver and such had him as the overwhelming favorite. I thought "uh-oh."

And they were right. Remember, their bet was on the chances of Obama winning, not on the margin of his victory. And those chances were always good, even after the first debate. If it seemed any different to you, you've wasted too much of your time reading commentators who eschew the statistical legwork and pivoted into lofty talk about "momentum".
1 Reply
-2
Reply Wed 7 Nov, 2012 11:39 am
@Miller,
Lord, I just love that IGNORE button to death.
1 Reply