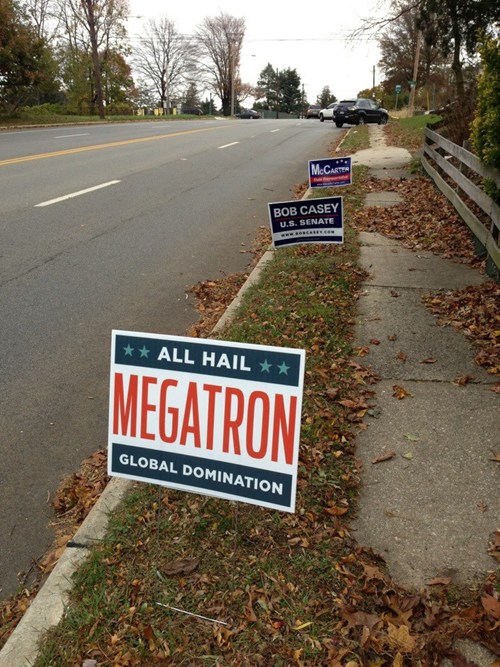 I didn't suggest that low levels of oil production would necessarily create a boom, and I think you know that.

Indeed. My impression was that you said high levels of oil production would boost the economy. And sure enough, the rest of your response indicates that you do indeed believe that. My counterpoint was, and is, that it doesn't. Oil production is a tiny fraction of America's GDP. It just isn't big enough to make much of a dent in the variables you list --- not on a national scale.
0 Replies
2
Reply Tue 6 Nov, 2012 05:56 pm
@DrewDad,
To prove that the US economy improved since Obama took over, the number of millionaires in the US increased.

Gabriel Marcus a moment ago

My son said ˝Romney is full of ****˝ (true) but I told him not to judge worthless cocksuckers.

Electoral college votes will be favorable to US President Barack Obama, according to the latest forecast by the Nomura economic research team on Tuesday’s Election Day, November 6, 2012. Nomura noted that the number of electoral college votes in favor of the Democrat President rose to 242 against the GOP‘s 180.
The research team reported that the 2012 US Presidential elections will be very close. Nomura expects Obama to win a second term over Republican candidate Mitt Romney.

Based on the Nomura forecast, Obama will be re-elected because he will get two-percentage points, translated into 35 electoral college votes, from four states that include New Mexico, Nevada, Iowa, and Ohio.

The Nomura analysts also predicts that the Republicans will still be in control of the House while the Senate will slightly be in favor of the Democrats.

0 Replies
1
Reply Tue 6 Nov, 2012 06:22 pm
If Obama wins I predict the average IQ of the USA will increase significantly And fuel is 8 bucks a gallon, plus GST and a carbon tax.

That's really funny! The tax rates in Australia is much higher than ours, and they have 'universal health care.'

We also have a minimum award wage that people manage to survive on without food stamps.

Australia's minimum wage is $15.96 per hour or $606.40 per week. Generally, employees in the national system shouldn't get less than this.

Oh, that amount wasn't wasted money - it was money that couldn't be accounted for at all. They didn't know who it was given to and didn't know what happened to the pallets of cash.

The wasted amount is many multiples of that total.

Oh, that amount wasn't wasted money - it was money that couldn't be accounted for at all. They didn't know who it was given to and didn't know what happened to the pallets of cash.

The wasted amount is many multiples of that total.


No you are wrong.


Sorry, but it is you that are incorrect here:

Missing Iraq money may have been stolen, auditors say
U.S. Defense officials still cannot say what happened to $6.6 billion, sent by the planeload in cash and intended for Iraq's reconstruction after the start of the war.
June 13, 2011|By Paul Richter, Los Angeles Times

Reporting from Washington — After the U.S.-led invasion of Iraq in March 2003, the George W. Bush administration flooded the conquered country with so much cash to pay for reconstruction and other projects in the first year that a new unit of measurement was born.

Pentagon officials determined that one giant C-130 Hercules cargo plane could carry $2.4 billion in shrink-wrapped bricks of $100 bills. They sent an initial full planeload of cash, followed by 20 other flights to Iraq by May 2004 in a $12-billion haul that U.S. officials believe to be the biggest international cash airlift of all time. For the first time, federal auditors are suggesting that some or all of the cash may have been stolen, not just mislaid in an accounting error. Stuart Bowen, special inspector general for Iraq reconstruction, an office created by Congress, said the missing $6.6 billion may be "the largest theft of funds in national history."

I strongly implore you to start looking things up before posting on A2K.

And tipping is not obligatory!

Yes, but I still do it if the service is particularly good.
0 Replies
1
Reply Tue 6 Nov, 2012 07:25 pm
Pinellas County is almost fully in and President Obama has won there. Hillsborough has only reported 35% in and Romney has pulled ahead slightly there. Obama is blowing it out of the water with Miami and Orlando precincts though.

Now northern Florida will be another story, thousands of crackers living there!
2 Replies
2
Reply Tue 6 Nov, 2012 07:36 pm
@MMarciano,
Thanks for the update on FL.
0 Replies