Fossils are all over Mars, period.

Exhibit 1: Numerous fossilized organic molecules have been found in many meteorites as shown in the following links:
http://en.wikipedia.org/wiki/Murchison_meteorite#Organic_matter
http://www.nasa.gov/topics/solarsystem/features/left_hand_aminoacids.html

Exhibit 2: Many types of fossilized cells have been found in meteorites. The cell types include red blood cells of mammals, white fat cells, muscle cells, and epithelial cells as shown in the following links:
Edit [Moderator]: Link removed

(B) “Although ejecta from the moon and Mars are associated with several known meteorites, the parent bodies for vast majority of all meteorites on Earth are the asteroids.” (quoted from the third paragraph of article by Richard Hoover at http://journalofcosmology.com/Life100.html)

(C) Asteroids originated from Mars as asteroids had no suitable environment to sustain numerous animals evidenced in Exhibit 3.

0 Replies
-3
Reply Thu 11 Aug, 2011 05:30 am
@Setanta,
You clowns will most definitely not be laughing on the day that Russians or Iranians get to Mars for a look at some of this stuff while NASA, as per Bork Obunga's' orders, is still attempting to assist slammites with their self esteem issues.

1 Reply
1
Reply Thu 11 Aug, 2011 05:37 am
@gungasnake,
You have alleged that you have me on ignore. I look forward to the next time you butcher history, when you can read it and weep as i show you up for the fool and bullshit artist that you are.
0 Replies
0
Reply Thu 11 Aug, 2011 05:40 am
Your Mars anomalies site is hilarious. Click on "Home," then click on the "About Us" link. It begins with the author making slighting remarks about scientists, and then he informs us that he did reasonably well in school, but that he studied business, not science.

You wanna buy a bridge, Bubba?
1 Reply
2
Reply Thu 11 Aug, 2011 03:53 pm
@Setanta,
The presence of various amino compounds and organic molecules are NOT indicative of fossils. Thats total bullshit. The Murchison m,eteorite has several of the organic compounds but the dirty little secret is that the Carbon isotopes are C13 as the higher ratio. This clearly is a non living signature in a molecule. Bewildered wants to jump over logical hurdles by stating that organic molecules are fossil evidence.
The use of racemization, where the stereoisomers of amino acids are "dated" by their assembled mess of left v right handed "enantiomers" is also bullshit nwhen dealing with stuff like meteorites which are probably billion years old.

Cohen and Chyba have presented a paper with solid evidence of the non life sources of the amino acids in space )HOWEVER-it must be recalled that these molecules could certainly be used for formation of life but the C isotopes would "EVOLVE" to a high C12 ratio (just like the rocks of the ISUA FORMATION .

There are two mainways, it is thought, by which
amino acids make their way into meteorite parent bodies. The
first is through the Strecker synthetic process in liquid water
(Peltzer et al. 1984) on the parent body itself. This process requires
HCN, which has a limited e-folding half-life (0.37-life,
or the time in which the concentration decreases to 1=e of its initial
value) in liquid water at 273 K of »104 years (Peltzer et al.
1984). Thus, the amino acids would have been formed within
»104 years within the parent body. After 104 years, the synthesis
would be over (barring some source of HCN), but liquid water
might persist.
The second method is incorporation of amino acids into the
parent body through accretion of previously synthesized molecules
from the interstellar medium (ISM). Spectroscopic observation
of grains in the ISM (Pendleton et al. 1994) reveals
features attributable to the C–H stretch in organic material.
Flores et al. (1977) and Norden (1977) showed experimentally
that amino acids could have an enantiomeric excess imposed
by selective destruction by circularly polarized ultraviolet radiation,
such as that from the poles of a neutron star (Bonner
1991) or an active star-forming region (Bailey et al. 1998). The
conditions for creating such excesses are not uncommon, and
chiral excesses of up to a few percent may be created. It is not
known whether or to what degree the molecular cloud that collapsed
to form our solar nebula experienced these conditions.
However, ample evidence exists for incorporation of supernova
ejecta into meteorites (Zinner 1998); consequently, exposure of
this material to circularly polarized radiation from a neutron
star, the supernova residuum, might be inferred.

ANother thing about Murchison and Al;lende (Another chondrite with amino acid conatents) Most of the amino acids are signiicantly higher in deuterium as the hydreogen form in the molecules.

Conclusions, hevily evidenced inorganic sources
2 Replies
0
Reply Thu 11 Aug, 2011 06:34 pm
@farmerman,
http://www.google.com/#hl=en&cp=13&gs_id=1d&xhr=t&q=mars+crinoids&qe=bWFyc2Nmcmlub2lkcw&qesig=7CrNiUGvR9Z-gm3nhNoSkw&pkc=AFgZ2tnR1GhvlmePtcVpjrbOuPbnPeiVHoa4zh1QMUkfFosdyDUVzcF3kKR9Xe_NEu8j40chKL16EhTyPxU8tWlEuL-YttgYMQ&pf=p&sclient=psy&biw=1082&bih=727&source=hp&pbx=1&oq=marscfrinoids&aq=0lv&aqi=g-lv1&aql=&gs_sm=&gs_upl=&bav=on.2,or.r_gc.r_pw.&fp=c88d52fddef0ee5d
1 Reply
1
Reply Thu 11 Aug, 2011 06:48 pm
@gungasnake,
Im aware of Hoagland. HES A FUCKIN LOON who is merely media hungry. He used to be a regular guest on that overnight"UFOs are all over the place" show . I though he died .
There are plenty of pseudomorph forms from the photos taken by the Rovers. Crinoids? Im not so sure that he even knows what one looks like.
The fact that we have crinoids (All 3500 genera of them) through time, its easy to compare a segment of a crinoid columnal with the photo of something that looks similar isnt , by any means, a positive ID. If you believe Hoaglands bullshit, I suppose youd buy bewildereds.

Its like that "face " that everyone swore up and down was on the red planet. Closer inspection showed it was just some natural topographic feature.


The matrix and the "crinoid" are made of the ame exact mineralization. This doesnt occur with fossils. There is always some distinguishing textural or chemival difference.
What an amateur confuses as a "columna;" segment of a crinoid has no reason to be standing "proud" from the matrix. All columnals are found as segments withing the sediments or as layered upon the stratigraphic breaks (bedding planes). To me this looks like a "desert varnish" like feature that has been eroded by martian winds.
Course we will never know so you can spout off that its a crinoid all you want and we dont have the sample in our mitts do we> I believe thats how conspiracists and the Hoaglands do their best work (Where its impossible to refute with incontrovertible evidence)
1 Reply
1
Reply Thu 11 Aug, 2011 07:34 pm
@farmerman,
Richard Hoaglandis one of a fairly large number of people talking about crinoids on Mars and the topic did not originate with him as the google search url I noted indicates.
1 Reply
1
Reply Thu 11 Aug, 2011 09:19 pm
@gungasnake,
Then he is one of a many bunch of loons . Just because a bunch of people believe that Dick Cheney planned 9/11 doesnt make it true
0 Replies
1
Reply Fri 12 Aug, 2011 12:24 am
New edition:

Fossils are found in most meteorites (note A), which came from asteroids (note B), which originated from Mars (note C). So, fossils are all over Mars.

Exhibit 1: Numerous fossilized organic molecules have been found in many meteorites as shown in the following links:
http://www.panspermia.org/whatsnew65.htm#110613

Exhibit 2: Many types of fossilized cells have been found in meteorites. The cell types found include red blood cells of mammals, white fat cells, and epithelial cells shown in the following links:
http://wretchfossil.blogspot.com/2011/07/huge-mammalian-red-blood-cell-remains.html

Note (B): “Although ejecta from the moon and Mars are associated with several known meteorites, the parent bodies for vast majority of all meteorites on Earth are the asteroids.” (quoted from the third paragraph of article by Richard Hoover at http://journalofcosmology.com/Life100.html

Note (C): Asteroids originated from Mars as asteroids had no suitable environment to sustain numerous animals evidenced in Exhibit 3. 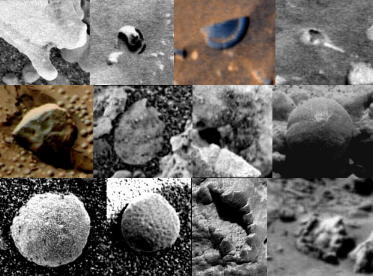 That proves meteorites are really fossils of dead meteors
http://www.time.com/time/health/article/0,8599,2087758,00.html