Forums: Pets, Dogs, Death Of A Pet
Email this Topic • Print this Page
Reply Wed 3 Aug, 2011 09:31 am
My son called me from Arizona yesterday morning that one of his dogs had died. He was sobbing with sorrow. Meagan, a Rhodesian Ridge-back, was a wonderful sweet dog that was devoted to my son. He had taken her and Buddy, his Labrador Retriever to the near by park for their daily play. Meagan was having a great time with no sign of illness.

When they came back home, Meagan suddenly began to show great pain and weakness. My son immediately took her to the vet. It was discovered that Meagan had an undiscovered cancer that had burst during her playing in the part. Nothing could be done to save her. My heart broken son held Meagan in his arms while the vet injected her to end her suffering and her life.

Now my son will look for a new Lab for his Buddy dog, who is constantly searching for his missing Meagan. It's so sad to see how hard it is for the loss of Buddy's mate.

Type: Discussion • Score: 9 • Views: 2,738 • Replies: 16
No top replies
2
Reply Wed 3 Aug, 2011 09:50 am
@BumbleBeeBoogie,
So sorry to hear this, BBB. I would like to suggest you send your son this book by Jon Katz. I recently read a large excerpt from it and thought the author handled the topic very well: 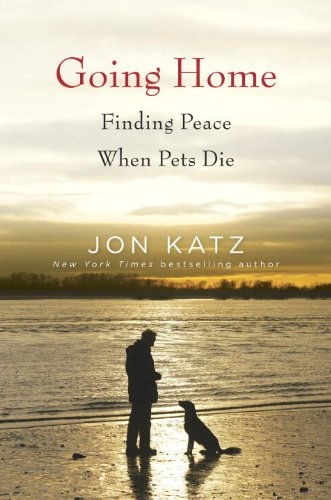 It's tough no matter what type of pet you have.

My wife and I have had cats for years, and we are very bonded to each and every one. This also includes my daughter's cats.
0 Replies
1
Reply Wed 3 Aug, 2011 11:20 am
@Green Witch,
I've ordered the book for my son.

BBB
0 Replies
1
Reply Wed 3 Aug, 2011 11:26 am
@BumbleBeeBoogie,
Rhodesian ridgebacks are such majestic dogs. My condolences go out to your son. At least Meagan enjoyed her last day on earth playing with her family.
0 Replies
1
Reply Wed 3 Aug, 2011 01:44 pm
Sorry, BBB.
0 Replies
2
Reply Thu 4 Aug, 2011 12:46 pm
@BumbleBeeBoogie,
Truly, I know the feeling. Right now, I am sitting at my desk after spending the last hour lying on the floor next to my 12 year old male Kuvasz Abba. Abba's pup pix is my avatar and he is literally on his "last legs." He has trouble rising onto his four legs, albeit can walk fine once up, but just seeing him struggle to get up breaks my heart. He has arthritis in his back legs, which has been alleviated by meds, but I know that shortly, a few days, perhaps weeks he will look at me and I will see that look in his eyes that tells me "enough, its time to go." It just breaks my ******* heart. Of all the dogs I have had, dozens over the past decades, Abba alone has never given me a moment of displeasure with his behavior. He has been the perfect companion and friend for over a dozen years, and has been the silliest dog I have ever had. ... its just getting very hard to write much more right now. so please, give Abba your prayers.

2 Replies
2
Reply Thu 4 Aug, 2011 01:49 pm
@kuvasz,
You are doing the right thing. I don't understand people who refuse to end their dog's suffering because they can't bear THEIR LOSS. It should about the dog and not the people. I've known some people who made their dogs suffer much longer than was humane. Some people can't bear to hold their pet while it's being euthanized. For me, it's the last time I can hold it and give it kisses of love.

1 Reply
2
Reply Thu 4 Aug, 2011 06:12 pm
@BumbleBeeBoogie,
Ah, so sorry your son lost his dog. I've had many pets, but remember most a black Pomeranian. He came from a pet shop, had been there 3 months. What a lovable creature, he would stand on his hind legs with arms outstretched when he greeted us, but also was afraid of everything, would run under the bed and poop when people visited. Actually, he was not really small like a Pomeranian and his thick hair stood straight out. I expect he was part Chow, as the owner raised Chows.

He was run over on a freezing snowy day in Michigan. God, how that hurt, his being killed like that. I think we took it so hard because we were experiencing uncomfortable tough times in our lives and this little nutty loving dog just made us feel better. I actually cried, and cried, would say to myself. Oh, God, Smokey can't we see you just one more time. One night I had this dream, where Smokey was just standing there looking annoyed. He was covered with dirt. Took a while, but that dream made we laugh, and that's better than crying. I still wonder, though, wtf, who is that hands out dreams?
1 Reply
1
Reply Thu 4 Aug, 2011 06:28 pm
@Pemerson,
Pemerson, you made me cry with your story.

During the recent years that I was disabled with my knee injury, my two dogs, Dolly and Madison, kept my spirits up. They are and were wonderful company for me because they both are so funny, sweet and loving. I was not lonely or sad when I couldn't go places.

0 Replies
2
Reply Thu 4 Aug, 2011 06:50 pm
@kuvasz,
A hug to Abba from here, Kuvasz.
1 Reply
1
Reply Sat 6 Aug, 2011 10:20 am
@ossobuco,
My son told me yesterday that he adopted a female Labrador Retriever/Pit Bull mix three month old puppy he named Cleo. Buddy dog is accepting the puppy but is still searching for his missing Meagan. I hope Cleo will help to ease Buddy's loss of his life-long pal. My son said the puppy slept with him last night and seems to like her new home.


Yes it is. It is very real grief.

And, after each time I've gone through such a loss, I've sworn I would never put myself through that again because it simply hurt too much. And, each time, I've always disregarded that and gotten another dog, and each of them brought something wonderful into my life.

I hope Cleo will help to ease the pain for Buddy and for your son. If nothing else, a new puppy is a welcome distraction at a time like that, even though hearts are still aching. I hope this is the start of another beautiful friendship.
1 Reply
1
Reply Tue 9 Aug, 2011 08:52 am
@firefly,
Unfortunately, Cleo puppy didn't work out for Buddy dog. My son found another home for her.

Buddy couldn't tolerate Cleo's puppy behavior. He is really suffering his loss of Meagan. He's not eating, he whines and searches around the house. He wants to be in my son's lap all the time, and he's a very large dog. It's worse when my son is not in the house. He's going through a variety of tests at the hospital preparing for hip replacement surgery at the end of this month. I don't know how Buddy will survive his absence while he's in the hospital for a few days.

Mourning a loss is difficult for both pets and people. It takes time. I've had both dogs and cats go through the loss of a person in the family as well as the loss of another pet--and it does take time, but adjustment does occur.

I think what Buddy is doing sounds fairly normal, and it's also a form of separation anxiety--he is, after all, separated from Meagan--which is why he wants to be physically closer to your son, and why it's worse when your son isn't in the house. And I'm sure it will be difficult for him when your son is hospitalized for his surgery.

It's hard to watch a pet go through such distress, particularly because there really isn't much you can do to alleviate it. At times like that I get most concerned about the not eating, so I try tempting the dog with whatever food, generally human food, is the most irresistible to them, and even if they only eat a little of it, it's better than not eating at all. Eventually they will get hungry enough to eat something.

Perhaps, after your son's surgery, he can try getting another puppy, an even younger one, closer to 8 weeks. And it might be a good idea to crate the puppy so it's not moving in on Buddy's turf, or sharing a bed with Buddy's main person. That way, Buddy can adjust to having a new presence in the house without it being another disruptive influence, and he can be allowed to interact with the puppy only for short periods and only in a very limited area of the house.

Dealing with loss is hard, and it does take time. I'm sorry everyone is going through such a rough patch.
0 Replies