What are some cartoons they should have made but didn't?

Forums: Movies, Animation, Cartoons, Tv Shows, All Media
Email this Topic • Print this Page
Reply Fri 29 Jul, 2011 08:08 pm
I can think of two. Pigs in Space was a segment on the old Muppet Show:

That could have worked in animated form, and they could have stretched it out into a half-hour series.

Short Circuit was a film series about a robot who thought he was alive:

A series based on these films would have been animation gold. Woodsy the Owl was a cutesy character -you're either daft or insane.

1 Reply
0
Reply Sat 30 Jul, 2011 03:00 am
They had environmentalism in the '80s - as far as know, they only promotions for it I can recall were Woodsy the Owl PSAs, Smokey the Bear PSA, some PSAs witha crying Native American and some little red cartoon cardinal that encouraged kids to plant trees.
0 Replies
1
Reply Sat 30 Jul, 2011 03:03 am
@JGoldman10,
JGoldman10 wrote:

Woodsy the Owl was a cutesy character -you're either daft or insane.

I'm insane? His arms are spread wide like the mummy, his eyes are blank and soulless.
0 Replies
0
Reply Sat 30 Jul, 2011 05:15 am
They should have made a Steve Urkel cartoon- a cartoon spin-off of Family Matters: 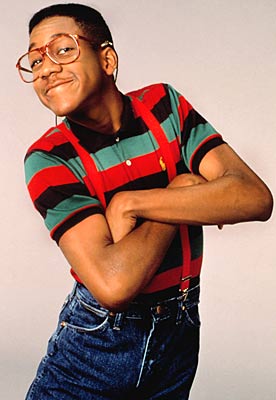 A cartoon spin-off of Perfect Strangers:

2 Replies
1
Reply Sat 30 Jul, 2011 05:53 am
@JGoldman10,
Under technicalities, Family Matters and the Urkel character were spinoffs from Perfect Strangers.

Harriet Winslow worked in the same place as Larry Appleton when he was working at The Chronicle. She then got her own show with the handsome Reginald VelJohnson (who might be gay) and the Urkel character came into being. By the end of the series run, Urkel had become something of a cartoon as had most of the cast and story lines (thanks to poor writing at that point), so technically, there's a Perfect Strangers cartoon spinoff and Urkel is a cartoon character.

Nearby on a similar island which is cloaked by a Romulan cloaking device, George Tenet and his staff are planning how to unleash a swarm of tickler mosquitoes on an unsuspecting underground nation. Drac Cheney is visiting to have his hologramming abilities restored. A flare shoots into the air and an image of Urkel appears. Tenet and his crew of men and women know there's danger and leap into their invisible magic manatee ship and head to the island where they rescue the stranded men. They return to the mainland and all is well as the credits roll.

Next week, Urkel and his nerds take on Lebanese bureaucrats.


You think there should be a series, then make it happen.
0 Replies
0
Reply Sat 30 Jul, 2011 07:00 am
IF you want to talk about cartoons based on video games, they could have done a series based on Dig-Dug:

They should have made a Steve Urkel cartoon- a cartoon spin-off of Family Matters:

A cartoon spin-off of Perfect Strangers:

Sport Goofy. I recall the classic Disney cartoons in which Goofy would demonstrate how to play various sports to often disastrous, comedic results. That could have worked as a cartoon series:

0 Replies
1
Reply Wed 19 Oct, 2011 12:34 am
Personally, I think JGoldman10 would make a hilarious cartoon series character. The would-be cartoonist who spends all of his time theorizing about cartooning, doing something he claims is "research" , instead of drawing cartoons. How boffo can one get? Over the top smash hit guaranteed.
0 Replies
1
Reply Wed 19 Oct, 2011 02:18 am
I don't know how many people remember the '80s series, Too Close For Comfort:

But Ted Knight's character on that show was a cartoonist and he had a comic strip called Cosmic Cow - they could have made a Cosmic Cow spin-off:

What are some cartoons they should have made but didn't?