I figure that would be a wild and wooly mess of situational difficulties.. town by town, region by region, mafia by mafia, politicians romping.. the vatican popping..

Where is Fellini now that we miss him so..

Well, this is a problem with the majority of Americans that now support marriage equality.

Tom DeLay: Americans Must 'Rise Up' Against SCOTUS If It Rules For Marriage Equality

Former House GOP leader Tom DeLay stopped by Houston talk radio host Sam Malone’s show last week to discuss his efforts to stay active in politics since leaving the House of Representatives in a cloud of corruption accusations, or, as Malone called it, “the persecution of Tom DeLay.”

DeLay said that despite attempts to “destroy him,” he is still “working on all kinds of political angles and issues,” such as his work with far-right activist Janet Porter convincing Sen. Ted Cruz and Rep. Steve King to introduce bills in Congress that would block the Supreme Court from ruling on same-sex marriage.

0 Replies
1
Reply Thu 28 May, 2015 06:57 pm
DeLay was guilty, but Republicans reversed a Democrat's court.
0 Replies
2
Reply Sun 31 May, 2015 07:14 pm
Think about it very carefully America, do you want a President that goes against Supreme Court decisions and pushes his/her own agenda and not the rule of law? If so then you believe in a dictatorship and not democracy. Sad state of affairs if the Republicans win the election but it's not like this halfwit will ever live in the White House.

Republican presidential candidate Rick Santorum said on Sunday that if the Supreme Court legalizes gay marriage later this year, he would dispute the decision, saying that the court "doesn't have the final word."

"Of course I'd fight it," he said on NBC's "Meet the Press." "Roe versus Wade was decided 30 some years ago, and I continue to fight that, because I think the court got it wrong. And I think if the court decides this case in error, I will continue to fight, as we have on the issue of life ... We're not bound by what nine people say in perpetuity."

Santorum justified his stance by arguing that the executive and legislative branches are obligated to challenge the judicial branch. 1 Reply
3
Reply Mon 1 Jun, 2015 04:28 pm
@jcboy,
Hmm seems there is a significant number of divorced heterosexual couples, which split family loyalties and feelings. Then there are those hetero families who are sticking it out or the children but the kids can sense what is going on. How can he quantify that gays have any less loving family units than heterosexuals? Seems presidential qualifying thought processes and conclusions should be based on verifiable facts. Is it even possible he could be dumber then is brother?

After reading his newest comments, it’s safe to say that Bush has firmly embedded himself in the tangled web of the Evangelical Christian right, hoping to win over their votes while not giving a damn about equal rights. Not only did Bush say that he doesn’t believe gay Americans should have the right to marry, but he basically said that they can’t be loving parents or provide good families for children. “I don’t, but I’m not a lawyer, and clearly this has been accelerated at a warp pace,” Bush said when asked if he thought marriage was a Constitutional right. “To imagine how we’re going to succeed in our country unless we have committed family life, a child-centered family system, is hard to imagine,” he continued. “Irrespective of the Supreme Court ruling, because they’re going to decide whatever they decide, and I don’t know what they’re going to do, we need to be stalwart supporters of traditional marriage.” Oh, but it gets even worse. “If we want to create a right-to-rise society, where people, particularly children born in poverty, if we want to have them have a chance we should be—a core American value,” Bush said, “we have to restore committed, loving family life with a mom and a dad loving their children with their heart and soul.” In other words, according to Jeb, gay couples apparently can’t provide loving, stable homes for children. Apparently he believes they also lack the ability to love “their children with their heart and soul.” And going by these comments, he seems to think that marriage equality will eventually lead to the downfall of the United States since he doesn’t understand how “we’re going to succeed in our country unless we have a committed family life” – which he clearly doesn’t believe gay parents can provide. He also went on to say that “absolutely” businesses should have the right to discriminate against homosexuals based on religious beliefs.

0 Replies
1
Reply Mon 1 Jun, 2015 04:37 pm
Seems guys like Jeb Bush and Rick Santorum ought to consider the fact that a significant number of homosexuals lobbying for same sex marriage...were born to heterosexual parents.

That should be factored in.

Our governor, Chris Christie, is reversing himself on so many issues it is becoming a merry-go-round. He became governor in a predominantly blue state by being as sane as a Republican can be on issues...but now that he want to be president, he has had to cave in to the bat-**** crazy element.

Seems guys like Jeb Bush and Rick Santorum ought to consider the fact that a significant number of homosexuals lobbying for same sex marriage...were born to heterosexual parents.

Not so, they were born in human factory machines... duh.

The ones lobbying for same sex marriage don't get it, they do exist because their parents did the right thing: a man and a woman coupling.

0 Replies
6
Reply Tue 9 Jun, 2015 03:56 pm
Good. Close all the hypocrite churches. Let's give them the insanity they keep predicting. Seize guns too. Why is it always the republicans? Idiots!

GOP Senator: Churches Could Be Forced To Close If Supreme Court Rules For Same-Sex Marriage

Watch as one Republican Senator wildly fear-mongers about what "could" happen if the Supreme Court finds a right to marriage equality.

Good. Close all the hypocrite churches. Let's give them the insanity they keep predicting. Seize guns too. Why is it always the republicans? Idiots!

Yes, close the hypocrite churches that accept homosexuals as members instead of sending them to Satan, like the first assemblies of the apostles did with sinners who didn't repent of their wrong doings and wanted to be part of the church anyway.

The point is that hypocrite churches which preach "love of God" seem to ignore in purpose that because God loves the righteous, is the reason why homosexuals were sent to be killed and society won't be exposed to such abomination.

Such is the great love of God to the ones who do good.

In the United States the law is not ruled by this biblical foundation, but churches can't concede and let impurity to enter into their doctrines and stain their souls allowing abominable actions between their members.

I think that righteous churches must enforce more information in the media exposing homosexuality not only against God but surely against nature.

If people don't want to believe in God, at least must learn that nature makes us a two gender species, and nothing else.

From here, the natural attraction is between a male and a female. Any other kind of attraction is abomination for nature as well.

See? It is amazing how the bible and nature are in 100% agreement about this topic.

And how disgraceful is to find out that people ignore it.

Gay Marriage legal in all 50 States!
2 Replies
4
Reply Fri 26 Jun, 2015 09:53 am
@EqualityFLSTPete,
This a2k hamsters won't mind if I double publish this glorious sentiment in this thread! Gay Marriage legal in all 50 States!

In a gay club, one of the dudes jumps over the counter and happy celebrates with the rest before getting sexually physical:

If this doesn't give you hope in love nothing else will. After 46 years of love and commitment, Lewis Duckett and Billy Jones publicly tied the knot at New York's Riverside Church.

The pair has reportedly been together since the days of the Vietnam War, with Jones having been deployed during his first year in the military. 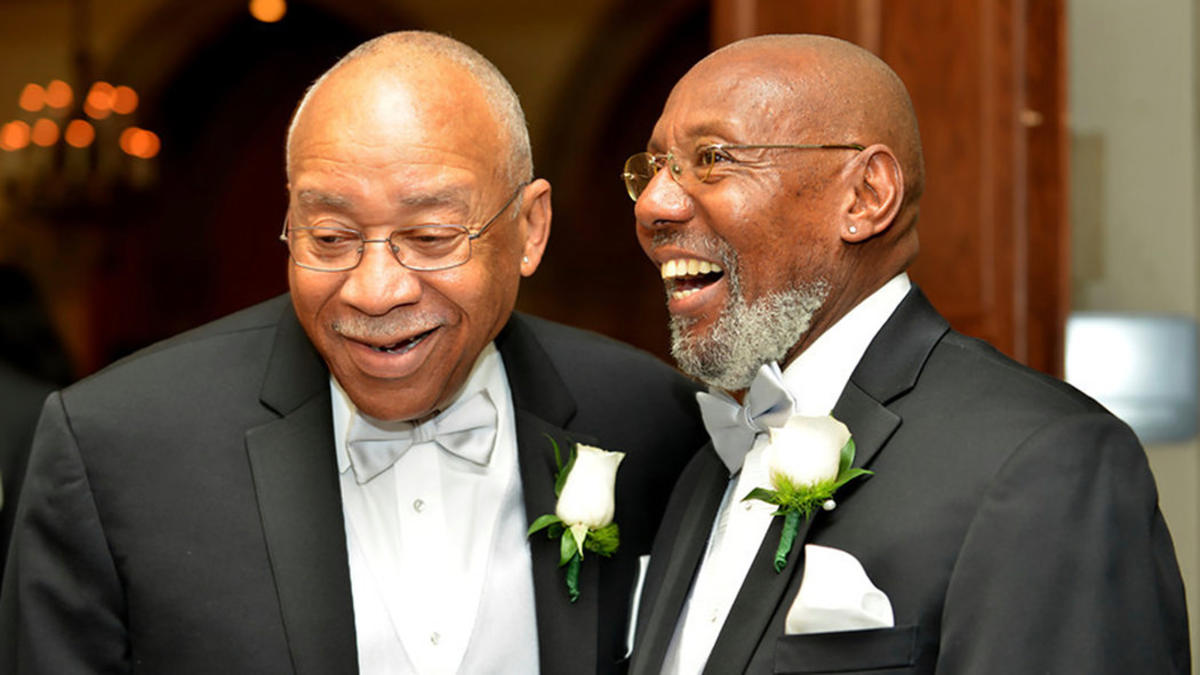 0 Replies
3
Reply Sat 11 Mar, 2017 09:12 am
So far, gay marriages are lasting on average longer than straight marriages. So some religious people are getting cranky and claiming (as they generally do) that marriage is "under attack" in some mysterious way, when the reality is just that we're doing your **** better than you.