What was your best decade?

I hate to break it to you, but art-wise, it's hard to improve on London. I'm not even sure New York has anything on it, and I like New York a lot. If you didn't like London, the rest of your art life will be one of pining and boredom. No more good decades for you, Miss!


Haha, oh no, Thomas! Not even New York? I was thinking of moving there for a bit, Berlin too...

New York's art scene is still thriving beyond any other grand city's imagination.

1 Reply
1
Reply Tue 21 Jun, 2011 07:21 pm
@tsarstepan,
She should go to the Guggenheim Museum. There was a movie where there was a lot of shooting and practically wrecked the exhibits. I think it starred Jason Statham movie.

Mistake it was the 'International' with Clive Owen (and Naomi Watts) the could have been James Bond. Haha, oh no, Thomas! Not even New York? I was thinking of moving there for a bit, Berlin too...

Both perfectly wonderful cities. Also, ehBeth made a very good sales pitch for Toronto to me once. I haven't had the opportunities to hear any concerts there, but I definitely like the vibe of the city.
0 Replies
1
Reply Tue 21 Jun, 2011 07:48 pm
@The Pentacle Queen,
My first school, a boarding school: 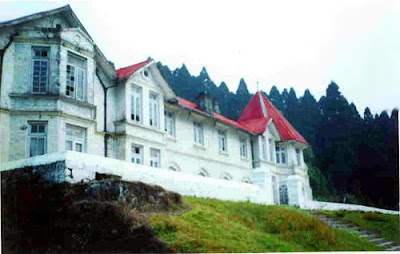 0 Replies
1
Reply Wed 22 Jun, 2011 07:17 pm
View of Kangchenjunga (third highest mountain in the world and I believe the most beautiful as it is almost symmetrical) from our school.

The big field where our school used to beat the richer schools in the sports' events.

The road and toy train to our school

The same view from Darjeeling

The school main building overlooking the big field. There is a field to the left of the main gray building where we used to stand in the sunshine as it is cold in the morning as the Catholics went to mass on Sundays. We had to pick up the garbage such candy wrappers if the Principal came around and saw them. His name was Brother Fitspatrick, very strict guy but fair. Till now I didn't know it was Jesuit school. From Google I found out it was a Jesuit school.

There is garden in front and we used to see the chameleons with there funny eyes pointing at different directions and fearsome looking. There were beehives there as well as lady bugs. We squished a few and a yellow fluid came out but after that we didn't do it again.
1 Reply
1
Reply Wed 22 Jun, 2011 07:45 pm
@talk72000,
I have to say that is the most colorful jesuit school I've ever seen, but I haven't seen other than colleges/universities.

This the the view facing the main building from the small boys fields. We had a lot fights in there. My best friend was an English boy. He had a funny way of dribbling. He would run with the ball and then he would place his foot on top of the football and propel it backwards so everyone following him would be yards ahead of him as he turns around to the football behind. He also said if he had a beautiful sister he would disguise himself and marry her. We were just kids so we were talking rubbish.

The classrooms building. There was no fence when I was a student.

They spruced up the school. Everything was dull during my time or maybe it's just my memories.

The new classroom is a lot bigger.

Hallway to the dining room.

The dormitory. Wow it brings back memories.

The new dorms which I never saw.

The games room. I don't remember too much about it.

One small Chinese student died from eating poisonous berries and another Indian student, also very small, boarded the toy train back and was found by the police hundreds of miles from school at the end of the toy train line. The trip required a boat ride and another train (regular) train ride to Calcutta.

0 Replies
-1
Reply Sat 25 Jun, 2011 11:27 am
@The Pentacle Queen,
You should visit Wall Street in New York to look at the world's biggest crooks at work and walking free.
0 Replies
2
Reply Sat 25 Jun, 2011 12:02 pm
20's were probably the best for me too! It's when I volunteered into the US Air Force for a four year term, and my motivation to do well woke up. It was a time when my confidence in myself grew, because the air force appointed me to work with nuclear weapons, and that in of itself proved I was not a lost soul. Most of the officers treated me well, and one in New Mexico even invited me to their home for dinners, because he was married to a Japanese woman, and he knew I missed my rice.

It was also the time when I was able to travel to Europe while stationed in Morocco, and that was when the travel-bug bit me. Been traveling ever since.

One of my oldest and dearest friend is a guy I met in Morocco, and we were able to meet in Austin a couple of years ago when I visited my son.